If Hello Beautiful was aware of the pressure going for a record-tying third Maryland Million win, she certainly didn’t show it as she led gate-to-wire in the seven-furlong $100,000 Maryland Million Distaff at Laurel Park on Saturday, Oct. 23. 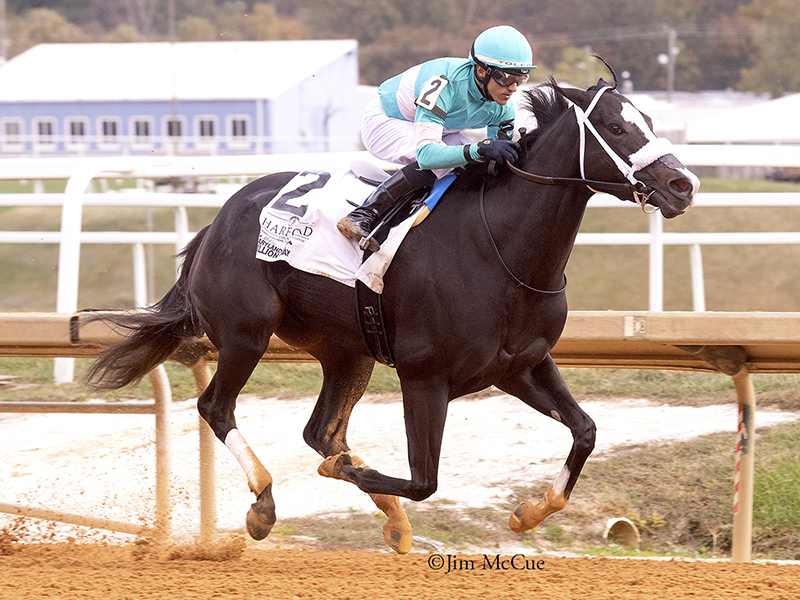 Sent off as the 1-5 favorite in a field six, Hello Beautiful took her usual position on the lead, with Malibu Beauty and Street Lute closest behind her, through an opening quarter-mile in :22.59. After hitting the half-mile mark in :45.65 and turning for home with a clear lead, any hopes of catching her were dashed as Hello Beautiful flew down the stretch. She crossed the wire three and a half lengths in front while completing the distance in 1:22.22. Malibu Beauty won the battle for second between the only 3-year-olds in the field, finishing a nose ahead of eight-time stakes winner Street Lute.

Hello Beautiful’s winning trainer Brittany Russell, just days away from a special delivery of her own (she and husband Sheldon Russell expecting their second child any day) beamed: “It’s so special, especially with her. It’s a tough game, and to have a filly like her, she just kind of keeps you up there. She gives you confidence. She shows you that you can do it. She makes you want to wake up in the morning and do it all over again on the bad days. I have a barn full of horses because of her, and many clients because of her. She’s been so good to us.”

“She’s a really nice horse. She’s just a special filly. You can do anything you want with her,” said jockey Jevian Toledo, who’s been deputizing for regular rider Sheldon Russell. “She’s got the speed, so we used her speed to our advantage because the track is pretty fast today. When I asked her, she just took off in the stretch. She just put her head in front and she wouldn’t let them go by.”

Purchased by Russell for $6,500 as a yearling out of the 2018 Fasig-Tipton Midlantic December mixed sale, Hello Beautiful finished third in her debut at Pimlico the following May, was second in the next, and made quite the impression as she broke her maiden by five and a half lengths in her third career start that July at Laurel. Her stakes debut came on Maryland Million Day, winning the Lassie by three and three-quarter lengths, and she closed out her season with an 11 3/4-length score in the Maryland Juvenile Filly Championship, going seven furlongs in 1:22.43.

Her 3-year-old season kicked off in June and, after winning an allowance at Laurel, she hit the road, finishing off the board at Ellis Park and Saratoga. When she returned to Laurel she delivered dominating back-to-back wins in the Maryland Million Distaff, which she won by 11 1/4 lengths, and Safely Kept Stakes, won by 3.

The striking blaze-faced dark bay bumped her win streak to three when she won the What a Summer Stakes in January, followed by a start in the Barbara Fritchie Stakes-G3, where she faded to fifth as the 2-5 favorite. Tackling the streaking Chub Wagon in the Shine Again Stakes in June at Pimlico she missed by a neck, but was back in the winner’s circle after a three and three-quarter-length score in the Alma North Stakes in July. She then dominated in Laurel’s Weather Vane Stakes in September, scoring by a 10 1/4 lengths.

The 4-year-old daughter of Golden Lad, owned by Madaket Stables LLC, Albert Frassetto, Mark Parkinson, K-Mac Stable and Magic City Stables LLC, has proved three is her lucky number as she is now on her second win streak. She has an overall record of 10-3-1 from 18 career starts, with $582,570 earned. She is currently the overall leader of the 2021 MATCH Series after taking the lead in the Filly and Mare Sprint–Dirt division with the Weather Vane win. The series’ final divisional race is the Willa On the Move Stakes on Dec. 26 at Laurel.

Hello Beautiful is one of three starters for her dam Hello Now, a daughter of Tiznow whose other winner is 3-year-old Hello Hot Rod (Mosler). A stakes winner this year when he captured the Jimmy Winkfield Stakes at Aqueduct in January when owned and trained by Russell, Hello Hot Rod was sold after that race for $335,000 at the Fasig-Tipton Kentucky February Mixed Sale.

Hello Now, now owned by Holly House Farm, was bred to Hoppertunity for 2022.