On a mission seeking redemption, Vivian E. Rall’s homebred Epic Idea found a spot between horses and powered down the stretch to win the $100,000 Maryland Million Ladies by a half-length over Maldives Model on Saturday, Oct. 23 at Laurel Park. 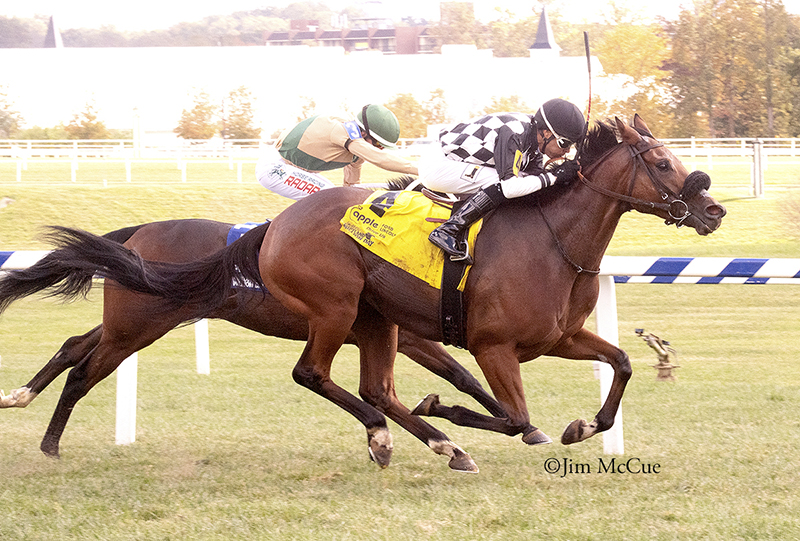 Epic Idea came into this year’s running of the Ladies as the lukewarm favorite of the 11 fillies and mares going a mile and an eighth on the turf. She crossed the line first in the 2020 running and survived a steward’s inquiry, only to be disqualified to second upon review of the Maryland Racing Commission this past May.

“It’s big redemption for us,” said trainer Michael Merryman after the race. “I have to bite my tongue a little bit right now because everyone knows that [the disqualification] was not right. But all the credit to the breeder, Vivian Rall. She’s one of the best horsemen in Maryland. Credit to my mom for bringing this horse along with us. . . just a credit to all the nice horsemen we have behind this filly.”

After battling on the lead in 2020, Epic Idea rated off the pace set by Tipsy Chatter this year through an opening quarter-mile in :23.63 and half in :47.89. Tipsy Chatter was joined by Brushing turning for home, but the pair left just enough room for Epic Idea to slip between them. Bursting clear down the stretch, she held off a late run from Maldives Model, as the steadily closing Judi Blue Eyes was another three-quarters of a length back in third. Final time over the firm turf was 1:49.46.

Trained by Merryman’s mother Ann for her first two seasons, consisting of five starts each in 2019 and 2020, Epic Idea debuted as a 3-year-old in June 2019 and broke her maiden by a length in a maiden special weight at five and a half furlongs on the turf that August in her third career start.

Last year, the daughter of Great Notion returned in June after an eight-month break to finish eighth in an allowance at Laurel before winning by a length in her next start in July. She finished out the season in the Ladies.

Her first start this year at 5 saw her tackle Pimlico’s The Very One Stakes on Preakness weekend. Going five furlongs on the turf, she ran evenly and finished eighth of 12, although only three and three-quarter lengths behind winner Caravel.

Epic Idea was winless in her five starts coming into Maryland Million Day, all turf sprints, but rallied late to get up for third in her prior start, a five and a half-furlong Laurel allowance on Sept. 30. With her first official stakes win in this year’s Ladies, she now has a record of 16-3-3-2 with $179,122 in earnings.

Epic Idea is a fourth-generation homebred (all by Maryland sires) for Rall, descending from the *Mystic II mare Aunt Sheila (born in 1970) and is the first foal out of $108,089-earner Calliope. The Outflanker mare has a winning 3-year-old full brother to Epic Idea named Great Idea, an unraced 2-year-old colt by Divining Rod named Icandothat, and produced a Super Ninety Nine colt this March.