Bird Mobberley LLC’s Buff My Boots wasn’t going to let anyone by her as she pinned her ears and charged across the wire first in the $100,000 Maryland Million Lassie, for 2-year-old fillies, to win her first stakes by a half-length on Saturday, Oct. 23 at Laurel Park. 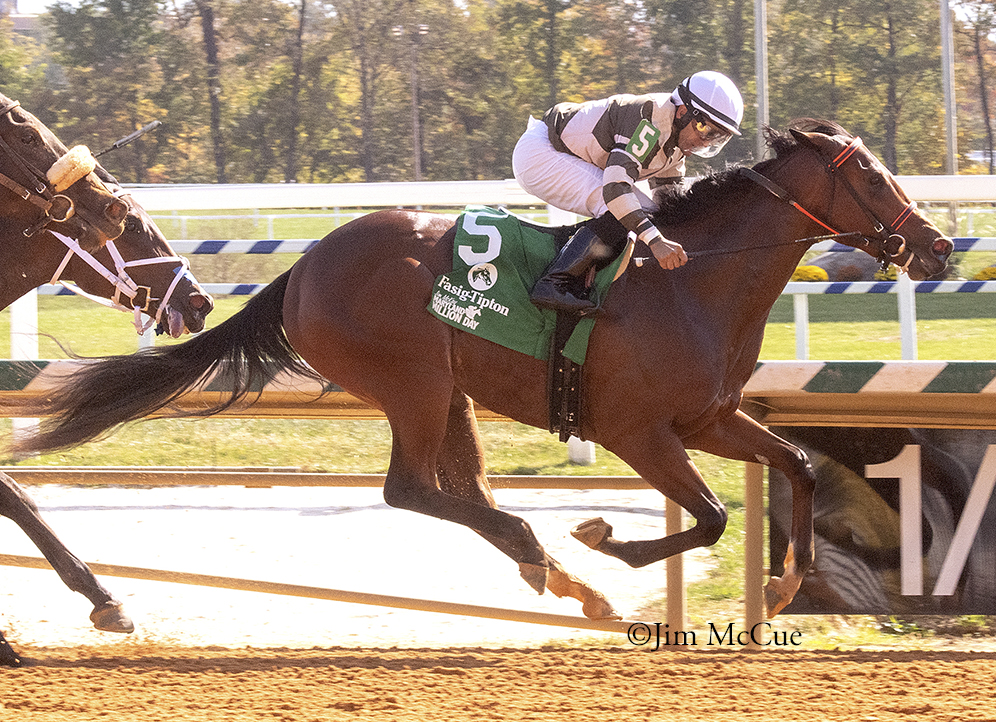 Just three weeks since her last face-off against Sparkle Sprinkle, Buff My Boots fought her way to the lead to hit the opening quarter-mile in :22.59 and continue through a half-mile in :45.63 at the top of the stretch. Sparkle Sprinkle moved up the outside of Buff My Boots as they battled head-to-head down the stretch, with Buff My Boots pulling ahead just in time to beat out a late run from My Thoughts, with Sparkle Sprinkle a half-length back in third. The daughter of the late Northview Stallion Station sire Buffum, ridden by J.D. Acosta, finished the six furlongs in 1:11.14.

“It worked out just like we talked about,” said trainer John E. Salzman Jr. “We didn’t want to kill ourselves with Sparkle Sprinkle, who’s a nice horse. We did it last week but we did it with intentions of settling it there, instead of settling it here. It worked out. Xavier took his horse back a little and still got back to us at the head of the lane, and the best horse wins maybe. They both ran big and I’m just proud for Bird and her family. They do a lot and they’re great owners.”

Purchased by Salzman for $7,000 as a yearling out of last year’s Fasig-Tipton Midlantic Eastern Fall sale, Buff My Boots won her debut this July at Pimlico by 10 1/4 lengths in a five-furlong $25,000 maiden claimer. She headed to Colonial Downs for her next start, where she finished fifth in her stakes debut in the Keswick, before winning an allowance at Timonium by three-quarters of a length in September.

With her first stakes win under her belt, Buff My Boots holds a record of 3-0-1 from five career starts with $115,998 earned.

Bred by Hope Hill Farm, she is the third winning starter from four foals of racing age for her dam Shekeepsherbootson. A daughter of Not For Love, Shekeepsherbootson produced Imagining fillies in 2020 and 2021, and was bred back to that stallion for 2022.