Corrales Racing LLC’s Air Token pulled away down the stretch to secure his first official stakes victory by two and a quarter lengths in the $100,000 Maryland Million Sprint on Saturday, Oct. 23 at Laurel Park. 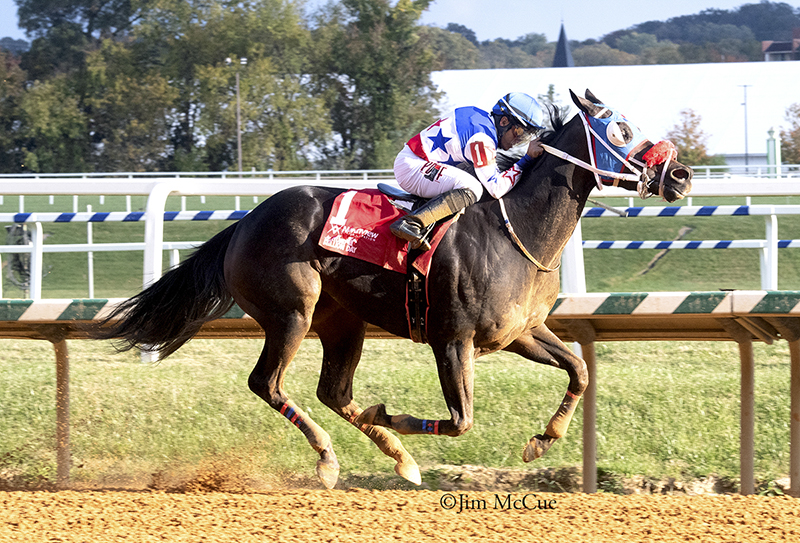 Making his fifth stakes start of the season, and first since finishing 10th in the Charles Town Classic-G2 in August, Air Token settled along the inside rail in third behind longshots Valued Notion and Whiskey and You through an opening quarter-mile in :22.25. He moved past Whiskey and You as they came around the final turn after a half in :44.99, caught and passed Valued Notion down the stretch, and was well clear of late-running favorite Double Crown to hit the wire in 1:09.63 for six furlongs. Double Crown got second by a half-length over game 35-1 pacesetter Valued Notion.

In 26 career starts, Air Token has run the six-furlong distance four times, winning three and finishing second once. “He’s always a good breaker from the gate,” said J.D. Acosta, who has ridden him in his last eight starts. “I didn’t want to put him on the lead, because he likes to chase horses. I knew there was a lot of speed and you saw how fast they went. The only thing with this horse is, when he starts to make a move he likes to lay into horses. I got beat one time at Pimlico because he was lugging in. When he switched leads I had to make sure that I kept him away from other horses. As soon as we turned for home, he was really aggressive down the stretch.”

The 4-year-old gelding secured his first official stakes victory. He crossed the wire first in last November’s Concern Stakes, but has since been disqualified due to a positive sample.

Originally campaigned by Laney Racing LLC and trainer Timothy Keefe, Air Token finished third in his only start at 2, at Laurel in May 2019. It took more than a year for him to return, and he recorded his first win in his fourth career start that August. Claimed out of that race for $10,000 by Jose Corrales, Air Token was sent out 10 more times last year, picking up three more wins. Among his 2020 placings was a second, behind Beltway Bob, in the Maryland Million Turf Starter Handicap. He concluded his year with a fourth in the Native Dancer Stakes in December behind multiple stakes winners Harpers First Ride, Forewarned and Cordmaker.

The son of Golden Lad kicked off this season with a seventh in the Jennings Stakes in January before posting back-to-back second-place finishes in starter and allowance company at Laurel and Charles Town, and finally scoring by a head in a mile and a sixteenth allowance at Pimlico. Air Token finished second in his next start, the Ben’s Cat Stakes, just two lengths behind Valued Notion, before notching another allowance win and finishing fifth in the Bert Allen Stakes, his only start on the turf this year, at Colonial Downs in July.

Bred by Carol Ann Kaye, Air Token went through the ring as a yearling at the 2018 Fasig-Tipton Midlantic Eastern Fall sale and sold for $3,500 to Lancy Racing. He is his dam Saint Dinorah’s third winning starter from four foals produced, following Midnight Cowgirl (Midnight Lute) and Quick Man (Can the Man).

Saint Dinorah, a daughter of St Averil, is a half-sister to stakes winners Baltimore Bob and Gabianna and Maryland Million Oaks winner Baltimore Belle, as well to the dam of Maryland Million winners Action Andy (2012 Sprint) and Phlash Phelps (2015, 2016 Turf).