Eclipse Thoroughbred Partners’ late-running Aloha West delivered an epic performance in getting his first stakes win in the $2,000,000 Breeders’ Cup Sprint-G1 at Del Mar on Saturday, Nov. 6. The 4-year-old son of Hard Spun surged down the stretch and caught Dr. Schivel at the wire to prevail by the slimmest of noses on the world’s biggest stage. 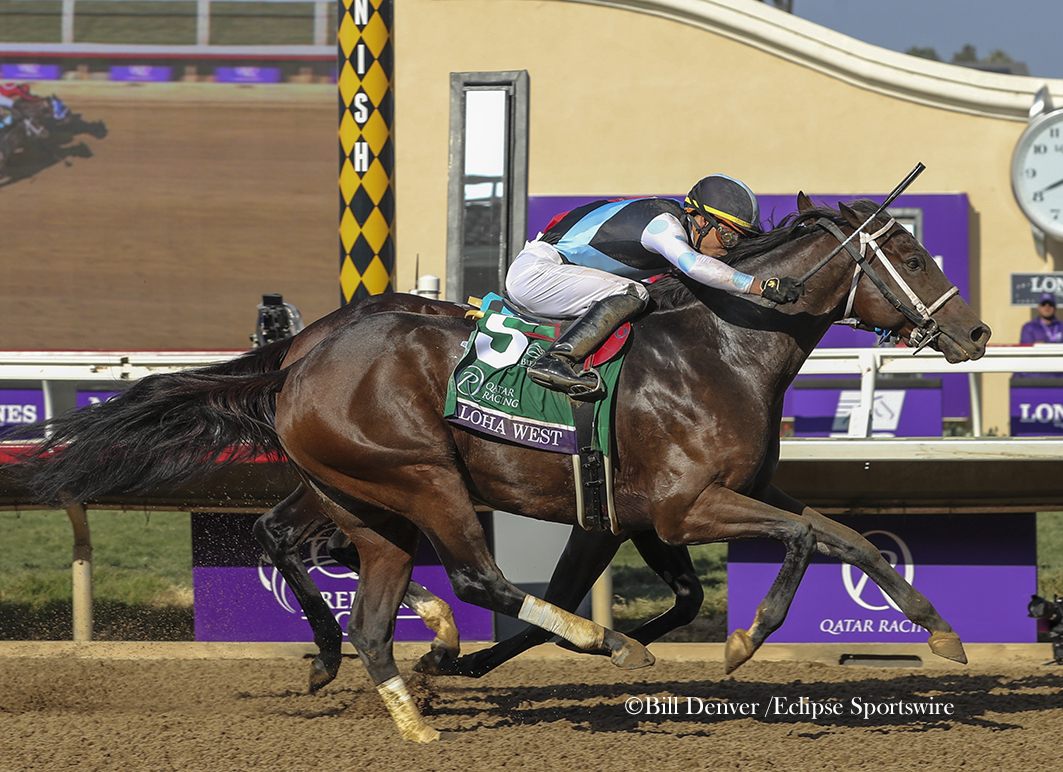 Coming in off a second-place finish in his graded stakes debut last month, the Stoll Keenon Ogden Phoenix Stakes-G2 (a Breeders’ Cup “Win and You’re In” challenge race) in which his rally fell a neck short of Special Reserve, Aloha West went off as the 11-1 fourth-choice on championship day. Getting shuffled back at the start, he remained near the back of the nine-horse field as 1-5 favorite Jackie’s Warrior led through an opening quarter-mile in :21.91. Finding a place in mid-pack just off the rail as they raced down the backstretch, jockey Joel Rosario shifted Aloha West out rounding the far turn, after a half-mile in :44.11, and began to move up turning into the stretch. Jackie’s Warrior, pushed by Special Reserve early, was fading in the final furlong as Dr. Schivel took over, but Aloha West was running fastest of all. Making up four lengths, he hit the wire for the photo in a final time of 1:08.49 for the six furlongs.

“[Trainer] Wayne [Catalano] just did an amazing job developing this colt,” said Aron Wellman, founder and president of the Eclipse Thoroughbred Partners. “He only raced for the first time in February of this year when he was 4 years old, and (nine) months later he is the Breeders’ Cup Sprint champion. That requires mastery of horsemanship to be able to achieve something so monumental.”

Bred by Robert T. Manfuso and Katharine M. Voss, Aloha West was sold as a yearling at the 2018 Keeneland September sale for $160,000 to agent Ben Glass. He launched his career for owners Gary and Mary West over a muddy sealed Oaklawn Park this past February, a six-furlong maiden special weight which he won by three-quarters of a length over eventual graded stakes-winning sprinter Mighty Mischief.

Aloha West’s next three starts were in allowance company over the next three months. After a fifth-place finish in March at Oaklawn going six furlongs, in which he was pinched back dramatically at the start, spotting the field a couple of lengths, Eclipse purchased the colt privately and left him with Catalano. Next out for his new owners he charged home to finish second by a nose going six and a half furlongs at Keeneland in April. Six weeks later, Aloha West won by five at Churchill Downs, completing seven furlongs in 1:21.84.

Continuing up the ladder, he made his stakes debut in June in Churchill Downs’ Kelly’s Landing Overnight Stakes and finished fourth after another eventful trip, but ahead of stakes winners Art Collector, Bourbon Calling, Long Range Toddy and Relentless Dancer. Back-to-back allowance victories at Saratoga followed: in August, he won by a nose, getting six furlongs in 1:09.77; in September, he won by two and three-quarter lengths in a final time of 1:21.63 for seven furlongs.

Aloha West is the newest Maryland-bred millionaire, having earned $1,311,068 from nine starts this year. He became the sixth Maryland-bred to win a Breeders’ Cup race, and the second to take the Sprint, joining 1990 winner Safely Kept. Other Breeders’ Cup champions are Classic and Dirt Mile winner Knicks Go, Classic winners Cigar (1995) and Concern (1994), and Juvenile Fillies Turf winner Sharing (2019).

Aloha West is one of four winners from five starters for Island Bound, a Grade 2-winning daughter of Speightstown campaigned by Manfuso and trained at the end of her career by Voss. Island Bound’s other runner this year is undefeated 3-year-old filly Moquist (by Nyquist), who won for the fourth time at Laurel Park on Oct. 29 for owner Mopo Racing and trainer Dale Capuano, who purchased her for $50,000 at the Fasig-Tipton Midlantic yearling sale. Island Bound’s Good Samaritan yearling filly was a $47,000 RNA at this year’s Fasig-Tipton Midlantic sale and is still owned by Voss. After delivering a Divining Rod filly in April, the mare is now in foal to Golden Lad.