Korea Racing Authority’s Knicks Go faced his toughest challenge to date heading into the $6,000,000 Breeders’ Cup Classic-G1, as he prepared to stretch out for the first time at the mile and a quarter distance while taking on seven of the country’s best distance horses. But the mounting pressure of the test ahead never seemed to phase the Brad Cox trainee as the speedy gray led gate-to-wire to clinch victory by two and three-quarter lengths over Kentucky Derby-G1 winner Medina Spirit on Saturday, Nov. 6 at Del Mar. In doing so, he became the third Maryland-bred in history to win the Breeders’ Cup Classic, joining back-to-back winners Concern and Cigar in 1994 and 1995. 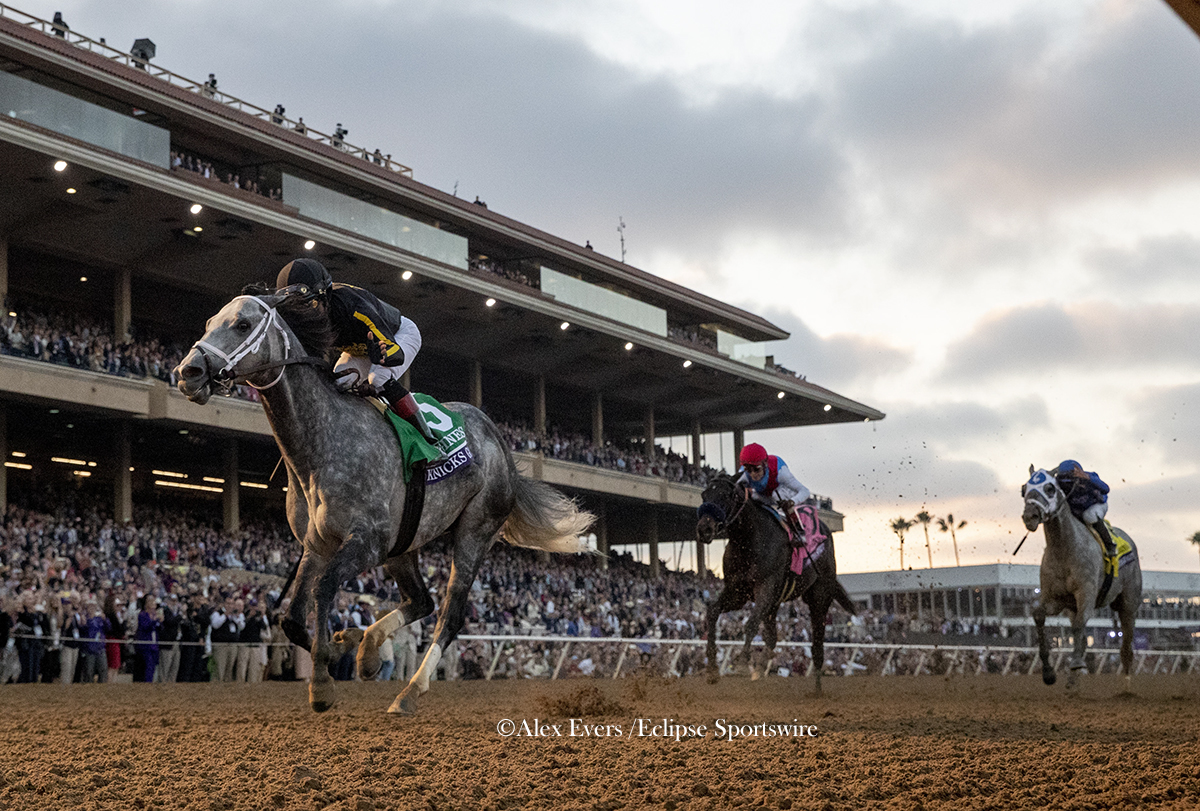 Sent off as the 3-1 second choice, Knicks Go brushed with his stablemate – Belmont Stakes-G1 winner and 2-1 Classic favorite Essential Quality – out of the gate then sprinted to a clear lead under Joel Rosario while saving ground along the rail through fractions of :23.16, :45.77 and 1:10.04. Around the far turn, with Art Collector pressing from behind, Medina Spirit coming up the outside and Hot Rod Charlie going to the inside, Knicks Go drifted out to the four-path and accelerated for home. Fending off all challengers he crossed the line in 1:59.57, a few ticks off the 1:59.11 track record set by Candy Ride (Arg) in August 2003.

“He ran a tremendous race,” said Cox. “Obviously, the race went really well. He broke, was able to establish position early. Once he was able to do that, he’s a hard horse to catch. I’m very proud of him.”

The 5-year-old son of Paynter became only the sixth horse to win two different Breeders’ Cup races (having taken the Dirt Mile in 2020). Notching his fourth straight victory, and fifth graded stakes of the year in seven starts (three Grade 1) Knicks Go silenced any Horse of the Year debate as he has almost certainly solidified his bid for the honor.

“The track was so fast, I just knew if he broke well it was going to work in his favor. I mean it was his biggest test yet and he obviously passed it with flying colors, it was insane. It was certainly surreal, but I didn’t doubt him, I kind of knew in my gut it would be alright,” said Sabrina Moore. “It’s really wild. I just am so lucky. Being in Maryland, the next best thing you can do, especially to get a kickback for the breeders, is to be in the Breeders’ Cup and for it to work out not just once, but three times, it’s just unreal.”

History was made on Breeders’ Cup Saturday as Knicks Go’s Classic victory and Eclipse Thoroughbred Partners’ Aloha West’s electrifying score in the $2,000,000 Sprint-G1 signified the first time two Maryland-breds won on the same Breeders’ Cup card. Aloha West, a 4-year-old son of Hard Spun out of Island Bound, was bred by Katharine Voss and the late Robert T. Manfuso.

In three trips to the Breeders’ Cup, Knicks Go has two wins and a second. In 2018, after upsetting the Breeders’ Futurity-G1 by five and a half lengths at 70-1, he earned an automatic berth into the Breeders’ Cup Juvenile-G1 at Churchill Downs and led into deep stretch until passed by favorite Game Winner. In last year’s Breeders’ Cup Dirt Mile-G1 at Keeneland he led gate-to-wire while setting a track record 1:33.85.

Kicking off his 2021 season in the $3 million Pegasus World Cup Invitational-G1, which he won as the favorite by two and three-quarter lengths in January at Gulfstream Park, Knicks Go recorded additional stakes victories in the Prairie Meadows Cornhusker Handicap-G3 (by 10 1/4 lengths in July); Saratoga’s Whitney-G1 (by four and a half lengths over Maxfield in August); and the Lukas Classic-G3 (by four lengths in October) at Churchill Downs – all at a mile and an eighth.

Bred by Sabrina Moore and Angie Moore, Knicks Go was consigned as a weanling to the 2016 Keeneland November sale and sold for $40,000 to Northface Bloodstock. The following September, he returned to Keeneland for the September yearling sale and purchased by the Korea Racing Authority for $87,000.

Knicks Go started his career with trainer Ben Colebrook at Ellis Park with a debut win on July 4, 2018. He was transferred to the Cox barn in early 2020 after a winless 3-year-old season (his best finish in eight starts that year was a second in the Ellis Park Derby). Since moving to Cox’s string, he has won eight of 10 starts and earned $7,932,580 (an average per start of $793,258).

Knicks Go is one of six Maryland-breds produced by Kosmo’s Buddy, a stakes-winning Maryland-bred daughter of Outflanker out of the stakes-placed Allen’s Prospect mare Vaulted. The dam of four winners from five starters, Kosmo’s Buddy was a $195,000 RNA while not in foal at the 2018 Fasig-Tipton Kentucky fall mixed sale before being purchased by Park for a client. She was later sold to Sallusto and Albina for Newnanner Stud Farm in Versailles, Ky., where she now resides. Her most recent foals are fillies by Justify (2020) and Ghostzapper (2021), and she was bred to Uncle Mo for 2022.

The Moores still own Knicks Go’s half-sister Pinkprint (by Not For Love), and sold her yearling Tiznow filly on Oct. 4 at the Fasig-Tipton Midlantic Fall sale for $150,000.