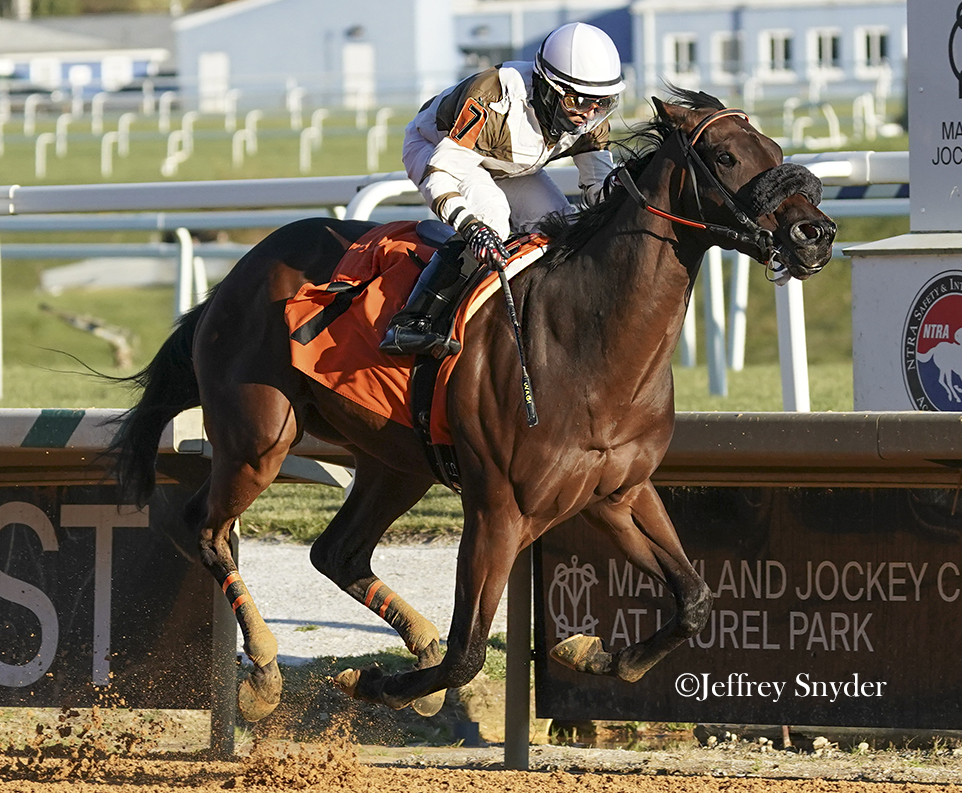 Coming in off a third-place finish as one of the favorites in the Maryland Million Nursery, Local Motive headed straight to the front in the Lewis before settling into third on the outside, just behind early leader Amidships and Tops the Chart. As they hit the opening quarter-mile in :21.98, Local Motive moved his way up alongside Tops the Chart, with the pair coming around the final turn two-wide before Local Motive took over through a half-mile in :45.26. Digging in down the stretch, he was passed briefly by Beast Or Famine, who was making his move down the center of the track and started to drift out. The battle was on, and Local Motive kept finding more. He held off Beast Or Famine to win by head, completing the six furlongs in 1:10.16. No Sabe Nada was three lengths back in third.

“I was a little worried. I thought that [Beast Or Famine] got by him. It’s hard to tell when they’re that far apart in the middle of the racetrack. I wasn’t coming to the winner’s circle until I was sure,” said trainer John Salzman Jr. “I think he’s getting better with every race. I was a little scared after he got hit in the eye at Timonium that he didn’t like the dirt. Today we decided that we’d just take back a little bit and see if he’d finish a little stronger. He ran a big race today.”

Breeders Wasabi Ventures Stables LLC and Greenspring Mares LLC purchased Wild for Love, with Local Motive in utero, privately from Bowmans and Higgins Stable, who stayed on as a co-breeder. The son of Country Life Farm freshman sire Divining Rod was born March 10, 2019 at GreenMount Farm and purchased privately as a weanling by Salzman, for Mobberley.

The 2-year-old broke his maiden on debut in the first race at Pimlico July 24, winning the six-furlong waiver maiden by four and a quarter lengths. Just over two weeks later, he became his sire’s first stakes winner with a half-length score over Roll Dem Bones in the Hickory Tree on the Colonial Downs turf, finishing the five furlongs in :57.72.

The odds-on favorite when he returned to Maryland for the Timonium Juvenile at the end of August, he was pulled up on the backstretch and vanned off after being struck in the eye by dirt. Recovering quickly, Local Motive took another trip out of town in late September and finished in a three-way photo for third, winding up fifth, in the Smoke Glacken Stakes at six furlongs at Monmouth Park. Next out, on Maryland Million Day on Oct. 23 at Laurel, he was third, two and a quarter lengths behind winner Buff Hello in the Nursery.

Salzman noted the $100,000 Maryland Juvenile for Maryland-bred/sired 2-year-olds, at seven furlongs Dec. 4 at Laurel, could be the next stop for Local Motive. He is currently the richest Maryland-bred juvenile of 2021, winning three times and finishing third once in six starts while earning $161,160.

“He’s a nice horse. He was showing some ability. I wasn’t quite sure he was a stake horse, but I knew he had some ability,” Salzman said. “I think he might go on, especially the way he rated a little bit today. The next race is a Maryland-bred race and might not be quite as tough, but it’s seven-eighths so we might get a better feel for it then.”

Local Motive is the third winner from three starters for his dam Wild for Love, a winning daughter of Not For Love who captured the 2015 Maryland Million Distaff Starter Handicap. Her weanling filly by Maximus Mischief sold for $60,000 at this year’s Keeneland November sale.

Wild for Love has been bred to Lord Nelson for 2022.