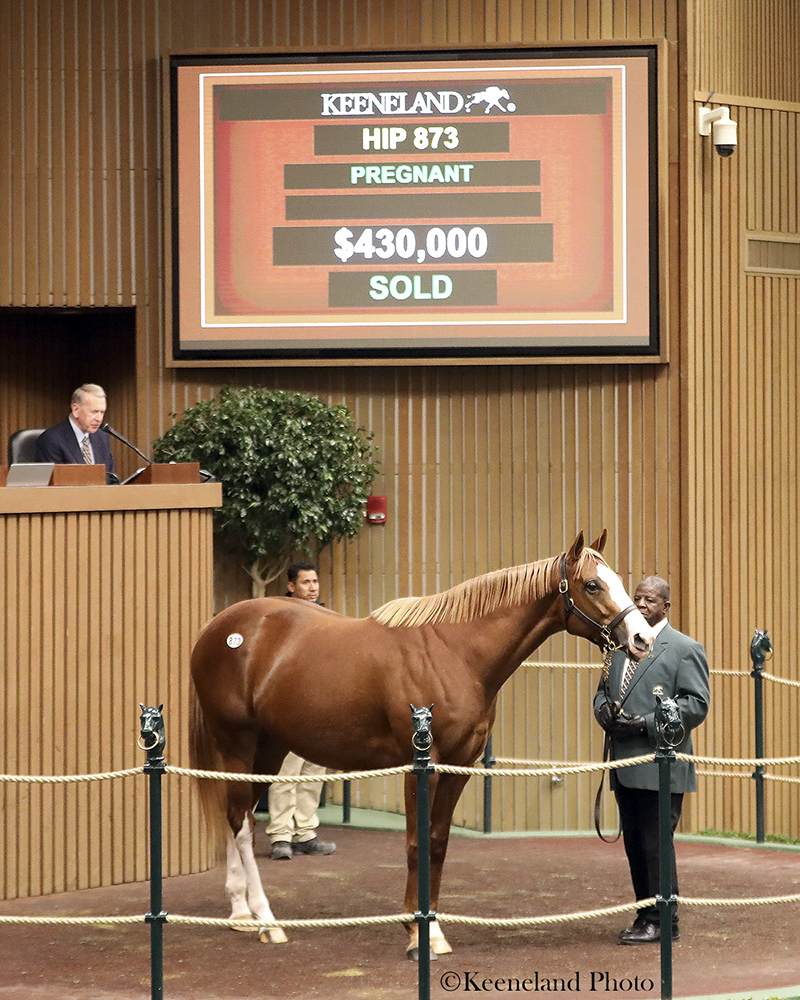 Gale, bred to Not This Time and carrying her first foal, sold for $430,000 and was purchased by Andrew N. Warren, from the consignment of Gainesway, Agent XXXV. The 4-year-old daughter of Tonalist out of the stakes-winning Stormy Atlantic mare Windy Forecast made five career starts, retiring with a record of 3-1-0 that included a two and three-quarters lengths score in the Geisha Stakes this past January.

The filly was originally sent through the auction ring as a weanling, where she was purchased for $175,000 by SpringHouse Farm at the 2017 Fasig-Tipton Kentucky Mixed sale, and sold the following August to Quarter Pole Enterprises for $200,000 at the Fasig-Tipton Saratoga Select sale. As a 2-year-old her price tag only increased as Bridlewood Farm and Eclipse Thoroughbreds went to $450,000 for her at the Fasig-Tipton Florida Select 2-Year-Olds in Training sale.

Via Veritas, consigned by Hunter Valley Farm, agent, and in foal to No Nay Never, sold for $275,000 to Magna Carta Bloodstock. Bred by Maryland Mare Venture LLC, the 4-year-old daughter of Street Sense made three starts in the UK as a 2-year-old and 3-year-old. Via Veritas is the eighth foal out of Win McCool, a Grade 3-winning daughter of Giant's Causeway, and a half-sister to multiple graded stakes-placed Cool Beans and to the dam of Arkansas Derby-G1 winner Magnum Moon.

I'm Betty G, in foal to Improbable, was purchased for $275,000 by Stoneriggs Farm out of the Bluewater Sales consignment. Bred by Carol Kaye and Boyce Stable, the 7-year-old daughter of Into Mischief out of Lady in Ermine (Honour and Glory) sold for $150,000 as a 2-year-old to Three Diamonds Farm and made 19 career starts, retiring as a multiple stakes winner with a record of 5-2-5 that included placings in three graded stakes. The Maryland-bred champion older female and turf runner of 2018, she had her first foal last year, an Uncle Mo filly, and foaled a filly by Constitution this March.

Mulholland Springs LLC purchased multiple stakes-winning maiden mare Limited View, in foal to Maclean's Music, for $230,000 from Scott Mallory's consignment. Bred by Barbara G. Smith, the 6-year-old daughter of Freedom Child out of Loves to Glance (Not For Love) retired last October with a record of 25-9-1-1.

Sagamore-bred Whispering Pines, a 4-year-old daughter of Uncle Mo out of stakes winner and graded stakes-placed Walkwithapurpose, and Quiet Company, a 5-year-old daughter of Temple City out of Clarendon Fancy, sold as racing or broodmare prospects, with Whispering Pines selling for $185,000 to Olivia Perkins-Mackey and Quiet Company selling for $175,000 to Ocala Stud.

Bred by 2500 Determined Stud, the Nyquist colt is the first foal out of Tough Irma, a stakes-placed daughter of Stormy Atlantic. The Constitution colt, bred by Dr. and Mrs. A. Leonard Pineau, is the 12th foal out of the Kissin Kris mare Wood Not, who is also the dam of Grade 3 winner and Grade 1 producer Purely Hot and stakes-placed Steamy Hot.

Sold for $100,000, Holiday Blues, in foal to American Pharoah, was consigned by Eaton Sales, agent and purchased by Four Pillars Holdings LLC. Bred by Marathon Farms Inc., the 8-year-old daughter of Ghostzapper out of Deputy Cure Blues (War Deputy) retired with a record of 15-3-1-3. Her first two foals are by Speightstown and Street Sense.