Making her stakes debut, Eric A. Rizer’s Princess Kokachin shot to the front and never looked back in the $75,000 Politely, for Maryland-bred/Maryland-sired fillies and mares (3 & up), at Laurel Park on Friday, Nov. 26. 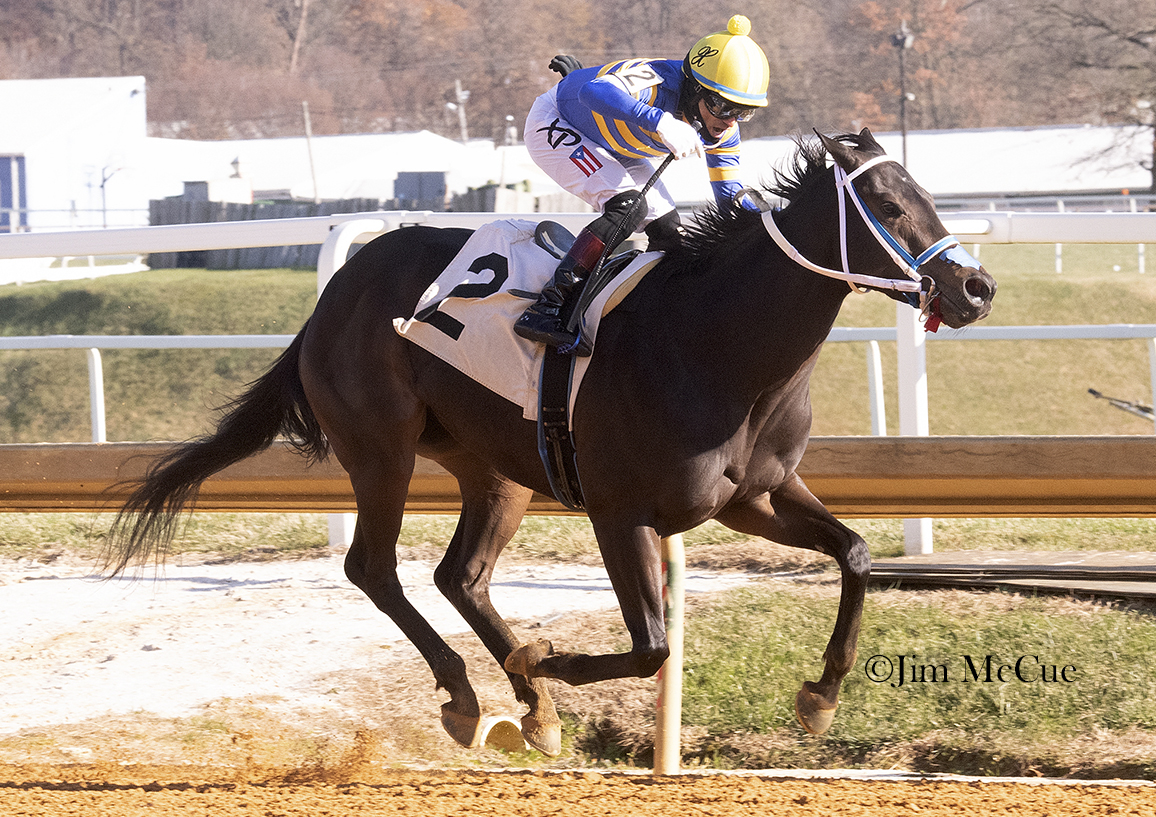 Coming in off of four straight wins at Laurel, Princess Kokachin was urged on from the start, taking it to frontrunning favorite Hello Beautiful, who dropped back to fourth as Never Enough Time and Paisley Singing moved up through an opening quarter-mile in :21.98. Though they tried, no one could catch Princess Kokachin as she hit the half in :45.12 and turned for home, opening up and crossing the wire five and a half lengths ahead of Never Enough Time. Paisley Singing was third, two and a quarter lengths back, with Whereshetoldmetogo’s half-sister Miss Chesapeake finishing fourth as she edged out stablemate Hello Beautiful, who was last in the field of five. Final time for the six furlongs was 1:11.22.

“I just told Xavier to ride her the same way he always does. Don’t worry about who’s in the race, just ride your race, and it worked out good,” trainer Jerry Robb said. “[Hello Beautiful] couldn’t keep up with us, and the one post is not good if you can’t keep up. It worked out perfect.”

A 3-year-old daughter of Graydar, Princess Kokachin finished second in her debut last December, her only start as a 2-year-old, before returning this May to win by an impressive 12 1/2 lengths in a four and a half-furlong maiden special weight at Charles Town. She moved on to Pimlico two weeks later, finishing second (by a length) in her first allowance start, and has been a frequent name in the entries ever since, making 11 starts in seven months.

Her second career win came at Pimlico in August going five furlongs in an off-the-turf starter race. After a fourth-place finish at Timonium early September, she kicked off her win streak at Laurel in a six-furlong starter race by six and three-quarters lengths in a final time of 1:10.77. She secured back-to-back allowance scores in October, the first going five and a half furlongs and the next at six furlongs, and then dominated a mid-November allowance by five and a quarter lengths.

Bred by Nancy M. Rizer and Eric A. Rizer, Princess Kokachin is the third foal out of Serenity Hill, a winning daughter of Speightstown whose three starters (all winners) from four foals include stakes-placed 2-year-old Sparkle Sprinkle (Holy Boss). Serenity Hill was bred to Golden Lad for 2022.