Brittany Russell trainee Whereshetoldmetogo has traveled all over, but there’s no place like home when it comes to his success as he picked up his sixth stakes win at Laurel Park in the $75,000 Howard and Sondra Bender Memorial Stakes, for Maryland-bred/Maryland-sired (3 & up), on Friday, Nov. 26. 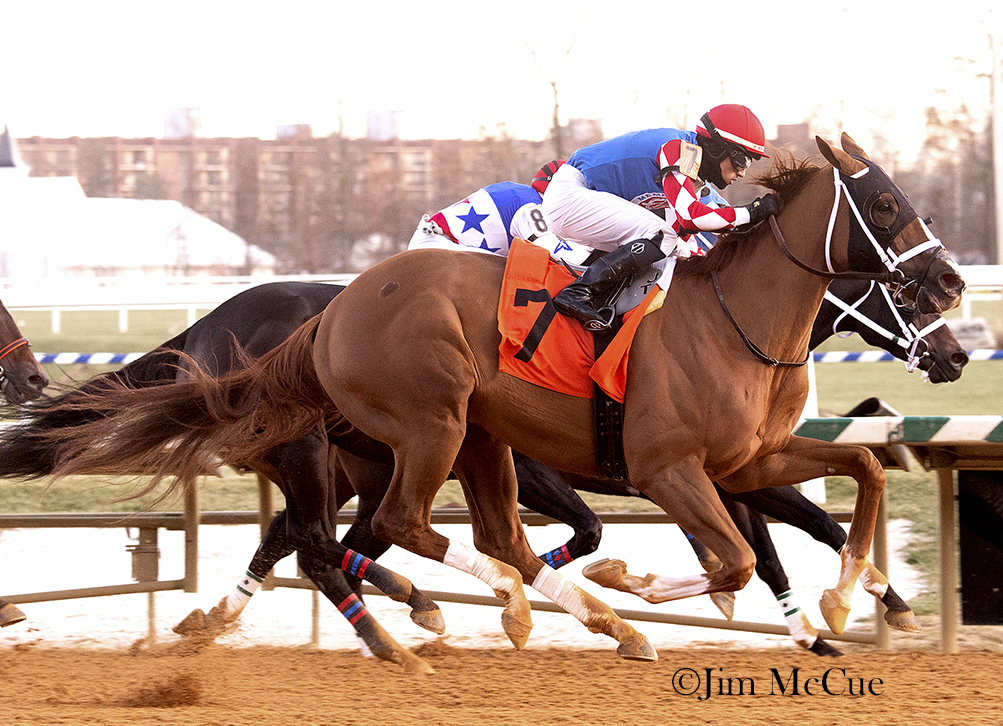 “He relaxed really good in the beginning and I knew I had a ton of horse. Sometimes he switches leads and sometimes he doesn’t, but today he switched leads and as soon as he did that I said, ‘It’s over.’ He gave all 100 percent,” jockey Jevian Toledo said.

The 6-year-old gelded son of El Padrino, owned by Madaket Stables LLC, Ten Strike Racing, Michael E. Kisber and BTR Racing Inc., secured his fourth stakes victory of the season and 10th overall as he improved his career record to 13-5-3 from 31 career starts with $744,791 earned.

The striking chestnut kicked the season off with a two and a half-length win in the Not For Love Stakes at Laurel this March. He added two stakes wins at Delaware Park when taking the Alapocas Stakes by four lengths in July, and the New Castle by a neck. He also finished third in the Challedon Stakes at Pimlico in July.

It was after the Star de Naskra that Esposito sold a majority interest to a group led by Madaket Stables, which included Ten Strike Racing and Michael E. Kisber. In his first start for his new connections, he became graded stakes-placed when second after his notorious stretch run in Parx Racing’s Gallant Bob Stakes-G3 in 2018, where he tried to savage Firenze Fire and was beaten a neck.

Transferred to the barn of trainer Brad Cox in 2019, he made four starts, with his best runs an allowance victory at Churchill Downs and a third-place finish in the Thanksgiving Classic Stakes at Fair Grounds that November. After an eight-month hiatus, Whereshetoldmetogo returned in July 2020 to finish third in the Iowa Sprint Stakes at Prairie Meadows. Transferred from Cox to Russell, he finished out the year with back-to-back victories in the Frank Y. Whiteley Stakes and Dave’s Friend Stakes.

Bred by David H. Wade, Whereshetoldmetogo is one of seven winners from eight starters for his dam Undisputed Legend, a daughter of Domestic Dispute who is also the dam of stakes-placed Castlewood Terrace. The mare delivered a Mendelssohn colt in February and was bred back to Vekoma for 2022.