Deborah Greene and Hamilton Smith’s Luna Belle has only gotten better, which she proved with a tremendous run to win the $100,000 Maryland Juvenile Fillies Championship, for Maryland-bred/Maryland-sired 2-year-old fillies, at Laurel Park on Saturday, Dec. 18. 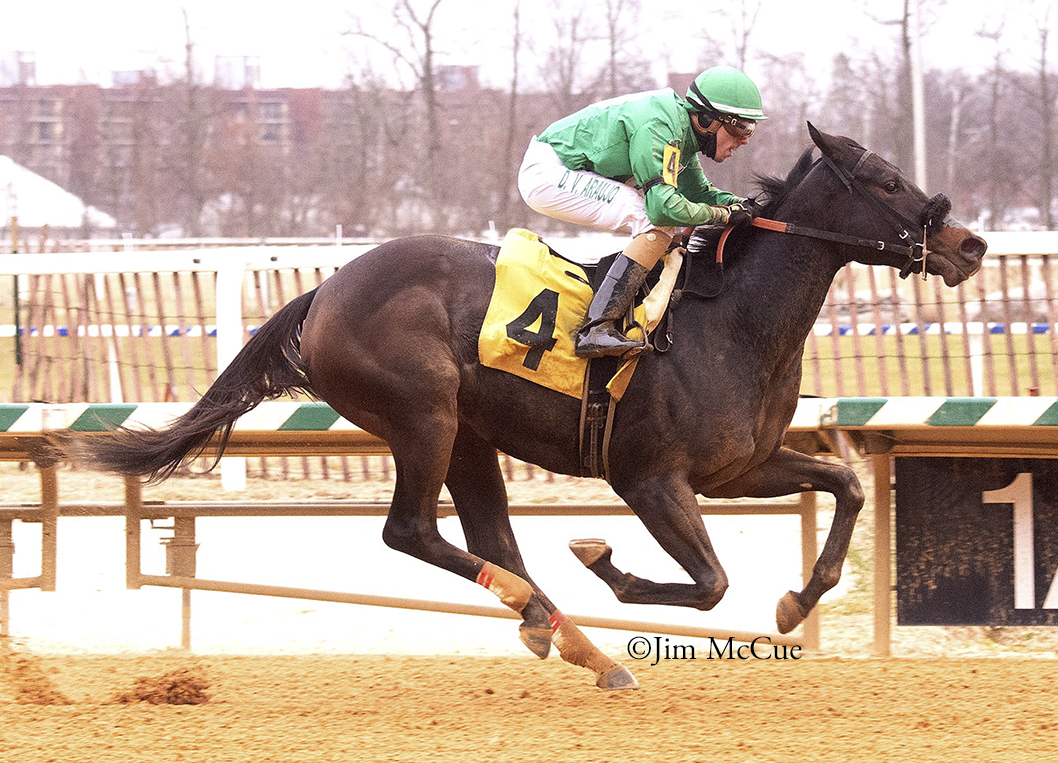 Making her third stakes start this year, Luna Belle trailed the seven-horse field as 7-10 favorite Jester Calls Nojoy rushed to the early lead over longshot Preparefortakeoff through a quarter-mile in :23.81. Jockey Denis Araujo worked hard to hold Luna Belle as they made their way around the far turn, with the pair moving up the outside to catch Jester Calls Nojoy as they turned for home. Luna Belle chased the favorite down the stretch, caught her and pulled to win by two and three-quarter lengths, with Sweet Gracie six lengths back in third. Final time for the seven furlongs was 1:25.31.

“She had two races there where she had a little bit of trouble,” co-owner/breeder and trainer Smith said. “I think we ran the best horse in the Maryland [Million Lassie], but she ran into trouble and got beat. But that’s part of racing. Everything went her way today and she showed what she’s worth. She’s a real smart filly. I thought she was third good and I think the further she goes, the better she’ll be.”

Luna Belle is the ninth stakes winner for Great Notion in 2021, and his third from his current crop of 2-year-olds. The filly made her first three starts at Colonial Downs, finishing seventh of 14 in her debut mid-July before picking up a third in early August. She finally broke her maiden in her third start, winning by six lengths as she finished the six-furlong maiden special weight in 1:09.89.

She made her first allowance start in September at Laurel, finishing third to Sparkle Sprinkle and Sweet Gracie, before making her stakes debut in the Maryland Million Lassie a month later. She finished fourth, a length behind winner Buff My Boots, as My Thoughts took second and Sparkle Sprinkle was a head in front of Luna Belle for third.

In November, Luna Belle displayed an impressive level of tenacity in the Smart Halo Stakes against open runners, biding time near the back of the pack, about a dozen lengths off the pace, before sweeping around around the final turn and charging down the stretch to finish second, three and a quarter lengths behind winner Buy the Best.

Bred by the late Fred Greene Jr., his daughter Deborah and Smith, Luna Belle is the fourth winner of five starters for her dam Heavenly Moon, Fred Greene’s homebred daughter of Mojave Moon who was produced seven foals. Luna Belle is her dam’s first stakes winner and a half-sister to stakes-placed Moon Virginia (Jump Start), The Poser (Bandbox) and Chinquapin (Orientate).