Hillwood Stable’s Cordmaker made the final start of his 6-year-old season count as he stormed his way down the center of the track to win the inaugural running of the $100,000 Robert T. Manfuso Stakes, for 3-year-olds and up, by three and a half lengths over Workin On a Dream at Laurel Park on Saturday, Dec. 26. 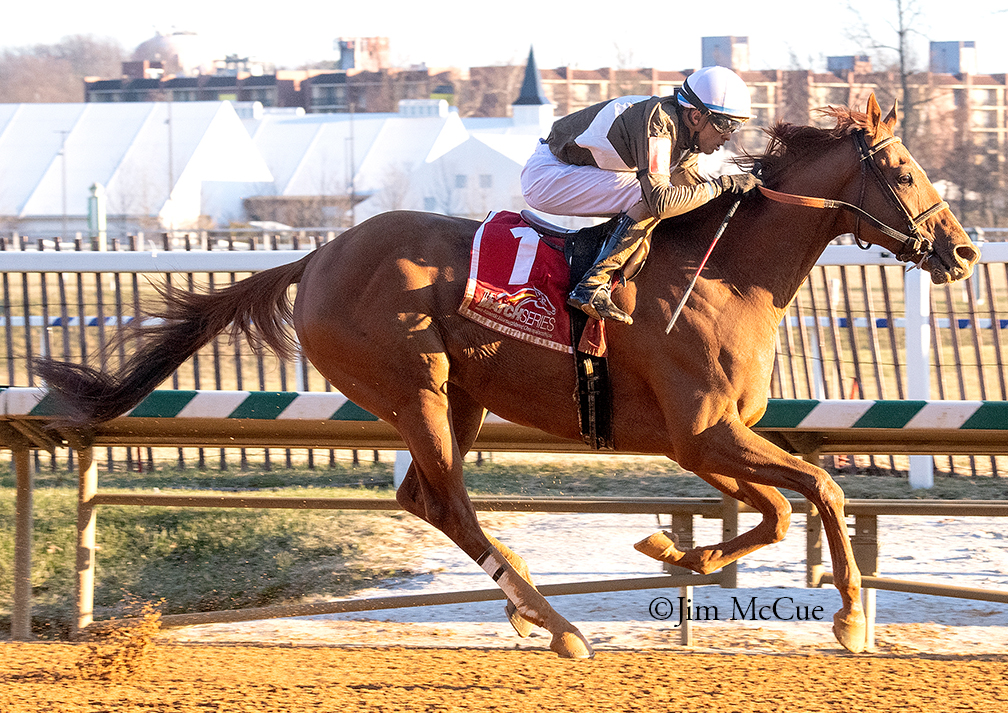 Making his ninth stakes start of the year, and sixth at Laurel, Cordmaker broke from the inside post and settled along the rail in fourth, just behind Shackqueenking, as Alwaysmining raced ahead of Workin On a Dream through an opening quarter-mile in :23.47 and half in :47.38. As they made their way around the far turn, the rest of the field began to close ranks, with Shackqueenking moving up to catch and pass Workin On a Dream as Alwaysmining faded back and Cordmaker pursued the leaders in third. Moving to the outside as they turned for home, Cordmaker swept easily down the center of the track, passing Workin On a Dream and Shackqueenking to cross the wire first, finishing the one and one-sixteenth miles in 1:44.22.

“Naturally he drew the one hole of all days, but he figured it out,” trainer Rodney Jenkins said. “He got around that turn and saved some ground there, and then when they straightened out and Victor asked him, I think he won as easy as he’s won any race in his life.”

The win was a memorable one for all of his connections, as the gelding honored the memory of the late Manfuso, who bred Cordmaker with his partner Katharine M. Voss out of their stakes-producing mare Tanca, a daughter of Polish Numbers.

“It’s all so special,” said Ellen Charles, who owns Hillwood Stable. “Bob (Manfuso) was always my friend. I think Cordmaker is my best horse, an amazing horse who is a great character in the barn. He knows he’s special, and he has given us wonderful, wonderful wins. It’s just great to be a part of this.”

Cordmaker sealed the overall title in the 2021 Mid-Atlantic Thoroughbred Championships (MATCH Series), after being the only horse to have had competed in all six races in his division (3-Year-Olds and Up Long-Dirt) this year and winning three of them, including the Manfuso, Richard W. Small and Victory Gallop. He ended the year with 49 points in his division, the most of any horse in the 2021 series.

“Cordmaker is very special,” said jockey Victor Carrasco, who has ridden Cordmaker in all of his starts this year and some before that. “We had a good trip right off the speed, and once we turned for home and he got some daylight, he was gone. It’s awesome. He’s a good horse and I think it’s even better when you have a home-track horse winning the series. I’m just happy for Mrs. Charles, Mr. Jenkins, assistant trainer Eveline (Kjelstrup) and the whole crew in the barn.”

He kicked off his 6-year-old season with back-to-back third-place finishes in the Jennings Stakes and John B. Campbell Stakes, in January and February, followed by a length score over Galerio in the Harrison E. Johnson Memorial Stakes in March, where he ran the one and one-eighth miles in 1:49.37. After a break in April, he returned to finish fourth in the Pimlico Special-G3 and later finished third in the Deputed Testamony Stakes, before making a trip to Colonial Downs for the Victory Gallop, which he won by two and a quarter lengths.

Returning to Laurel for the Polynesian Stakes, the gelded son of Curlin had originally finished second behind Captain Bombtastic before he was disqualified and placed sixth, following a stewards’ inquiry and objection by the rider of Alwaysmining, who had initially finished last in the field of six. But his next start more than made up for it, as he won the Richard W. Small by one and three-quarter lengths over Workin On a Dream, with Shackqueenking third, while finishing the one and one-eighth miles in a final time of 1:50.48.

From 34 starts made over five seasons, the gelded son of Curlin has improved his overall record to 12 wins, four seconds and seven thirds while closing in on $800,000 in earnings thanks to his most recent win, with his bankroll now sitting at $794,640.

A winner at 2, Cordmaker took the Jennings Stakes at 3, and was Maryland-bred champion older male at 4 after picking up wins in the Harrison E. Johnson Memorial Stakes, Polynesian Stakes and DTHA Governors Day Handicap, along with a third in the Pimlico Special-G3. He returned in 2020 after a nine-month break and proceeded to make eight starts in six months. Though he didn’t make any trips to the winner’s circle, he was second in the Deputed Testamony and Richard W. Small Stakes and third in the Pimlico Special-G3 and Native Dancer, the latter his final start of the year.

Cordmaker was purchased by Ellen Charles’ Hillwood Stable as a yearling for $150,000 out of the 2016 Fasig-Tipton Midlantic Eastern fall sale. The seventh foal out of Tanca, he is her third stakes winner, along with Corvus (Dance With Ravens) and 2019 Maryland-bred champion 3-year-old filly Las Setas (Seville-Ger). Tanca is the dam of seven starters, all winners, from nine named foals of racing age. Her 2019 colt by Street Sense, a $240,000 Fasig-Tipton Midlantic fall sales yearling, isn’t named; she has a 2-year-old colt by Madefromlucky who failed to reach his reserve as a yearling at the Fasig-Tipton Midlantic fall sale. Last March, Tanca delivered a filly by Honor Code, and is expecting a foal by Vino Rosso this year.