Miss J McKay proved she was a force to be reckoned with as she avoided trouble at the top of the stretch and swept to command in the $100,000 Abundantia Stakes, for fillies and mares, 3 & up, to win by one and a half lengths over Drapes at Gulfstream Park on Friday, Dec. 31. 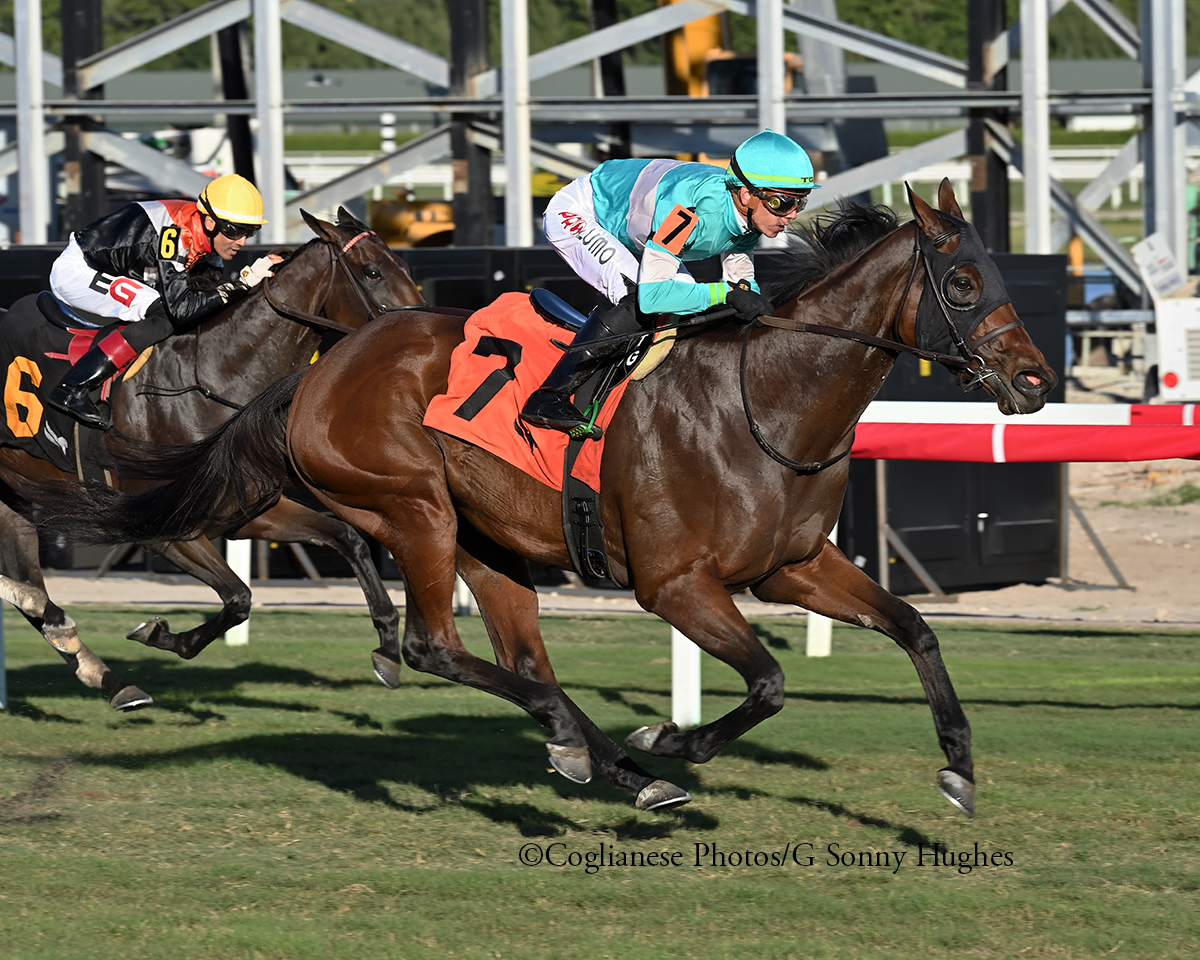 Sent off at 3-1 in her first stakes start since Oct. 2020, Miss J McKay was quick to find her place mid-pack, sitting in sixth behind Ambassador Luna, as early leader Cat’s Astray set the pace ahead of Beautiful Grace through an opening quarter-mile in :23.20. Moving between horses as they rounded the final turn, Miss J McKay swung wide around favorite Miss Auramet and powered down the center of the track, surging ahead of a late run from Drapes up the inside to hit the wire in :55.86 for the five furlongs on the turf.

“The filly broke well and the speed went on. It set up exactly as we thought it would. She settled nicely and coming into the stretch I was able to follow Luis out. Once she got clear run, she kicked it in nicely,” jockey Tyler Gaffalione said. “We got fanned out a little bit, but she was much the best today.”

The 5-year-old daughter of Hangover Kid improved her overall record to 4-4-2 from 12 career starts, boosting her earnings to $315,473.

Bred by Linda Oliff Rohleder, Miss J McKay sold for $1,500 as a weanling to D R Investments out of the 2017 Fasig-Tipton Midlantic December Mixed Sale and was later pinhooked to the 2018 Fasig-Tipton Midlantic Eastern Fall Yearling Sale, where she made a substantial return on investment when Maxis Stable purchased her for $55,000. In 2019, she was an $85,000 RNA at the Ocala Breeders’ Sale’s Spring Sale of Two-Year-Olds in Training.

Originally campaigned by Maxis and trainer Cal Lynch, Miss J McKay impressed in her career debut as a 2-year-old, where she scored by five and a quarter lengths going five and a half furlongs on the main track at Laurel Park in July 2019, becoming her sire's first winner. She made her stakes debut in her next start, where she was disqualified from first to third after bumping rivals at the eighth pole in the Colleen at Monmouth Park. But she was quick to redeem herself with a five-length win in the Anne Arundel County Stakes, her first stakes victory, for owners Maxis, Madaket Stables LLC and Wonder Stables.

Miss J McKay closed out her 2-year-old season with back-to-back second-place finishes in the Stewart Manor Stakes at Aqueduct, just a half-length behind winner Fly So Pretty, and the Maryland Juvenile Filly Championship, on the dirt, at Laurel.

She returned the following June, after a nearly seven-month break, to kick off her 3-year-old year with a third-place finish in the Lady Shipman Stakes at Belmont Park, followed by consecutive runner-up finishes in the Coronation Cup Stakes at Saratoga (by a half-length) and Music City Stakes at Kentucky Downs (by one and a half lengths). In her fourth and final start of the 2020 season, she made her graded stakes debut in the Sands Point-G2 at Belmont in October, where she finished seventh in a field of eight.

Consigned to the 2020 Keeneland November Breeding Stock sale, she sold for $300,000 to Jackson Farms and returned last September for owners Madaket Stables and Wonder Stables, along with new partners Tony Weintraub and Brandon M. Dalinka, and trainer Christophe Clement. Miss J McKay finished sixth in a six-furlong allowance on the turf at Belmont, before returning late November to redeem herself with a half-length victory in an allowance at Aqueduct, going six furlongs on the turf in 1:09.16.

Miss J McKay is the first foal for her dam Ballykiss, a Maryland-bred daughter of Street Boss who has since produced a 2018 colt by Hangover Kid and a 2019 filly by Imagining. Ballykiss descends from one of the best families developed by famed breeder Allaire duPont at her Woodstock Farm, that of Thirty Years, Miss J McKay’s graded stakes-winning fifth dam. Thirty Years produced four stakes horses from seven foals, including stakes winner Thirty Flags. Her first foal was her stakes-placed daughter Fair Rosalind (by Exclusive Native), Miss J McKay’s fourth dam.

Fair Rosalind one-upped her dam as a producer, first with multiple graded stakes winner Betty Lobelia, an earner of $463,512, and then Crowned. The Maryland-bred champion 2-year-old filly of 1989, Crowned won or placed in 19 stakes, went on to win the Delaware Handicap-G2, counted a second in the Coaching Club American Oaks-G1 among her five graded stakes-placings, and earned $605,323. The daughter of Chief’s Crown produced 1999 Maryland-bred Horse of the Year Best of Luck and stakes-placed Crown You. Her first of 12 foals was Approve (by Deputy Minister), Miss J McKay’s second dam.

Approve was the dam of multiple stakes-placed Xtra Heart and four other foals when she was sold as a broodmare at the 2005 Fasig-Tipton Midlantic December sale, to the cover Two Punch, for $100,000, with Green Willow Farms making the purchase. Ballykiss, born in 2011, was her final foal. Sold as a yearling and 2-year-old, Ballykiss last sold at the same 2017 sale as her weanling daughter, in foal to Hangover Kid, with Lady Olivia at North Cliff making the purchase for $2,000.

Last year, Ballykiss was consigned to the Keeneland January Horses of All Ages sale and sold, in foal to Constitution, for $180,000 to WinStar Farm.