Hillwood Stable’s Cordmaker started the new year just as he ended 2021 when getting his third stakes win in a row by taking the $75,000 Jennings Stakes, for Maryland-bred/Maryland-sired, 4 & up, at Laurel Park on Saturday, Jan. 29. 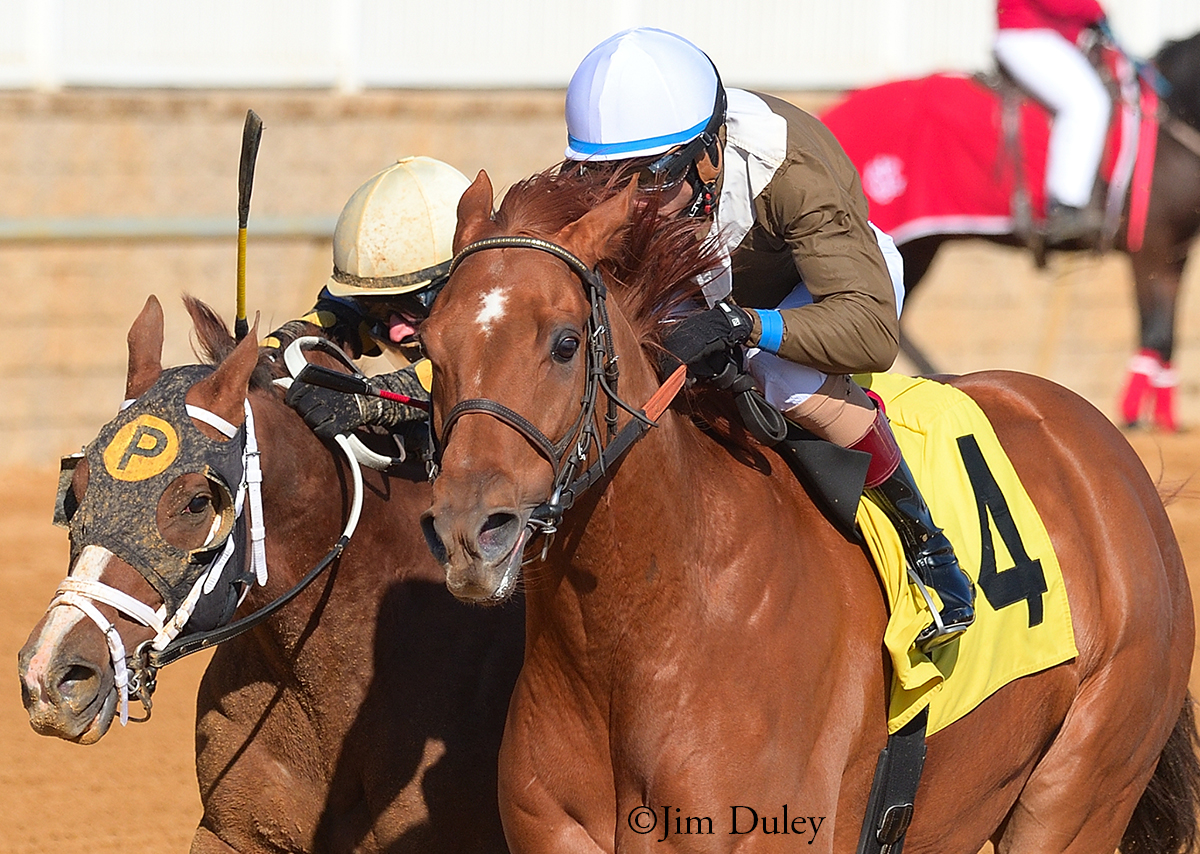 Making his third Jennings start in the past five years, the 7-year-old son of Curlin moved quickly to the front before settling to the outside of early leader Bustoff, who set the pace through a quarter-mile in :24.11. Galerio breathed down Cordmaker’s neck through a half-mile in :47.73 before the pair sidled up with Bustoff around the final turn. Into the stretch Cordmaker pulled ahead as Hanalei’s Houdini laid chase on the outside. Digging in, he outlasted Hanalei’s Houdini’s late challenge to score by a neck while finishing the mile in 1:39.70. Galerio was three-quarters of a length back in third.

The victory followed scores in the Richard W. Small (by one and three-quarters lengths) in late November and Robert T. Manfuso (by three and a half lengths) in late December. Recording his 13th career win in 35 starts, he boosted his earnings to $839,640.

His most recent win avenged his loss in last year’s Jennings, where he finished third behind Tattooed and Galerio, part of a 10-race losing streak that encompassed the eight starts of his 5-year-old season and first two of his 6-year-old season, seven of which were stakes. Despite that, Cordmaker placed in six of the stakes, with second-place finishes in the 2020 Deputed Testamony and Richard W. Small, and third-place finishes in the 2020 Pimlico Special-G3, Native Dancer and 2021 Harrison E. Johnson Memorial.

Following that, Cordmaker finished third in the Deputed Testamony Stakes last July at Pimlico before heading south to Colonial Downs to secure a two and a quarter lengths victory in the Victory Gallop Stakes, going one and one-sixteenth miles in 1:40.45. That win, along with the Richard W. Small and Robert T. Manfuso at the end of the year, helped him seal the overall title in the 2021 Mid-Atlantic Thoroughbred Championships (MATCH Series), after being the only horse to have had competed in all six races in his division (3-Year-Olds and Up Long-Dirt) that year.

Bred by the late Robert T. Manfuso and Katharine M. Voss, Cordmaker was purchased by Ellen Charles’ Hillwood Stable as a yearling for $150,000 out of the 2016 Fasig-Tipton Midlantic Eastern fall sale. The seventh foal out of Tanca, he is her third stakes winner, along with Corvus (Dance With Ravens) and 2019 Maryland-bred champion 3-year-old filly Las Setas (Seville-Ger). Tanca is the dam of seven starters, all winners, from 10 named foals of racing age. Her 2019 colt by Street Sense, a $240,000 Fasig-Tipton Midlantic fall sales yearling, isn’t named; she has a 2-year-old colt by Madefromlucky, Lucked In, who failed to reach his reserve as a yearling at last year’s Fasig-Tipton Midlantic fall sale; and last March, Tanca delivered a filly by Honor Code. She is expecting a foal by Vino Rosso this year.