Galerio locks down first stakes win in John B. Campbell

Bird Mobberley LLC and Grady Griffin’s Galerio, known for his perseverance on the track, especially in stakes company, finally secured his first stakes win with a thrilling run in the 68th running of the $100,000 John B. Campbell, for 4-year-olds and up on Saturday, Feb. 19 at Laurel Park. 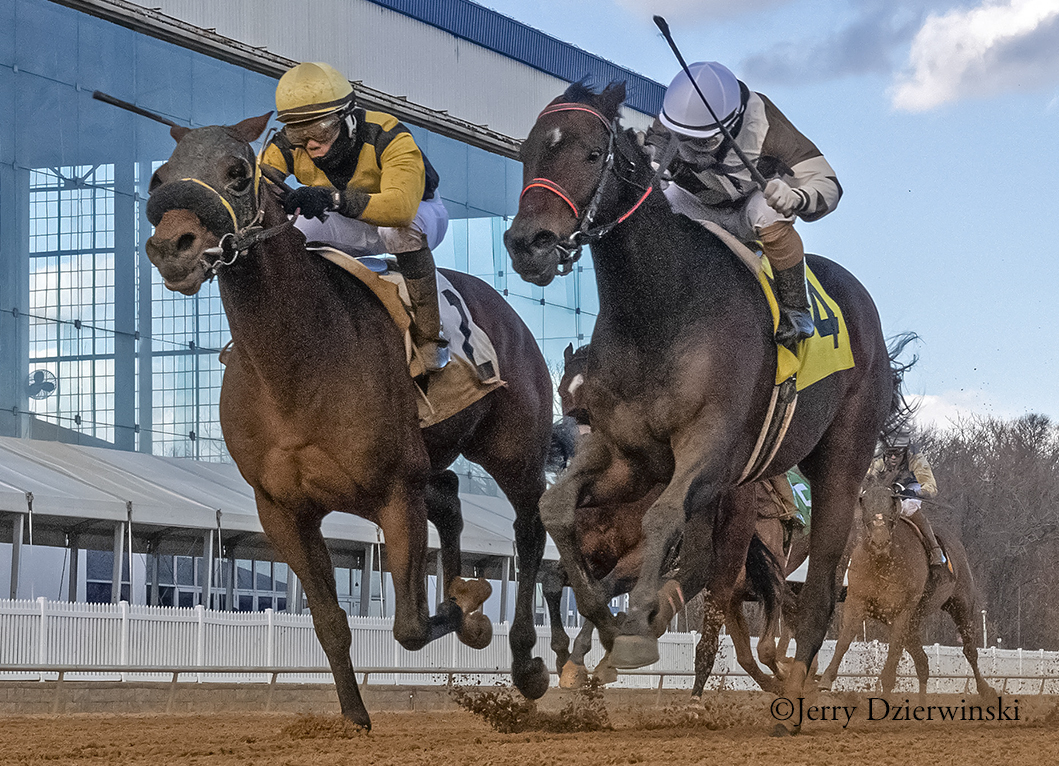 Making the second start of his 6-year-old season, following a third in the Jennings, Galerio broke quickly to the front before settling into third behind favorite Workin On a Dream and Gentleman Joe, who raced through an opening quarter-mile in :23.83 and a half in :46.66. Catching the leading pair around the far turn, Galerio fought with Gentleman Joe before pulling ahead to take the lead down the stretch, as Forewarned stormed down the center of the track. Forewarned closed in on him from the outside, but Galerio held on at the wire to win in a photo finish by a nose. Third-place finisher Gentleman Joe was three lengths back.

Final time for the one and one-sixteenth miles on the dirt was 1:43.67 and he earned a 100 Beyer Speed Figure.

“Every race he runs in his life he runs his eyeballs out,” said trainer John E. Salzman Jr., who won two of the six stakes on the card. “He’s a very nice horse. The good part is to have owners like this. I called them, they never questioned [claiming him]. He does everything perfect. He’s an easy horse to train.”

Claimed by his current connections for $50,000 in November in which he finished second going one and one-sixteenth miles, Galerio finished fourth in the seven-furlong Howard and Sondra Bender Memorial just a few weeks later, beaten a length and a half, and was runner-up in an allowance Dec. 30 when back at a mile and a sixteenth. He kicked things off this year with a third, two lengths behind Cordmaker, in the Jennings in January.

Running his heart out every time, Galerio has racked up 10 wins, 15 seconds and three thirds from 33 career starts, improving his overall earnings to $514,250.

“It was close,” jockey J.D. Acosta admitted. “The thing about this horse, he loves to finish second. He’s the kind of horse where you think you’re going to win by 20 turning for home and then he puts his head back and he starts running. When I saw that horse coming I said, ‘Not another second.’ But he got the job done.”

Originally campaigned by his breeder Dan Marconi and trainer Kevin Boniface, Galerio finished third in his debut as a 3-year-old at Delaware Park in May 2019 and picked up four seconds in his next six starts, before he was claimed away for $25,000 by trainer Claudio Gonzalez and owner Robert D. Bone.

The gelded son of Jump Start broke his maiden in his second start at 4 at Laurel, his 10th career start, winning a six and half-furlong maiden special weight by seven and a half lengths in Feb. 2020. The victory set the wheels of a successful season in motion, as Galerio made 10 more starts (from March through November), moving from starter-optional claimers to starter allowances and then allowance company and added seven more wins, and three seconds, to tie for first by number of wins on the national leaderboard in 2020.

He was claimed out of his final start of the season, a $35,000 allowance optional claimer that he won by one and three-quarters lengths in late November, by trainer Dale Bennett and owner SAB Stable Inc.

Heading into stakes company last year, ever the model of consistency, Galerio wheeled off three consecutive second-place finishes in the Jennings (by a neck), the John B. Campbell (by one and three-quarters lengths) and the Harrison E. Johnson Memorial (by a length). After a break in April, he came back in an allowance at Pimlico in May, which he won by seven lengths as he finished the one and one-sixteenth miles in 1:44.57.

That June, he made his first trip to New Jersey for his graded stakes debut in the Salvator Mile-G3 at Monmouth, where he finished third, just two and a half lengths behind winner Informative. The traveling continued as he followed up with a fourth in the Battery Park Stakes at Delaware in July, a second in a claimer at Colonial Downs in August, where he was taken for $40,000 by trainer Jamie Ness for his Jagger Inc., and was second for his new connections next out in the M.P. Ballezzi Appreciation Mile Stakes at Parx in October.

Galerio is the first foal and only winner from two starters produced by Congaree Princess, a winning daughter of Congaree who Marconi picked up for free in January 2013, after the mare finished her racing career a month prior at Mountaineer. Her second foal, Bella Bettina, is a 4-year-old daughter of Midshipman who has placed twice in her 13 starts so far.

Last year, Congaree Princess foaled a Golden Lad colt in April, and this year she is expecting a foal by Maclean’s Music.