Whereshetoldmetogo repeats in Not For Love

Brittany Russell trainee Whereshetoldmetogo laid it all out on the track in his 7-year-old debut, fighting off Jaxon Traveler to win the $75,000 Not For Love Stakes, for Maryland-bred/sired, 4 & up, by three-quarters of a length at Laurel Park on Saturday, March 19. 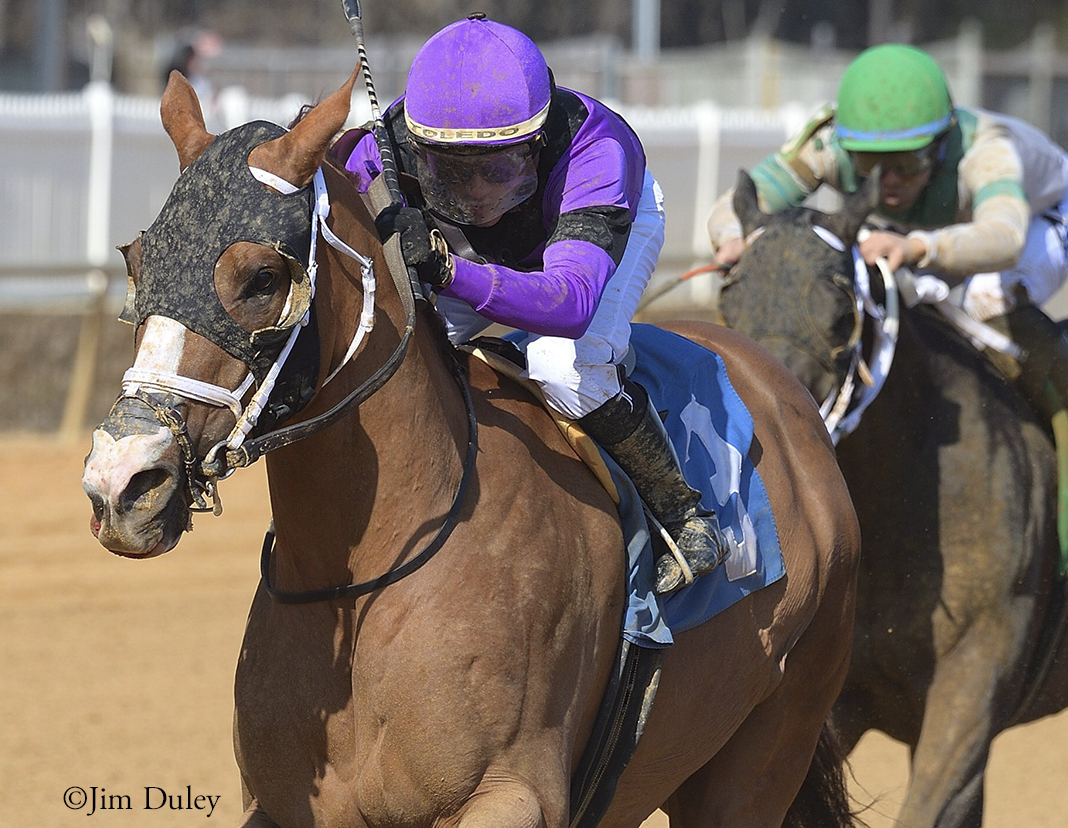 The reigning winner of the Not For Love was seven lengths off the early lead as Jaxon Traveler took the field through an opening quarter-mile in :22.53. Making a four-wide move on the turn, Whereshetoldmetogo ranged up alongside Air Token racing in second as Jaxon Traveler flew through a half-mile in :45.62 before heading into the stretch. Battling and passing Air Token down the center of the track, Whereshetoldmetogo gave it his all to catch Jaxon Traveler and pass him just before crossing the wire in a final time of 1:10.97 for the six furlongs.

“He’s an older horse and he owes no one anything at this rate,” winning trainer Brittany Russell said. “He’s still showing up on the day so the fact that we can do it the way we are, it’s nice. It’s rewarding, and he deserves it.”

Whereshetoldmetogo’s victory in last year’s running of the Not For Love, by two and a half lengths over Karan’s Notion, kicked off a season of success for the veteran gelding, who won four of his eight stakes starts, including a four-length win in the Alapocas Run at Delaware Park in July and back-to-back scores in the New Castle at Delaware in September and the Howard and Sondra Bender Memorial at Laurel in November. He was also third in the Challedon Stakes at Pimlico in late July.

It was after the Star de Naskra that Esposito sold a majority interest to a group led by Madaket Stables, which included Ten Strike Racing and Michael E. Kisber. In his first start for his new connections, he became graded stakes-placed when second after his notorious stretch run in Parx Racing’s Gallant Bob Stakes-G3 in 2018, where he tried to savage Firenze Fire and was beaten a neck.

Transferred to the barn of trainer Brad Cox in 2019, he made four starts, with his best runs an allowance victory at Churchill Downs and a third-place finish in the Thanksgiving Classic Stakes at Fair Grounds that November. After an eight-month hiatus, Whereshetoldmetogo returned in July 2020 to finish third in the Iowa Sprint Stakes at Prairie Meadows. Transferred from Cox to Russell, he finished out the year with back-to-back victories in the Frank Y. Whiteley Stakes and Dave’s Friend Stakes.

Bred by David Wade, Whereshetoldmetogo is one of seven winners from eight starters produced by Undisputed Legend, a winning daughter of Domestic Dispute and half-sister to Maryland-bred champion Celestial Legend and the dam of Maryland-bred champion Miss Charm City. Undisputed Legend’s nine foals include stakes-placed Castlewood Terrace and a yearling colt by Mendelssohn. She is expecting a foal by Vekoma this year.

Whereshetoldmetogo took another big step on the road to millionaire status on Sept. 30 at Delaware Park when winning the New Castle Stakes for the second straight year.