C J I Phoenix Group and No Guts No Glory Farm’s Fille d’Esprit delivered a standout performance in the $75,000 Conniver Stakes, for Maryland-bred/sired fillies and mares, 4 & up, as she swept home to win by eight lengths on Saturday, March 19 at Laurel Park. 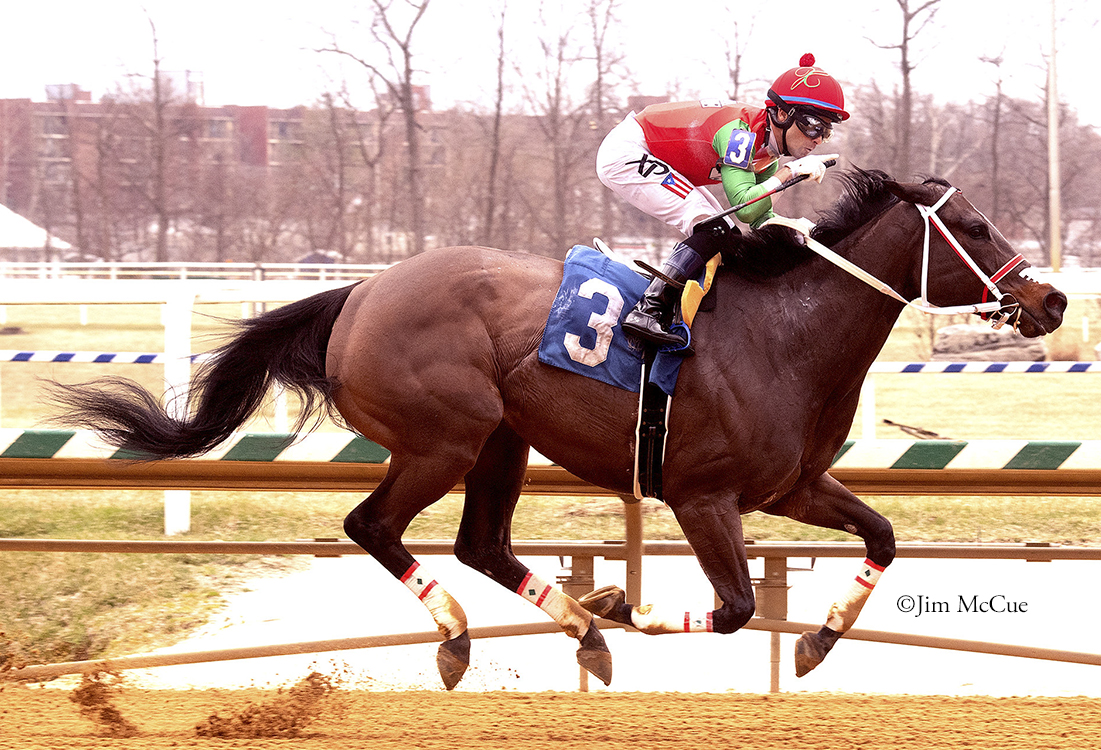 Making her third stakes start of the year and sent off as the 7-10 favorite, Fille d’Esprit went straight to the front before settling into second on the outside of early leader Combat Queen, who led through an opening quarter-mile in :23.82, as defending champion Kiss the Girl raced to the outside in third. As they headed into the final turn, Fille d’Esprit moved up the outside and took over the lead from Combat Queen before pulling away effortlessly down the stretch. The Jerry Robb trainee, ridden by Xavier Perez, finished the seven furlongs in 1:24.54, with runner-up Kiss the Girl a nose ahead of third-place finisher Artful Splatter.

“It’s always special, especially with this filly because I claimed her because she’s bred identical to Anna’s Bandit,” Robb said. “She seems to be improving with each race.”

The 6-year-old daughter of Great Notion made her debut as a $10,000 maiden claimer at 4 in June 2020 at Laurel Park for breeder/owner Jim and Gail Poulos’ Sweet Spirits Stables LLC and trainer Christine Clagett, and broke her maiden by three lengths in her second start.

She was claimed two months later, in her third start, for $10,000 by Robb for his and his wife Gina’s No Guts No Glory Farm and partner C J I Phoenix Group. Fille d’Esprit proved the claim worthwhile, as she won the five and a half-furlong race.

After a second in a six-furlong $10,000 claimer at Pimlico in September, she won four straight to close out the season – a four and a half-length victory in an October claimer and three straight allowance wins, at five and half furlongs and six furlongs, at Laurel in November and December.

Fille d’Esprit was off for 10 months before returning to make her stakes debut in the Maryland Million Distaff last October, where she finished last in the field of six. She followed up with a second in a six-furlong allowance optional claimer (no tag), before scoring by seven lengths in her next start in December.

Back in action in January, she finished seventh in the What a Summer Stakes after a troubled start, and followed with a third in the Barbara Fritchie-G3, a length behind winner Glass Ceiling, after steadying in traffic while making a run.

“The race before the Fritchie where she walked out of the gate and then got back in the race gave me confidence to run in the Fritchie,” Robb said. “This is a big step down from the Fritchie, so we had to be here.”

Following in the hoofprints of Robb’s star trainee Anna’s Bandit, also a daughter of Great Notion out of a No Armistice mare, Fille d’Esprit is the first foal out of the Poulos’ homebred mare Sweet Valor, who has two winners from two starters. The mare has a yearling filly by No Never No More named Never More Valor and is expecting a foal by Blofeld this year.