Deborah Greene and Hamilton Smith’s homebred Luna Belle continues to dazzle as she picked up her fourth stakes win in four months, winning the $100,000 Beyond The Wire, for 3-year-old fillies, by three and a half lengths over Candy Light at Laurel Park on Saturday, March 19. 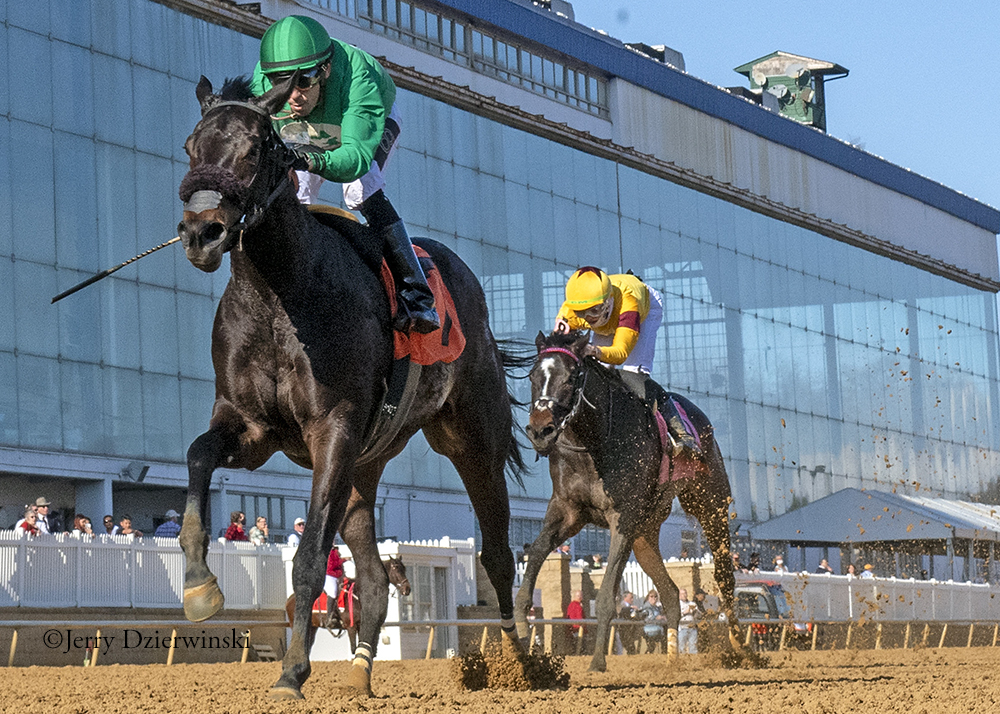 Stretching out to a mile for the first time in 10 career starts, Luna Belle was sent off the 1-5 favorite in the field of eight and found herself closer to the front than in recent efforts, just to the outside of early leader Diamond Collector and longshot Click to Confirm as they hit the opening quarter-mile in :24.19. Moving up around the far turn, Luna Belle challenged Click to Confirm for a few strides before pulling ahead and only increasing her lead as they turned for home. Though Click to Confirm chased from the inside and Candy Light pursued from the outside, they couldn’t catch Luna Belle and jockey Denis Araujo, who stopped the clock in a final time of 1:38.93.

The 3-year-old daughter of Great Notion, trained by Smith, extended her stakes win streak to four as she added to a two and three-quarters lengths victory in the Maryland Juvenile Filly Championship in December, a six-length score in the Xtra Heat in January and a three-length win in last month’s Wide Country, all at Laurel.

Luna Belle, bred by Greene, Smith and Greene’s late father Fred, kicked off her career at Colonial Downs last summer on the turf before breaking her maiden in her third outing, and first on the main track, winning a six-furlong maiden special weight by six lengths in August. She followed up with a third in her allowance debut in her first start at Laurel; a fourth in the Maryland Million Lassie, just a length behind winner Buff My Boots, in October; and a hard-fought second in the Smart Halo Stakes in November.

Smith said he remains undecided on what to do next with the 2021 Maryland-bred champion 2-year-old filly, though the next local option for her would be the $125,000 Weber City Miss Stakes going about one and one-sixteenth miles at Laurel April 16. The winner of that race earns an automatic berth to the $250,000 Black-Eyed Susan Stakes-G2 at Pimlico on Friday, May 20.

“We haven’t thought too much past this race,” Smith said. “The Weber City Miss is there, and there’s a few out-of-town races coming up a little later on after the Weber City Miss. I’m not sure what I’m going to do with her yet. I’ll see how she goes this week and then make a decision.”

The bay filly has improved her record to five wins, one second and two thirds from 10 career starts, while earning $306,570.

Luna Belle is the fifth of seven foals out of Heavenly Moon, a stakes-placed daughter of Mojave Moon bred and owned by Fred Greene Jr. Her four winners include stakes-placed Moon Virginia (Jump Start), The Poser (Bandbox) and Chinquapin (Orientate).

Heavenly Moon’s 2-year-old Run Bucky Run, a full-brother to Luna Belle, is currently in training, her yearling filly by Bourbon Courage has been named Little Engine, and she is expecting a foal by Golden Lad this year.