Deborah S. Greene and Hamilton Smith’s homebred Luna Belle has gone above and beyond in just 11 career starts, with plans to go much further after her $125,000 Weber City Miss Stakes victory, at Laurel Park on Saturday, April 16, earned her an automatic berth to the Black-Eyed Susan-G2 at Pimlico on Friday, May 20. 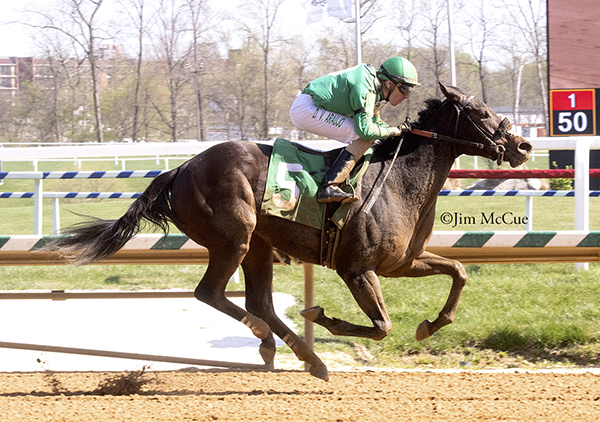 Making her first start around two turns, Luna Belle bided time in second-to-last position as early leader Chardonnay, racing just ahead of Zawish, led the field of six through an opening quarter-mile in :24.31. Jockey Denis Araujo did his best to hold the 3-year-old filly as they closed in on the rest of the field up the backside and around the far turn, before letting her go as they turned for home. Zipping between Khuluq and Click to Confirm, Luna Belle flew down the center of the track to win by four and a half lengths over Khuluq, with Click to Confirm three and three-quarters lengths back in third. Final time for the one and one-sixteenth miles was 1:45.44.

“We’re going to try it. As long as everything looks good after this one, that’s what we plan to do. We’ll run in the Black-Eyed Susan and then I’m going to give her some time, come back in mid-summer maybe and look to the fall with Maryland Million and all that,” Smith, also her trainer, said. “Everyone tells me to go out of state and all that, but why go out of state when you can win here at home? She’s doing awfully good, and we’re very proud of her.”

The daughter of Great Notion added a fifth consecutive stakes win to her record, following up on a two and three-quarters lengths victory in the Maryland Juvenile Filly Championship in December, a six-length score in the Xtra Heat in January, a three-length win in the Wide Country in February and a three and a half-length win in the Beyond the Wire in March, all at Laurel.

Luna Belle, bred by Greene, Smith and Greene’s late father Fred, kicked off her career at Colonial Downs last summer on the turf before breaking her maiden in her third outing, and first on the main track, winning a six-furlong maiden special weight by six lengths in August. She followed up with a third in her allowance debut in her first start at Laurel; a fourth in the Maryland Million Lassie, just a length behind winner Buff My Boots, in October; and a hard-fought second in the Smart Halo Stakes in November.

“I once heard somebody say in the winner’s circle at the Maryland Million that this was a dream come true. This really isn’t a dream come true, because I never dreamed this much,” Greene said. “And it’s all in honor of my father. He was the breeder, the breeder of the mare, and raced the granddam. I’m just thrilled. And now I’m dreaming a lot bigger.”

Running at least once a month since her debut last July, Luna Belle improved her record to 6-1-2 from 11 career starts with $381,570 earned.

Luna Belle is the fifth of seven foals out of Heavenly Moon, a stakes-placed daughter of Mojave Moon bred and owned by Fred Greene Jr. Her four winners include stakes-placed Moon Virginia (Jump Start), The Poser (Bandbox) and Chinquapin (Orientate).

Heavenly Moon’s 2-year-old Run Bucky Run, a full-brother to Luna Belle, is currently in training, her yearling filly by Bourbon Courage has been named Little Engine, and she is expecting a foal by Golden Lad this year.