The Elkstone Group LLC (Stuart Grant)’s homebred Joe fought off stablemate and fellow Maryland-bred Mr Jefferson to win the $125,000 Federico Tesio, for 3-year-olds, by a head at Laurel Park on Saturday, April 16. The victory earned the Declaration of War colt a spot in this year’s running of the Preakness-G1 on Saturday, May 21 at Pimlico. 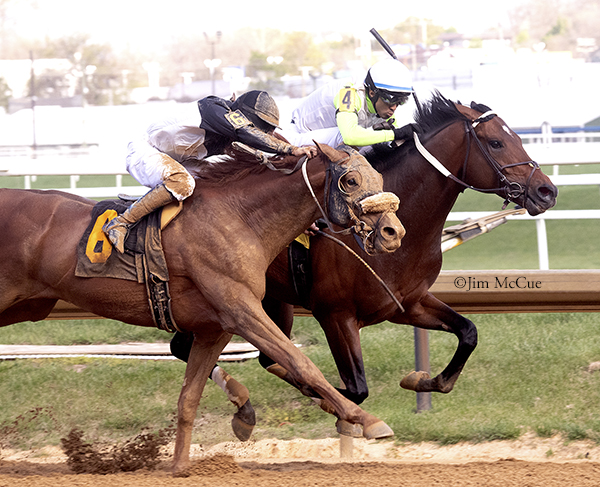 Returning to the track a month after his runner-up finish in the Private Terms Stakes, the Mike Trombetta trainee headed straight to the front of the nine-horse field to chase early leader Vine Jet through an opening quarter-mile in :24.94 and a half in :49.63. Vine Jet began to fade as Secret Alliance and Smarten Up challenged Joe from the outside, with the trio leading around the final turn. Joe took over down the stretch but Mr Jefferson was charging and caught up in the shadow of the wire. Joe dug in and jockey Victor Carrasco urged him ahead in the final strides. The final time was 1:52.30 for the mile and a sixteenth.

Joe is not nominated to the Triple Crown, but could be supplemented to the $1.5 million Preakness-G1 for $150,000 when entries are taken May 16.

The bay colt, named after President Joe Biden, improved his overall record to four wins and a second from six career starts, with $228,324 in earnings.

Joe finished fifth in his debut last October, going five and a half furlongs on the turf, before returning a month later to break his maiden by three and a half lengths on the main track. He wrapped up his 2-year-old season with a victorious stakes debut in the Maryland Juvenile Championship in December, winning by one and a half lengths over Alottahope in a final time of 1:25.63 for the seven furlongs and earning state-bred divisional honors.

He made his first trip around two turns in an allowance at Laurel in January, winning by two and a half lengths. After a quick break in February, he returned in March to finish second in the Private Terms, just one and three-quarters lengths behind Shake Em Loose.

Joe is the fourth foal out of Battle Bridge, a winning daughter of Arch who has produced three winners from four starters including 2021 graded stakes-placed Irony of Reality (Animal Kingdom), third in Gulfstream Park’s La Prevoyante Stakes-G3 on the turf. Elkstone sold Battle Bridge, in foal to War of Will, for $26,000 at the 2021 Keeneland November Breeding Stock sale. She hasn’t had a live foal since Joe.