The Elkstone Group’s homebred Joe made every stride count in the $100,000 James W. Murphy for 3-year-olds, as he slugged it out with favorite Ready to Purrform down the stretch and won by a neck on Preakness Day at Pimlico, Saturday, May 21. 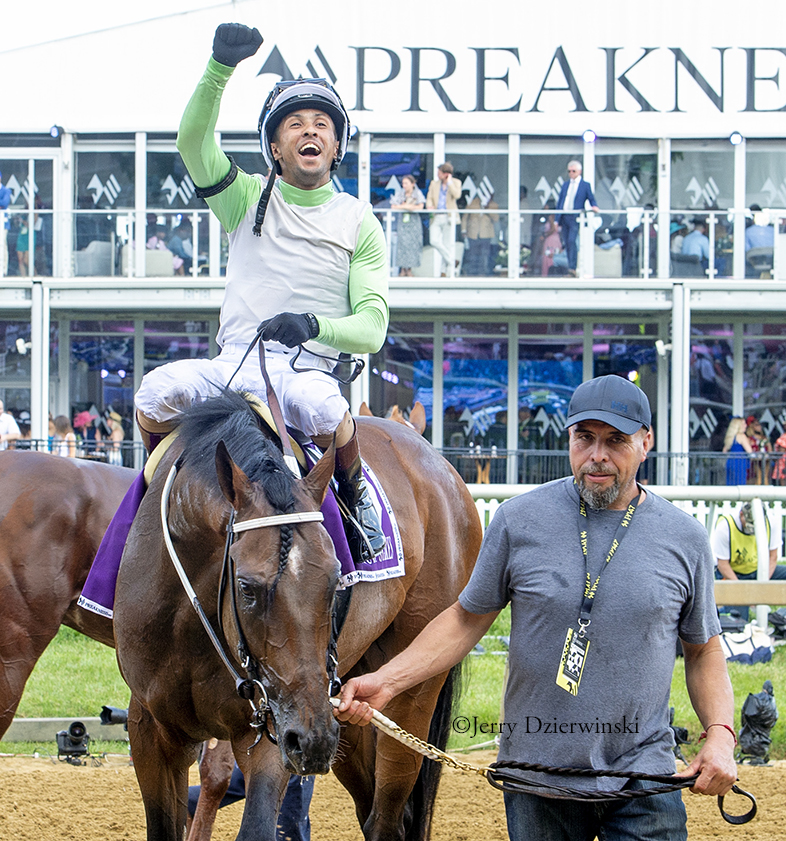 Opting out of an automatic berth in the Preakness Stakes-G1, Joe switched back to the turf and found his place along the rail, to the inside of fellow Maryland-bred Crabs N Beer, racing mid-pack as Uncaptured Spirit and Epic Luck dueled for the lead through an opening quarter-mile in :22.85. Uncaptured Spirit took over through a half-mile in :45.85 as Crabs N Beer moved on the outside and Joe made his move up the inside, pulling ahead of the leader down the stretch as Ready to Purrform caught him to battle it out in the final furlong. But in one final surge of power, Joe got a neck in front and hit the wire in a final time of 1:35.26 going a mile.

“He’s been nothing but great to me. He’s always been very professional since day one, and he’s a fighter. I knew when we had the trip we had and hooked up with the other horse down the stretch, he wouldn’t give up. He fought all the way down to the wire and got it done,” said jockey Victor Carrasco.

Trained by Mike Trombetta, Joe picked up his third career stakes win and second this season, following a head victory over Mr Jefferson in the Federico Tesio at Laurel Park in April.

“This is so exciting. It really is because this is the second stakes race in a row where he was headed in the stretch and he just keeps fighting back. It’s just awesome when he does that. He just doesn’t know how to give up,” said The Elkstone Group’s Stuart Grant. “The switch over to turf, [trainer] Mike [Trombetta] had been pushing for it and I said, ‘Mike, this horse will either make you a genius or a dummy.’ Mike said he is a turf horse, and he was right. He ran his first race on turf, but that was too short, and it was the only time he was off the board.”

Joe finished fifth in his debut last October, going five and a half furlongs on the turf, before returning a month later to break his maiden by three and a half lengths on the main track. He wrapped up his 2-year-old season with a victorious stakes debut in the Maryland Juvenile Championship in December, winning by one and a half lengths over Alottahope in a final time of 1:25.63 for the seven furlongs and earning state-bred divisional honors.

He made his first trip around two turns in an allowance at Laurel in January, winning by two and a half lengths. After a quick break in February, he returned in March to finish second in the Private Terms, just one and three-quarters lengths behind Shake Em Loose.

Joe is the fourth foal out of Battle Bridge, a winning daughter of Arch who has produced three winners from four starters including 2021 graded stakes-placed Irony of Reality (Animal Kingdom), third in Gulfstream Park’s La Prevoyante Stakes-G3 on the turf. Elkstone sold Battle Bridge, in foal to War of Will, for $26,000 at the 2021 Keeneland November Breeding Stock sale. She hasn’t had a live foal since Joe.