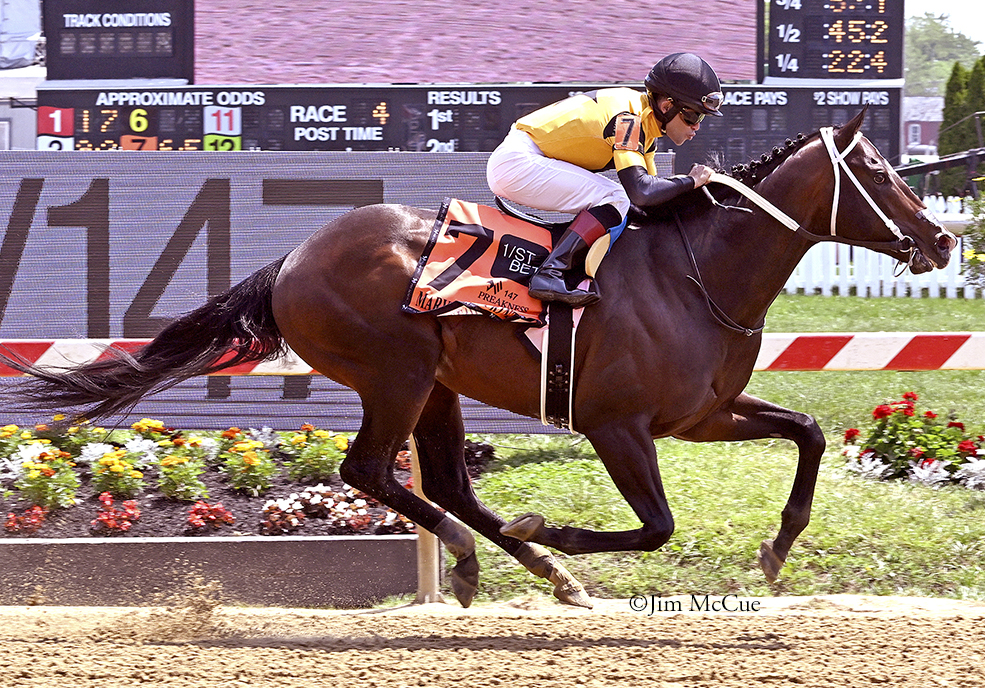 Coming in off of back-to-back second-place finishes in the Not For Love at Laurel and an allowance at Aqueduct, Jaxon Traveler and jockey Joel Rosario quickly took the lead, setting the pace through an opening quarter-mile in :22.95 with War Tocsin pressing to his inside. War Tocsin and Threes Over Deuces battled behind the leader into the final turn, before Threes Over Deuces increased the challenge down the stretch, though he failed to catch front-running Jaxon Traveler. The Steve Asmussen trainee crossed the wire one and three-quarters lengths ahead with ears up, finishing the six furlongs in 1:09.70.

“He was going along pretty easy, and I was just going along for the ride,” said Rosario. “He showed speed from the start, so I let him go. He broke good, so I put him on the lead. I was in front off the inside on the turn. When [the other horse] came to me off the turn, my horse really responded. He did great today.”

Sold for $80,000 as a yearling and later purchased for $140,000 by West Point Thoroughbreds out of the 2020 OBS April sale, Jaxon Traveler broke his maiden on debut at Pimlico that September, winning by an impressive 10 lengths as he finished the six-furlong test in 1:10.41. The following month, he scored by four in a six-furlong allowance at Laurel Park which led him right into a successful stakes debut that December, where he beat Singlino by three-quarters of a length in the Maryland Juvenile Futurity. His stellar three-win season earned him the title of 2020 Maryland-bred champion 2-year-old male.

The 3-year-old colt raced exclusively in stakes last year, starting off with a runner-up finish (by a head) in the Gazebo at Oaklawn Park in March, followed by a return to the winner’s circle after a two and three-quarter-length victory in the Bachelor as the favorite, stopping the clock for six furlongs in 1:10.07.

He made his graded stakes debut in the Grade 3 Chick Lang at Pimlico last Preakness Day, and finished second, just a length and a quarter behind stablemate Mighty Mischief. Jaxon Traveler took his talents north in June and July—first to Woodbine, where in his first start on the all-weather track he finished second in the Woodstock. Next out, in Saratoga’s Grade 3 Quick Call at five and a half furlongs on the turf, he wound up third.

The son of Munnings closed out his season with a three-length victory in the Star de Naskra Stakes at Pimlico in August, back-to-back third-place finishes in the Allied Forces Stakes at Belmont and Steel Valley Sprint Stakes at Mahoning Valley, and a runner-up finish in the Gravesend Stakes at Aqueduct in December. Jaxon Traveler was named the 2021 Maryland-bred champion 3-year-old male.

Making three of his four starts in Maryland this year, the colt started things off with a fifth in the Fire Plug Stakes in January.

Bred by Dr. and Mrs. A. Leonard Pineau, Jaxon Traveler is the fourth of five foals of racing age for stakes-placed Listen Boy. The daughter of After Market has four winners from five starters, including $358,297-earner Nuclear Option. Listen Boy has a yearling colt by Cross Traffic and was expecting a foal by Liam’s Map this season.