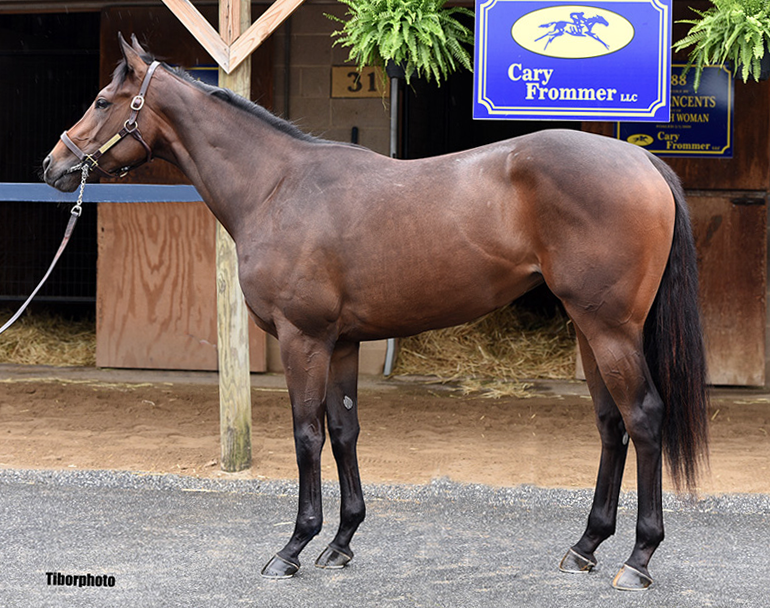 Consigned by Cary Frommer, who purchased the filly last year for $200,000 at the Fasig-Tipton Midlantic yearling sale, the daughter of Nyquist breezed an eighth in :10.2 at the under tack show.

Bred by Bowman and Higgins Stable, the bay filly is the second foal out of How My Heart Works, a winning daughter of Not For Love, who is a Bowman and Higgins homebred. Her first and only foal to race so far is multiple stakes winner Monday Morning Qb, a 5-year-old son of Imagining who won the 2020 Maryland Million Classic.

Late this April, How My Heart Works foaled a full-brother to the Nyquist filly.

The second-highest priced Maryland-bred was a filly by Friesan Fire out of the multiple stakes-placed Forest Wildcat mare Kiss in the Forest, who sold for $350,000 to Marette Farrell, agent for Exline - Border Racing LLC out of the Tom McCrocklin consignment. Bred by Barak Farm and Sharon Dodgen, she breezed an eighth in :10 flat. McCrocklin purchased her last year for $50,000 at Fasig-Tipton’s Midlantic yearling sale.

Of her dam’s four foals, one is a winner from two starters. Kiss in the Forest produced a filly by Cupid this February.

Maryland sires were led by Country Life Farm’s Friesan Fire, who had three sell for $399,000, an average of $133,000, highlighted by the $350,000 Maryland-bred filly who breezed an eighth in :10 flat. Northview Stallion Station’s Golden Lad had a Pennsylvania-bred colt sell for $215,000, one of two offered to sell, and first-year sire Hoppertunity had two sell for an average of $125,000, topped by a Pennsylvania-bred colt sold for $130,000. Country Life Farm’s Mosler was also the sire of a six-figure colt, his only offered.