Why Not Tonight delivers in All Brandy

Wasabi Ventures Stables’ Why Not Tonight answered the question decisively in her stakes debut as she ran down leader Can the Queen to win the $75,000 All Brandy Stakes, for Maryland-bred/sired fillies and mares, 3 & up, by a half-length on Sunday, June 19 at Laurel Park. 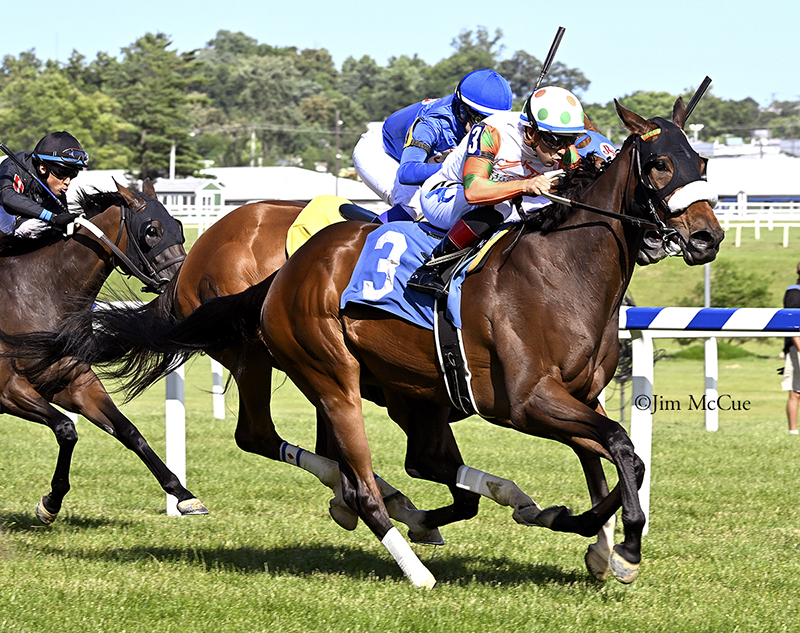 Making her return to Laurel Park after more a year, Why Not Tonight and jockey Angel Cruz settled into second behind Can the Queen, who ran off with the lead to set opening fractions of :23.95 and :47.40. Heading into the far turn, Why Not Tonight closed the gap and descended on Can the Queen from the outside, chasing intently as they turned for home. No Mo Lady attempted to run down the leader from the inside, but Why Not Tonight would be the one to finally wear her down as she took over just before hitting the wire in a final time of 1:41.30 for the one and one-sixteenth miles on the turf. Coconut Cake was third, a neck behind Can the Queen, and No Mo Lady was a length back in fourth in the field of 12.

“I told Angel she’s got some speed, but she’ll kind of walk away from the gate. I think that’s what happened to her last time. She kind of broke slow and then just got covered up and was in bad trouble,” trainer Jesus “Jesse” Cruz said. “I told Angel to be aggressive with her leaving there. We thought [Can the Queen], coming off the short races, would have much more speed so we were hoping to just be tucked in behind her and hopefully we’d get some room turning for home. No one really came up next to her, so we had the perfect trip.”

The filly not only secured her first stakes victory in her first attempt, but also became the first stakes winner for Wasabi and Cruz. The team claimed her from Country Life Farm for $16,000 last September at Monmouth, as Why Not Tonight won a mile-long turf test by three lengths.

Purchased by Country Life as a yearling for $57,000 out of the 2019 Fasig-Tipton Midlantic Eastern fall sale, Why Not Tonight placed in one of two starts the following year as a 2-year-old before picking things up in the spring last year. She broke her maiden on the turf in her fourth career start by a head at Pimlico while in for a $25,000 tag, and ran fourth in back-to-back finishes when stretching out before she was claimed. Why Not Tonight closed out her 3-year-old season with a dominant allowance victory, by seven and three-quarters lengths, going a mile on the turf at Tampa Bay Downs in November.

The All Brandy was just her third start this season, following a seventh in a handicap over the all-weather track at Gulfstream Park in January and a fourth in an allowance on the turf at Pimlico in May.

“When we claimed her we thought she was a nice filly. We didn’t get to run her until Tampa and she ran a monster race first time out. Then we tried her in a [handicap] on the Tapeta which she didn’t handle much at Gulfstream,” Cruz said. “We got her up here and I was excited to run her against Maryland-breds. Sometimes it’s racing luck, especially on the turf. We just had a troubled trip last time. She came out of it well, thank God, and she trained well. She had a really nice breeze last week at Monmouth. I told Angel if she got a clean trip today she’d be right there with them. She’s a fighter. [Can the Queen] didn’t want to give up and she fought to get to the wire first.”

The newly minted stakes winner, a 4-year-old daughter of Tapiture, improved her overall record to 4-0-1 from 11 career starts with $114,457 in earnings.

Bred by Mr. and Mrs. Charles McGinnes, Why Not Tonight is the second foal out of Pay the Lady. A winning daughter of Not For Love also bred by the McGinneses, Pay the Lady was sold as a yearling but her breeders got her back following her racing career. Pay the Lady has four foals of racing age, her two to start are both winners. Her most recent foal is a yearling colt by Race Day named Who Knows.