Louis A. Bisso Jr.’s Nick Papagiorgio was more than ready this time around, firing away down the stretch under Horacio Karamanos and outlasting a surge of late challenges to win the $75,000 Find Stakes, for Maryland-bred/sired, 3 & up, by a half-length at Laurel Park on Sunday, June 19. 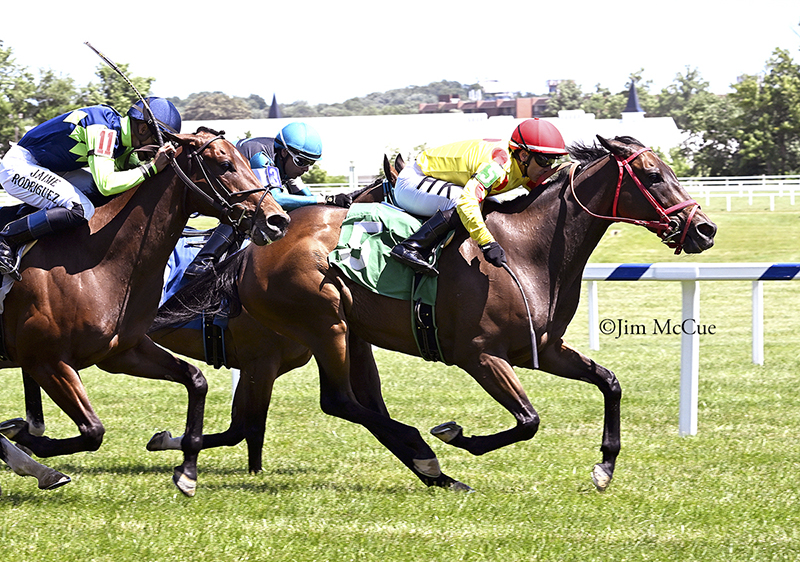 Making his first stakes start since the Maryland Million Turf last October, Nick Papagiorgio found himself between lukewarm favorite Cannon’s Roar and Plot the Dots early as 41-1 The Wolfman led the 11-horse field, just ahead of Street Copper, through an opening quarter-mile in :23.88. After a half in :48.16 and three-quarters of a mile in 1:11.79, challengers surged ahead around the final turn, with Plot the Dots moving up the outside as defending champion Somekindofmagician, Nick Papagiorgio and B Determined did the same. Nick Papagiorgio took over mid-stretch, leading Somekindofmagician to his inside and B Determined on the outside, and staying ahead of a late run from Audacious Quality, to reach the wire on top. Somekindofmagician was second, B Determined a nose back in third and Audacious Quality a head back in fourth. Final time for the one and one-sixteenth miles on the dirt was 1:41.33.

“We gave him that prep race over at Presque Isle and brought him down here. Horacio and I talked about staying close to the pace, and the horse did the rest,” trainer Michael LeCesse said. “We don’t have a perfect schedule, but he’ll be back here in Maryland.”

The 6-year-old Outflanker gelding redeemed himself after finishing second in last year’s attempt at the Find.

Nick Papagiorgio made his first start for Bisso and LeCesse in July 2021 at Presque Isle Downs, finishing second in a one mile and seventy yards starter/optional claimer (no tag) over the all-weather track. Since then, he’s added four more placings in eight starts, including his run in last year’s Find and an eighth in the Maryland Million Turf. His most recent victory was his first for his current connections, as Nick Papagiorgio improved his overall record to 10 wins, seven seconds and six thirds from 35 career starts while boosting his earnings to $312,080.

Sold for $10,000 as a yearling in the 2017 Fasig-Tipton Midlantic Eastern fall sale, he debuted as a 2-year-old at Laurel Park in October, but didn’t break his maiden until his third start that December, where he won by a length in a $25,000 maiden claimer going a mile. From there he continued through the claiming ranks around the Mid-Atlantic tracks, picking up the majority of his wins and changing hands along the way through mid-2020.

In his first allowance attempt, at Laurel as a 4-year-old in July 2020, he won by three-quarters of a length going one and one-eighth miles on the turf. He finished second by a nose two weeks later, going the same distance in a race switched to the dirt, before picking up back-to-back allowance wins at Laurel and Pimlico prior to his stakes debut. In his first attempt at the Maryland Million Turf that fall, he finished third, just two and a quarter lengths behind winner Pretty Good Year.

Bred by Cynthia Pence and Philip Spingler, Nick Papagiorgio is the last foal out of his dam Lady Lear, a winning daughter of Lear Fan. The mare had three winning starters from four foals produced, with Nick Papagiorgio her most successful progeny.