Edie Meeny Miny Mo is an extremely fast filly who dares the rest to catch her. Four times in seven starts she have proven elusive, the latest in Monmouth Park’s $100,000 Regret Stakes for 3-year-old fillies racing six furlongs on July 2.
Holly Hill Stables LLC’s 4-year-old daughter of Upstart quickly cleared her five rivals from her outside post and led through fractions of :22.29, :44.44 and :56.28. When Club Car took aim in the final furlong, Edie Meeny Miny Mo dug in under Paco Lopez and the two favorites battled down the stretch, with Edie Meeny Miny Mo getting her head in front at the wire. Final time was a quick 1:08.71.
It was the first stakes win for Edie Meeny Miny Mo, who previously ran twice in graded stakes. She was second in her stakes debut, the historic Grade 3 Monmouth Oaks at a mile and a sixteenth last July, after setting the pace and kicking clear in the stretch before giving way grudgingly. She shipped to Saratoga for her next start, the Grade 2 Prioress at six furlongs, and blazed through an opening quarter in :22.25 and a half in :45.06. She gave way to finish fifth but was only beaten a total of five lengths.
A long-legged dark bay from the first crop of millionaire Upstart out of 2011 Maryland-bred champion 2-year-old filly Plum, Edie Meeny Miny Mo stood out at the Fasig-Tipton Midlantic 2-year-olds in training sale in late June 2020. Getting an eighth-mile in :10.0 at the under tack show, equaling the fastest time of any horse in the sale, she was purchased by Sallusto/Albina, agent,  for $400,000. Consigned by Cary Frommer, she was the second-highest priced filly of the sale.
Edie Meeny Miny Mo didn’t race at 2, but dazzled when she made her first two appearances at Pimlico the following spring, winning an April waiver maiden and a June allowance by a combined 10 1/4 lengths. 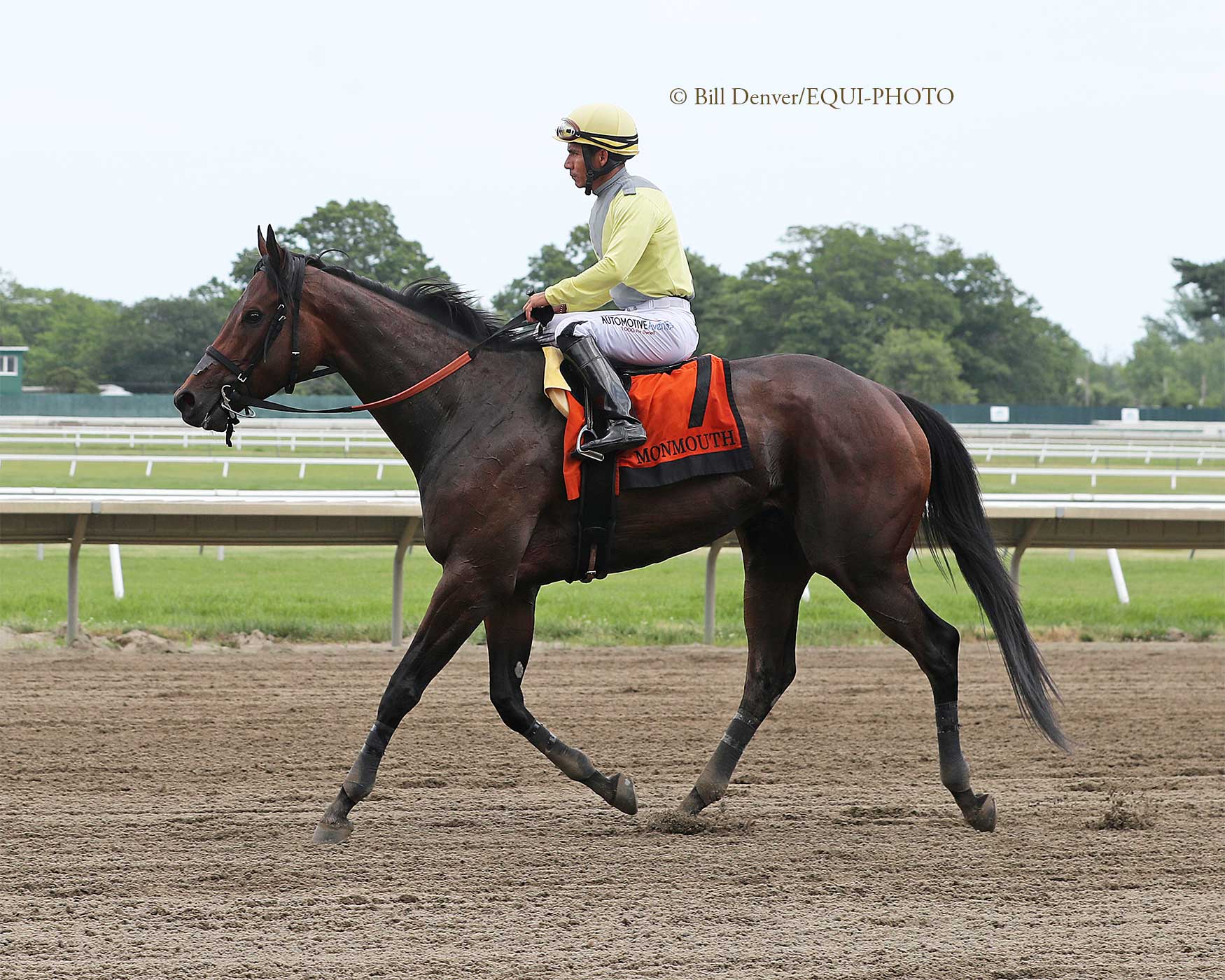 Transferred from trainer Miguel Vera to Michelle Hemingway this year, Edie Meeny Miny Mo didn’t get the lead in her first start of the season at Tampa Bay Downs in April and ran evenly, finishing fourth. Her spark returned next out in a June allowance at Monmouth as she posted fractions of :22.10, :45.17 and :57.79 and drove home a three and a quarter-length winner going six furlongs.
She now has earnings of $211,194.
Edie Meeny Miny Mo is the latest of a line of stakes performers bred by David and JoAnn Hayden’s Dark Hollow Farm descending from the Naked Sky mare Munchkin Michele, her third dam.
The Haydens purchased Munchkin Michele at the age of 14 out of the 1998 Keeneland January sale for $27,000 while in foal to Gilded Time. The mare produced three foals at Dark Hollow, all winners, the last four-time stakes-placed Bamba.
A daughter of Not For Love, Bamba proved a prolific producer – all seven foals bred by the Haydens started and won, including Maryland Million Classic runner-up, 12-time winner and $407,013-earner Southside Warrior, and the Pure Prize filly Plum.
Campaigned by the Haydens, Plum won three of four starts at 2, including the Maryland Juvenile Filly Championship Stakes, and was stakes-placed at 3. Retired to the Dark Hollow Farm broodmare band, Plum has produced six named foals. Of her four to start, three are winners, including the Dark Hollow Farm campaigned Toy (2017, by Tapizar), an allowance winner of $115,500. The mare’s current 2-year-old, a Twirling Candy colt, sold for $115,000 at the Fasig-Tipton Midlantic fall yearling sale; her yearling is a May 4 filly by Unified. Plum was not bred for this year.