It may not have been as easy as most bettors expected, but odds-on favorite Divine Huntress got the job done in the $75,000 Miss Disco Stakes, for Maryland-bred/Maryland-sired 3-year-old fillies, at Laurel Park on July 30.

The bay daughter of Divining Rod made waves over the winter with two impressive victories at Parx Racing, including a first-level allowance by 12 3/4 lengths. Sent out in graded stakes her next four starts, she was well-beaten at the Fair Grounds in February; finished fifth at Aqueduct in the Gazelle-G3 and fourth in Pimlico’s George E. Mitchell Black-Eyed Susan Stakes-G2, beaten approximately five lengths in both; then proved tough when second in the Acorn Stakes-G1 at Belmont Park, while no match for the winner, Matareya.

Making her first start at Laurel since her 2-year-old debut last November where she was third, Divine Huntress cut back to seven furlongs and dropped to restricted stakes company. She took lots of money throughout the wagering and went off at 3-5.

Breaking from the outside post position in the five-horse field, Victor Carrasco rated Divine Huntress off the pace. As they rounded the turn, she was sitting in second, just a length or so off the lead, and looked ready to roll by early leader Little Bit of That. 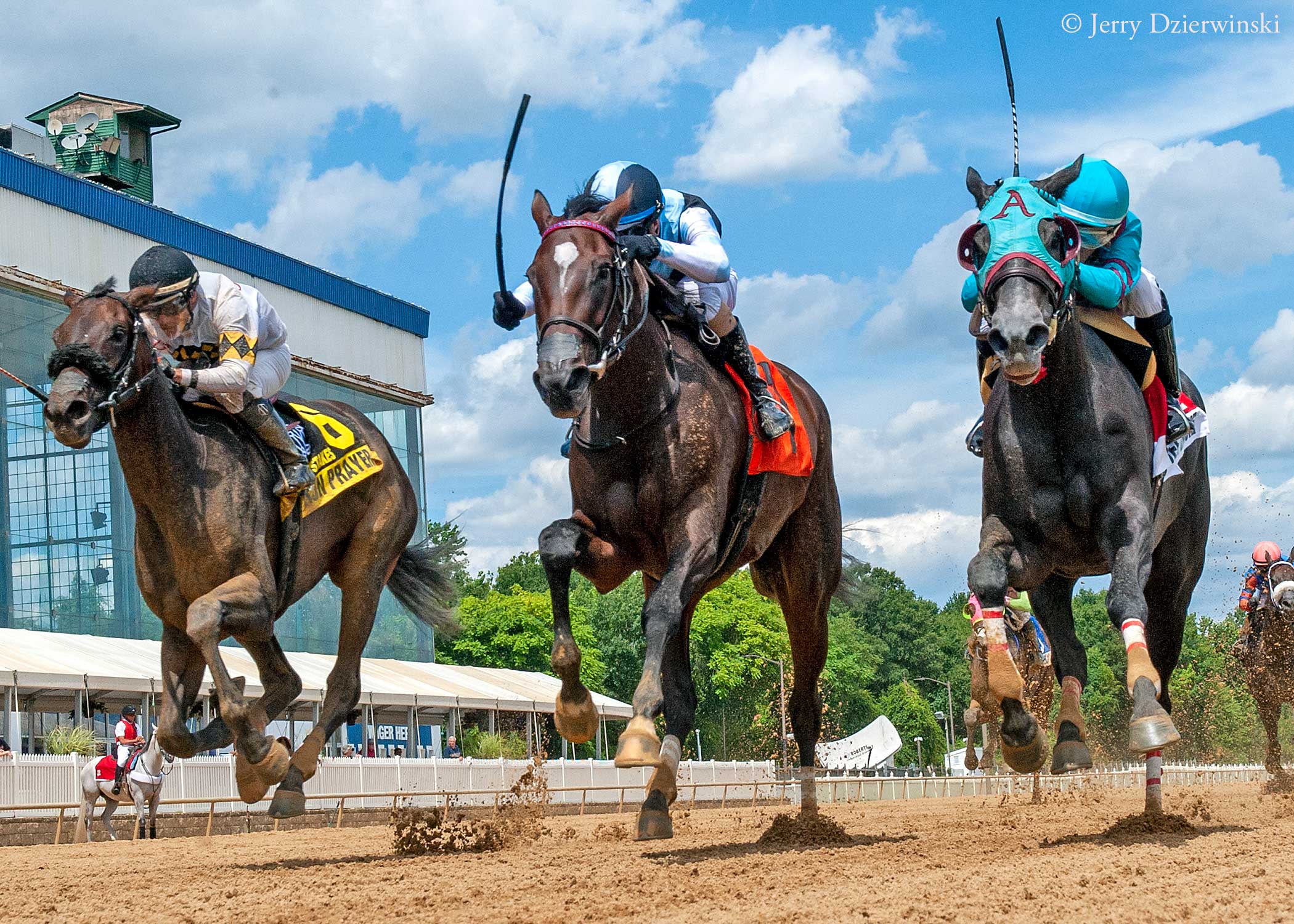 As they passed the eighth pole, Divine Huntress struck the front, but immediately encountered a fresh set of challenges as 16-1 longshot Sweet Gracie made a move up the inside, while Petition Prayer quickly gained ground in the center of the track. Divine Huntress dug in gamely and held on to win by a nose. Sweet Gracie was second by a neck over Petition Prayer. The final time for seven furlongs was 1:24.23.

Divine Huntress has now won three times from eight starts, with career earnings of $230,490. She’s owned by Eclipse Thoroughbred Partners and Long Valley Stables LLC, and was bred by Dr. and Mrs. Thomas Bowman, Rick L. Buckley and Joshua Dreiband. Buckley trained the filly for himself, Dreiband and four minority partners under the Long Valley Stables banner until they sold a majority interest to Eclipse Thoroughbred Partners after her maiden-breaking win on Dec. 13.

Divine Huntress is Thrill Seeker’s fifth foal, third winner and first stakes winner. She was offered at the Fasig-Tipton Midlantic Eastern Fall Yearling Sale in 2020 and exited a $16,000 RNA.

Divining Rod stands at Country Life Farm in Bel Air. Divine Huntress is the third stakes winner from his first crop this year, joining Local Motive and Climber. The Miss Disco third-place finisher Petition Prayer is also a daughter of the 10-year-old son of Tapit, who stood the 2022 season for $5,000 live foal.