An eight and a half-month layoff proved no deterrent for Vance Scholars on Saturday, Aug. 6, when he won his 3-year-old debut in the $100,000 Bald Eagle Derby at Laurel Park by two and a half lengths in a 12-1 upset.

The chestnut son of Holy Boss showed some promise as a 2-year-old, with two victories from five races. In his last start of the season he won a first-level allowance by a half-length at Laurel on Nov. 21. Not long after he was sidelined by a condylar fracture and did not return to the worktab until May 19.

Trainer Dale Capuano made sure he was well-prepared for his return, starting him off with a three-furlong drill and gradually building up to a seven-furlong workout at Laurel on July 21. He worked five furlongs on the turf on July 31 in preparation for his grass debut in the Bald Eagle Derby, which was originally scheduled at a mile and three-sixteenths on the lawn. However, a series of thunderstorms Thursday and Friday night caused the race to be switched to the main track.

Breaking from post five in the six-horse field, Vance Scholars began well and benefited from a heads-up ride from Jorge Ruiz. Sensing that the track was playing in favor of inside speed horses, Ruiz sent his mount after the early lead, and established a clear advantage on the rail by the time they hit the first turn. Vance Scholars cruised through early fractions of :24.78, :49.63 and 1:14.51 with minimal pressure. 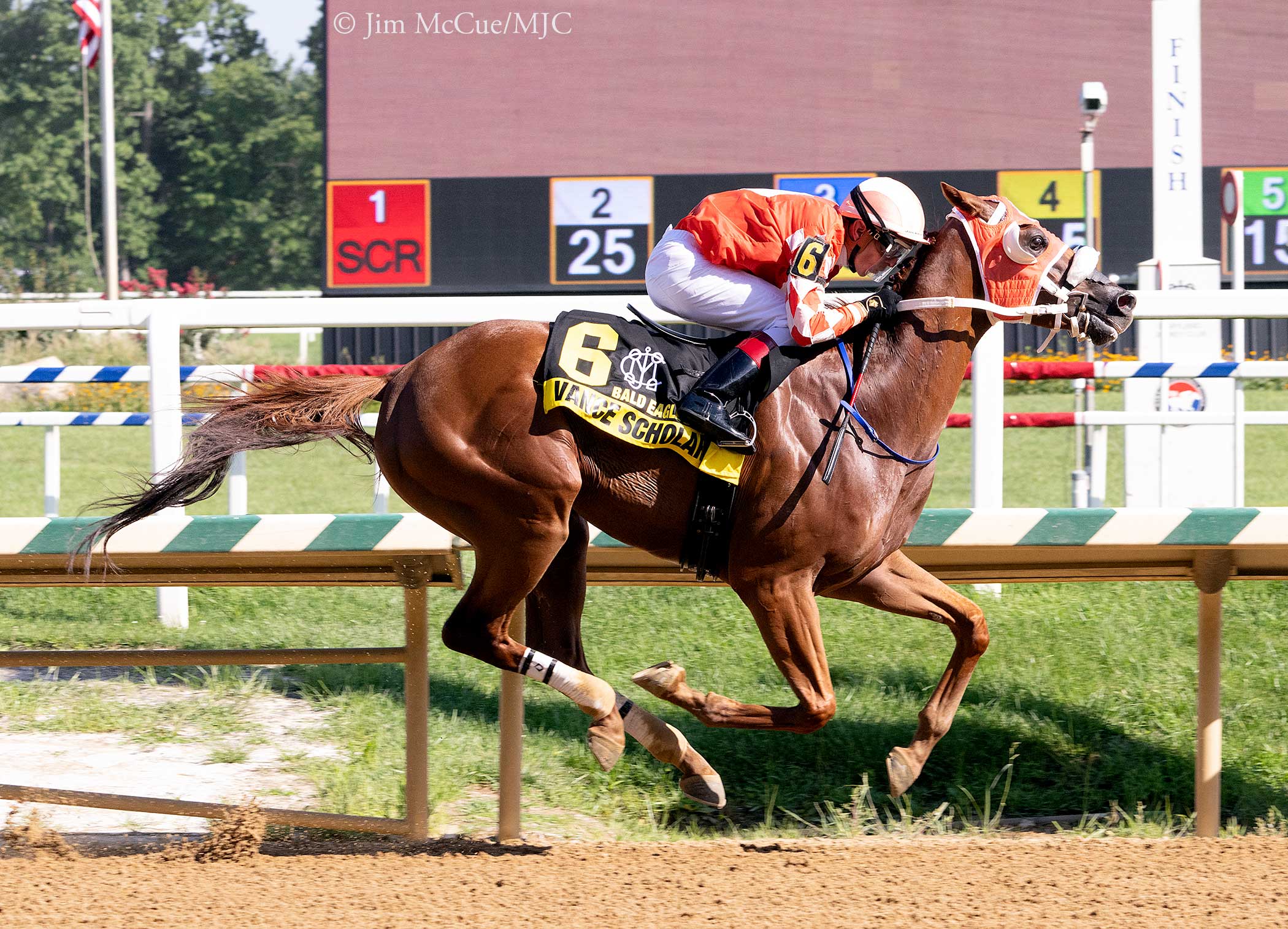 As they moved into the far turn, Undercover Kitty, winner of the off-the-turf Crowd Pleaser Stakes at Parx Racing two starts back, drew alongside Vance Scholars. The two turned for home together, but Vance Scholars benefited from racing on the favorable part of track. He shook off Undercover Kitty and pulled clear in the last eighth-mile for the victory. The final time over a fast main track was 1:58.29.

Vance Scholars is owned by Steven T. Newby, who purchased him for $22,000 at the Fasig-Tipton Midlantic Eastern Fall Yearling Sale in 2020. Newby named the gelding for a scholarship program he established at Archbishop Carroll High School in Washington, D.C., which in turn was named for 19-time Emmy Award-winning newscaster Jim Vance, who died in 2017 at the age of 75 after a brief battle with cancer.

The Bald Eagle marks Newby’s second stakes win at Laurel in as many weeks – he also owns Justwaveandsmile, winner of the Ben’s Cat Stakes on July 30. Vance Scholars has won three times from six starts, with career earnings of $130,530.

Bred by Anchor & Hope Farm in Port Deposit, Vance Scholars is the first stakes winner for Anchor & Hope stallion Holy Boss. He’s the eighth named foal for the 20-year-old Cat Thief mare Passionate Dancer, who earlier produced stakes winners Reflector (by Ready’s Image), winner of the 2015 Need For Speed Stakes at Evangeline Downs and 2017 G.C.F.A. Texas Bred Stakes at the Gillespie County Fair, and Fast Pass, a son of Successful Appeal who won the 2019 Opening Lead Sakes at Gulfstream Park and is graded stakes-placed. Both horses earned just shy of $300,000 in their careers. Her first runner, a 2009 Songandaprayer colt named Ojos de Hielo, was multiple Group 1 stakes-placed in Panama before returning to the U.S. and just missing a stakes win when second, by a neck, at Lone Star Park.

Overall, Passionate Dancer has seven starters and six winners from 10 foals. Her last reported foal is a 2-year-old filly by Anchor & Hope’s first-year stallion Long River named Connie’s Dance, who has been working steadily at Laurel since the end of June but has yet to start.