Fille d'Esprit rides rail to victory in Seeking the Pearl

Better gate behavior and a rail-skimming ride proved the difference for Fille d’Esprit in the Seeking the Pearl Stakes at Colonial Downs on Tues, Aug. 16, as she scored by one and one-quarter lengths for her third stakes win of the year.

Prior to the Alma North Stakes on July 16, Fille d’Esprit was in prime form. The 6-year-old bay mare had finished first or second in her prior four races, including victories in the Conniver Stakes and Susquehanna Valley Stakes. She went off as the 2-1 second choice in the Alma North, but lost all chance when she caused a ruckus in the starting gate, causing her to be backed out and reloaded. Once the running started, she had nothing in the tank, and was eased under the wire. 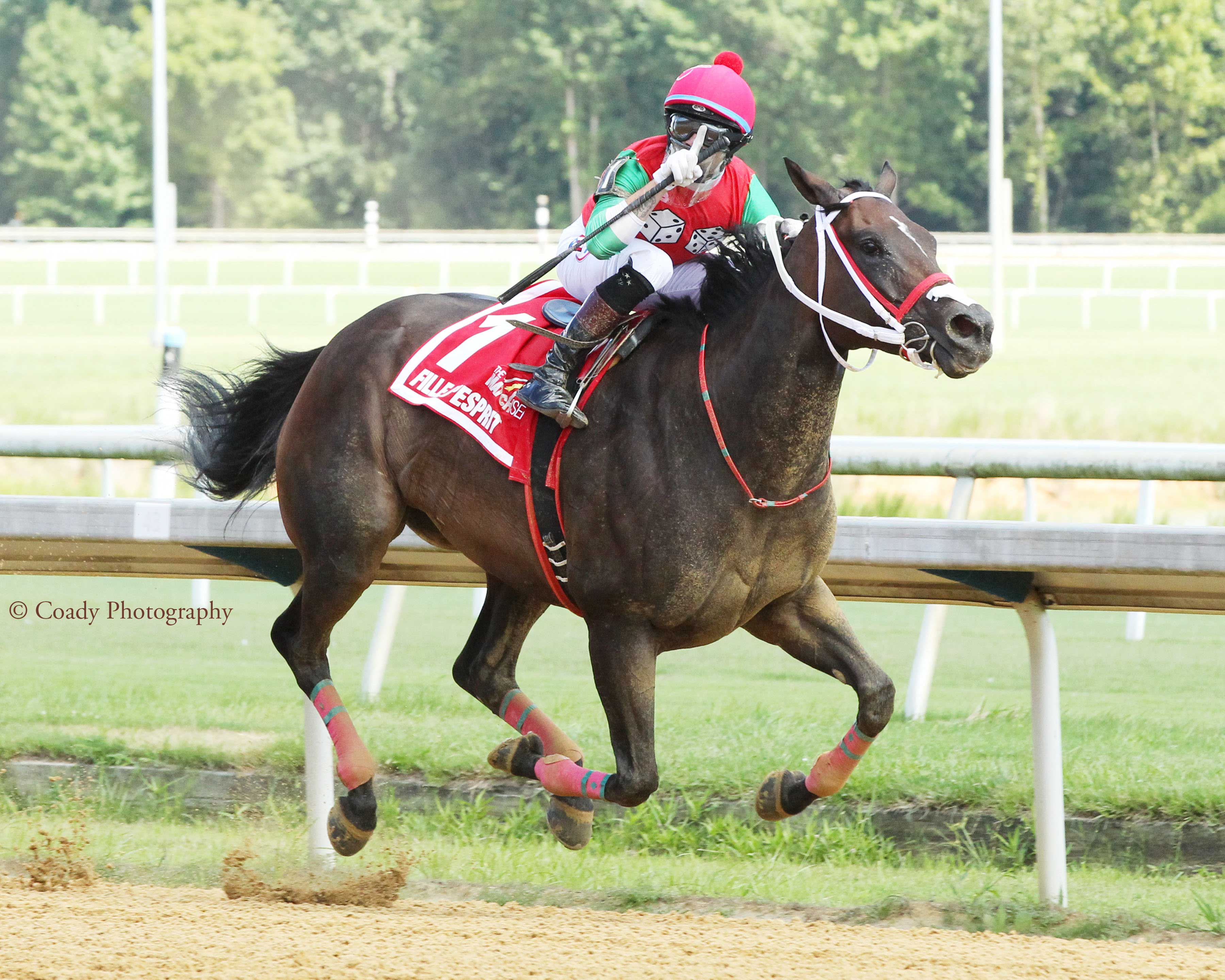 Undeterred, trainer Jerry Robb worked her on Aug. 11, going four furlongs in a sharp :48.00. That move inspired him to take another shot in the Seeking the Pearl, a field that included undefeated graded stakes winner Carribean Caper and 2022 stakes winners Kalypso, Cheetara (Chi), and fellow Maryland-bred Edie Meeny Miny Mo. Perhaps a bit spooked by that last race, bettors sent Fille d’Esprit off at nearly 7-1 in the eight-horse field.

Under regular rider Xavier Perez, Fille d’Esprit broke on top from the inside post, but was relaxed off the pace and let four rivals duel through a first quarter of :22.15 and an opening half in :44.97. As they rounded the far turn, Edie Meeny Miny Mo, who set the pace on the rail, backed up quickly, and caused Fille d’Esprit to check. She quickly set herself and continued to draft off the pace on the rail while Perez decided on a course of action.

When the field turned for home, a hole opened up on the inside, and Perez moved Fille d’Esprit through it. She pulled clear in the last eighth and withstood a mild late move from Kalypso to win it. The final time for seven furlongs was 1:22.43.

Fille d’Esprit is co-owned by Robb and his wife Gina, under the nom de course No Guts No Glory Farm, along with C J I Phoenix Group. She’s won 10 races lifetime from 19 starts and has earned over $439,226, more than half this year.

The Seeking the Pearl was part of the Mid-Atlantic Thoroughbred Championship Series (MATCH). With this win, Fille d’Esprit now has 22 points, placing her in a tie with Kaylasaurus (who scratched from the race) for the filly and mare sprint division lead.

A daughter of Great Notion, Fille d’Esprit is the first foal out of Sweet Valor, who has two winners from two starters. Fille d’Esprit’s half-sister Sweet Asta, by Nicanor, has one career win from 17 starts and is placed this year. Sweet Valor has also produced an unraced 3-year-old colt  by Editorial named Sweet Syntax, a No Never No More yearling filly named Never More Valor, and a 2022 filly by Blofeld named Cross of Valor. She was bred to Blofeld again for 2023.