Alottahope does it again in Robert Hilton Memorial

Off a flashy win in the Star de Naskra Stakes at Laurel Park in July, Alottahope received a class test in the $250,000 Robert Hilton Memorial Stakes at Charles Town on Friday, Aug. 26. He passed with flying colors with a two and three-quarter-length win.

Alottahope made waves in the Star de Naskra, defeating a field of Maryland-breds by 15 lengths for his first stakes victory. Although he was unplaced in three prior stakes tries against open company, trainer Jerry Robb decided to take another shot in the seven-furlong Hilton for 3-year-olds. He faced a wide-open field which included stakes winners Old Homestead, Double Thunder, El Pando, Buff Hello, and Strong Eagle, plus graded stakes-placed Of a Revolution. Alottahope went off as the 2.30-1 second choice, while Of a Revolution was the slight 2.10-1 favorite in the 10-horse field. 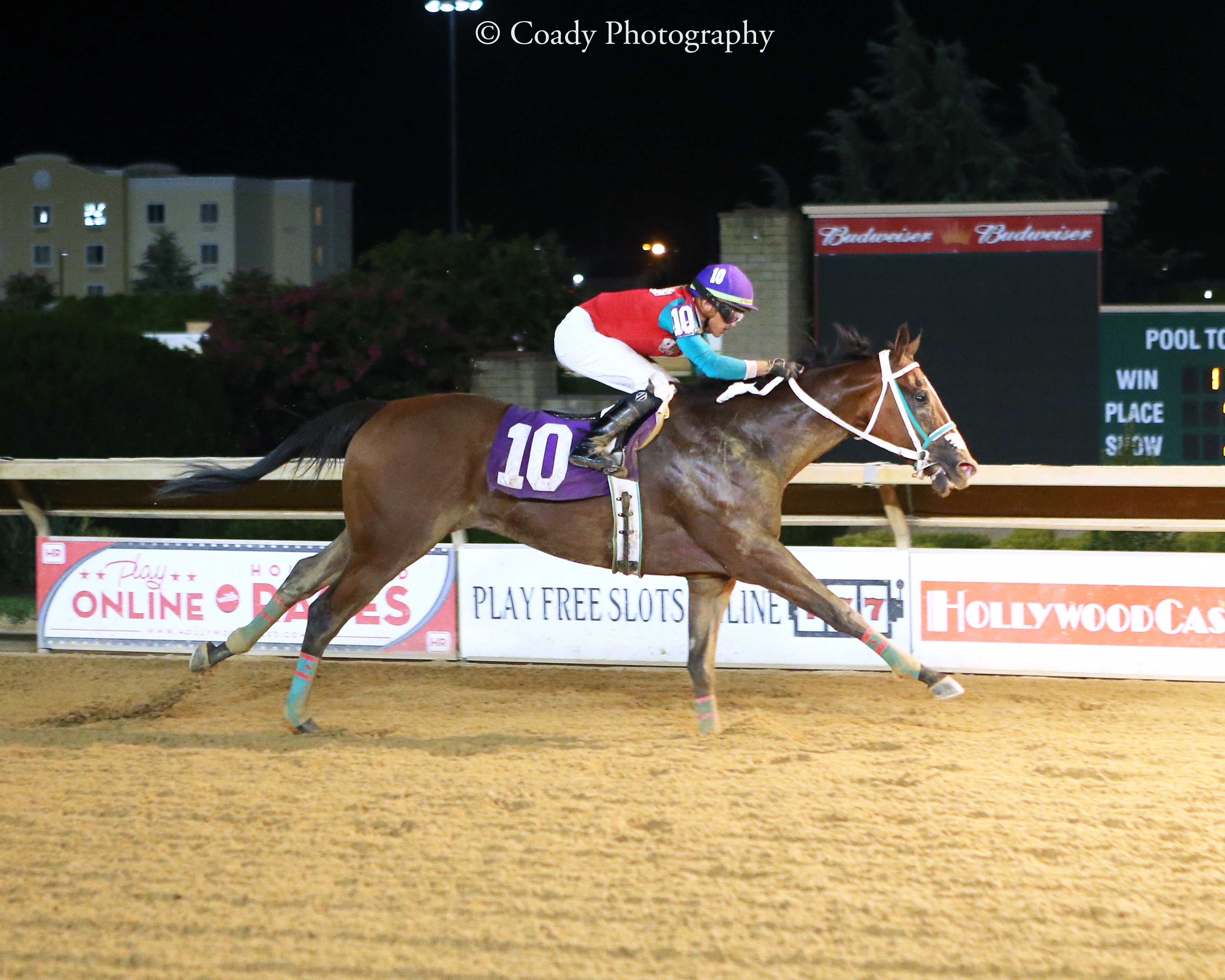 Alottahope caught a break earlier in the day when Local Motive was scratched, enabling fellow Robb trainee Al Loves Josie to draw in off the also-eligible list. Off a third-place effort in the Star de Naskra, Al Loves Josie acted as a rabbit for his more highly-regarded stablemate. Under Xavier Perez, he blasted to the front from the outside post position, crossed to the rail and had the lead by the time they hit the first of two turns. Meanwhile, Alottahope, with Jevian Toledo aboard, was rated in mid-pack a few lengths off the lead.

As they moved up the backstretch on the three-quarter-mile bullring oval, Al Loves Josie set an opening quarter of :23.16 and a half in :46.26. Old Homestead and Of a Revolution chased the leader but could not keep up, tiring them out and setting the table for Alottahope. With just over an eighth of a mile to go, Toledo angled Alottahope into the three-path and took aim on the lead. He took control easily, and although Of a Revolution gave chase in the lane, he was no match for Alottahope. Of a Revolution held second, while local longshot Jungle Beast finished third at 43-1. The final time was 1:24.59.

Alottahope has won five times from 10 starts, with earnings of $323,915. Bred by Dr. and Mrs. Thomas Bowman and Dr. Brooke Bowman, Alottahope is owned by No Guts No Glory Farm, the nom de course of Jerry Robb and his wife, Gina. He’s sired by Editorial, a half-brother to top racehorse and stallion Uncle Mo, who stood the past two seasons at Anchor & Hope Farm in Port Deposit, but recently left Maryland to stand at stud in California in 2023. Editorial is also the sire of recent stakes winner My Thoughts.

Alottahope is out of the Midnight Lute mare Alottalute, who has also produced two-time Maryland-bred champion Street Lute (by Street Magician), an eight-time stakes winner with earnings of $617,520. Street Lute’s full sister, Mama’s Eyes, is scheduled to make her career debut on Friday, Sept. 2 at Timonium.