Include was bred and campaigned by one of Maryland’s all-time leading breeders, Robert Meyerhoff, whose famed stable included such greats as Maryland Thoroughbred Hall of Famers Concern and Broad Brush, the latter the sire of Include. His dam, Illeria, was purchased by Meyerhoff for $350,000 at the Keeneland November Breeding Stock Sale in 1994 while carrying her first foal. She went on to produce nine stakes performers: Magic Broad, a full sister to Include who won the 1998 Selima Stakes-G3 at Laurel Park and was named Maryland-bred champion 2-year-old filly of 1998, along with listed stakes winners Encaustic, Broad Rule and Magical Broad (all by Broad Brush) and stakes-placed Loaded Brush, Invent, Implicit and Officer’s Holiday. Illeria was Maryland’s Broodmare of the Year in 2001, the year Include took Maryland-bred Horse of the Year and champion older male honors.

Trained by Grover “Bud” Delp throughout his 20-race career, Include made his freshman debut at Monmouth Park on Aug. 28, 1999, and finished fourth, beaten eight and three-quarter lengths, in a maiden special weight at odds of 43-1. A third-place finish a month later at the Meadowlands ended his freshman season.

When Include returned to the races nine months later, he was a monster. In a seven-furlong maiden special weight at Laurel on June 25, 2000, he romped by nine and a half lengths. Over a 12-month span the blaze-faced bay accounted for nine wins in 10 starts. He capped a four-race win streak with his first stakes victory in the Vincent A. Moscarelli Stakes at Delaware Park that August. After finishing off-the-board as the favorite in the Pennsylvania Derby-G3 at Philadelphia Park he was put away for the season. 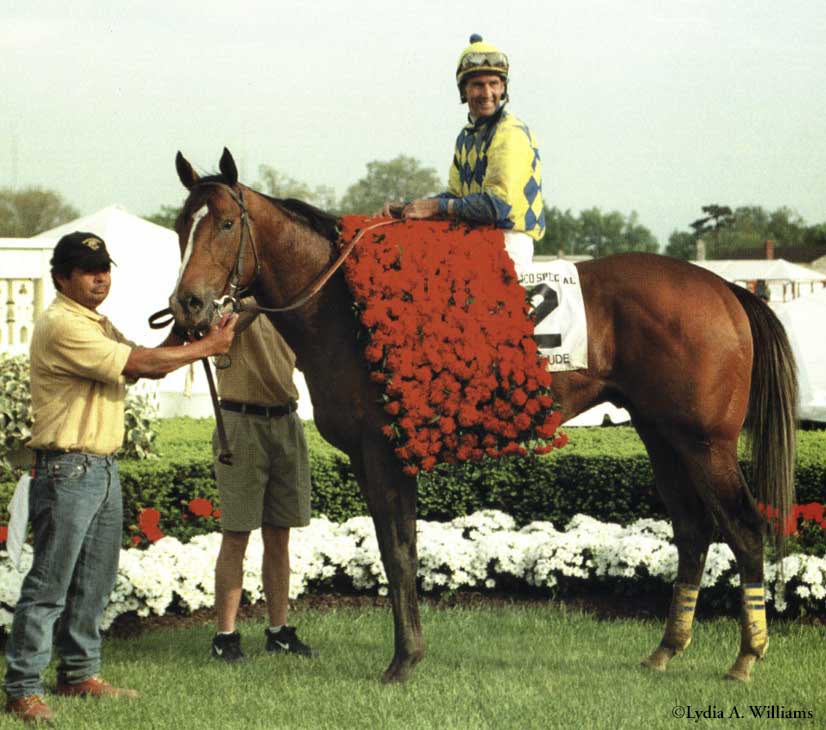 Include blossomed at 4. He won five stakes in a row to start his 2001 campaign, including three graded. His biggest victory came in the 2001 Pimlico Special Handicap-G1, which he won by a neck over odds-on favorite Albert the Great. He was the fourth Maryland-bred to win the historic Special in its 36 runnings, joining Challedon (1939, 40), Vertex (1958) and Cigar (1995). His other wins included the New Orleans Handicap-G2 at Fair Grounds and the Massachusetts Handicap-G2 at Suffolk Downs. Later in the year, he placed in three graded stakes, highlighted by close finishes in the Grade 2 Clark at Churchill Downs (second by a neck) and Grade 2 Meadowlands Cup Handicap (third in a three-horse photo).

Include won the Jennings Handicap at Pimlico to start his 5-year-old season but didn’t return to his previous year’s form. He retired with 10 wins, a second and four thirds, for earnings of $1,659,560, which ranked him seventh all-time among Maryland-breds, just ahead of another Meyerhoff-bred, Valley Crossing.

Include entered stud at Airdrie in 2003, and stood there until pensioned in 2021. He enjoyed instant success as a stallion, producing multiple Grade 1-winning millionaire Panty Raid, a graded stakes winner on dirt, turf, and synthetic surfaces, in his first crop. His other notable progeny include Grade 1 winners Include Betty, Her Smile, Cash Included and Include Me Out, Oklahoma-bred millionaire She’s All In, and multiple graded stakes winners Sconsin and Redeemed. A shuttle stallion to Argentina for a number of years, he sired champions Sobradora Inc (Arg), Sociologa Inc and Samba Inc (Arg). In total, Include has 799 winners to date from 17 crops of racing age, and 66 stakes winners, 24 which are graded winners. His progeny have earned more than $63 million worldwide.