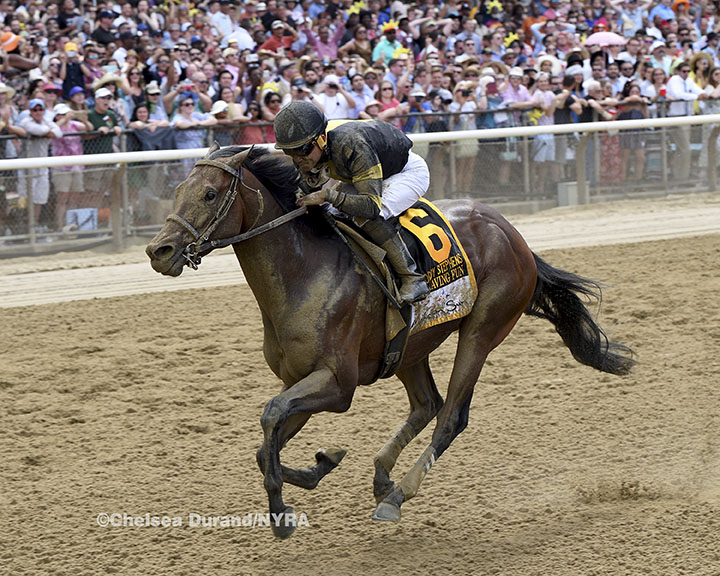 Owned by Gary Barber, Wachtel Stable and Jim Scott’s Terp Racing, Still Having Fun had shown an affinity for one-turn racing through seven career starts, never finishing worse than second at a mile or less, but his victory still came as a surprise to bettors, who let him go off at odds of 13-1.

The son of Old Fashioned lagged behind the field early, with only one horse beaten entering the turn, as Promises Fulfilled and World of Trouble traded blows through torrid fractions of 21.46 seconds for the opening quarter-mile and :43.68 for the half. The intrepid pacesetters continued their race-long duel as the field turned for home, while jockey Joel Rosario angled Still Having Fun out to the center of the track for clear sailing.

With a full head of steam, Still Having Fun rolled down the crest of the Belmont Park stretch to prevail by 1¼ lengths and complete the seven furlongs in 1:21.45.

Still Having Fun won the Frank Whiteley Jr. and Miracle Wood Stakes at Laurel Park in his first two starts of the year before finishing unplaced in two attempts beyond a mile. With his fourth victory in eight starts, he has now earned $431,703.

Still Having Fun was bred by Charles and Cynthia McGinnes in partnership with Keefe, who had trained the colt’s dam Casual Kiss, a daughter of champion Dehere bred by the McGinneses. Casual Kiss was sold by the McGinneses as a yearling for $20,000 in 2009 and joined Keefe’s stable for owner Arnold Heft, but was injured before she ever started. Heft, in his 90s and in failing health, sought to find a home for his unraced filly and Keefe turned to the McGinneses. “We told Tim we’d make him a co-breeder on her foals, and split the breeder bonuses,” said McGinnes.

Keefe purchased Still Having Fun for Terp Racing at the Fasig-Tipton Midlantic Fall Yearling sale for $12,000 out of the McGinnes’ Thornmar consignment. After a dominating debut victory at Laurel Park last November, Terp Racing sold a part-interest in the colt to Gary Barber and Wachtel Stable. His next start was his stakes debut, the Maryland Juvenile Futurity Dec. 9 at Laurel, which he lost by a neck. In his start leading up to the Woody Stephens, he finished second over the Pimlico slop in the Chick Lang Stakes on Preakness day. Read more