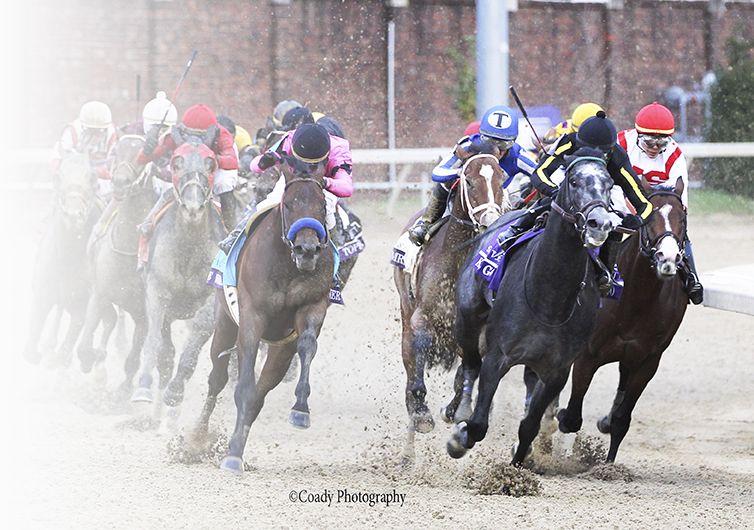 The “little horse that could,” trained by Ben Colebrook and bred by Angie and Sabrina Moore, led in the stretch before falling into second behind favorite Game Winner, who won by 2 1/4 lengths.

With a second place finish at 40-1 in the Breeders’ Cup Juvenile, along with his 70-1 win in Keeneland’s Breeders’ Futurity-G1 on Oct. 6, the colt has proven that the odds can’t bring him down.

Looking ahead, trainer Ben Colebrook says the Kentucky Jockey Club-G2 on Nov. 24 is possible for Knicks Go. An $87,000 yearling purchase by the Korean Racing Club last September, the colt sits second in the 2019 Kentucky Derby standings with 18 points. Typically, around 30 points secures a horse the chance to run in the Kentucky Derby in May.

Following his Breeder’s Cup run, Knicks Go’s five career starts include two firsts, a second, and a third with total earnings of $670,515.

Distant Shore, a 2-year-old colt by Algorithms out of Maryland-bred Glimpse (by Touch Gold), prompted the pace and held on for third in the $100,000 Street Sense Stakes on Friday, Nov. 2. Trained by Thomas Amoss and bred by Mr. and Mrs. Charles McGinnes, Distant Shore went off at 14-1.

In his previous two career starts, Distant Shore was victorious in a maiden special weight at Indiana Grand Race Course in August and finished second in the Arlington-Washington Futurity at Arlington in September, nearly five lengths clear of Knicks Go in third. His total career earnings are $42,900.

The colt was purchased by his current owner, Churchill Downs Racing Club, in the Fasig-Tipton Midlantic 2018 Two-Year-Olds in Training Sale for $50,000. He was sold by his breeders at the Midlantic Fall Yearling sale for $70,000.

Ruby Notion, a 5-year-old West Virginia-bred mare by Maryland sire Great Notion out of Modena Bay (NZ), landed herself fourth in the $1 million Breeders’ Cup Turf Sprint-G1 on Saturday, Nov. 3. One of two fillies in the field of 14, trained by Darrin Miller and bred and owned by Silverton Hill Farm LLC, Ruby Notion went off at nearly 20-1.

The filly boasts six wins out of 15 career starts, highlighted by victories in the Caress Stakes at Saratoga in July and the Kentucky Downs Ladies Sprint Stakes-G3 at Kentucky Downs in September. Her career earnings total $476,928.

Her sire, Great Notion, stands as Maryland’s 2018 leading stallion with progeny earnings of $3,327,712. Ruby Notion is currently his leading earner.