Money Fromheaven, owned by Make Family First Stable and trained by Hamilton Smith, made her first start in a stakes a triumphant one as she outran 9-5 favorite No Mo Lady to the wire to pull a 24-1 upset in the $100,000 Maryland Juvenile Filly Championship Stakes for 2-year-old Maryland-bred or sired fillies at Laurel Park on Dec. 8. 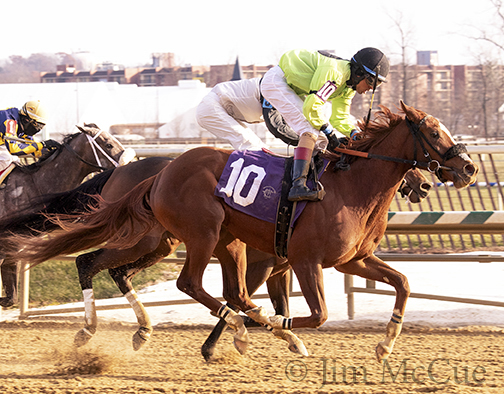 At one time more than 20 lengths behind pacesetter Questionoftheday, Money Fromheaven rallied down the stretch and matched strides with No Mo Lady late as they closed to the wire. The winning time was 1:24.18 for seven furlongs. Second-choice Belial, at one time last of nine and more than 25 lengths back, closed fast to finish a length back in third.

The Juvenile Filly Championship is Money Fromheaven’s second straight win, following her maiden score in her seventh start in October at Laurel Park.

By Munnings out of Smart Policy, Money Fromheaven improved her record to 2-1-3 in eight starts with $124,893 in total earnings. The filly is a half-sister to Rocky Policy (Rock Slide), winner of this year’s Jameela Stakes and second or third in three other stakes, including the 2014 Maryland Million Lassie.

Money Fromheaven was bred by Timothy J. Rooney, whose family has owned and operated Shamrock Farm in Woodbine for decades. The filly is the fifth foal out of the Shamrock Farm-bred mare Smart Policy (by Smart Strike) and her second stakes winner. Read more