Laki returns with success in the Bender Memorial

Hillside Equestrian Meadows’ Laki, returning from a break since his runner-up finish in the Frank J. De Francis Memorial Dash-G3 on Sept. 22, trumped the competition in a half-length win over runner-up Rockinn On Bye in the $75,000 Howard and Sondra Bender Memorial at Laurel Park on Dec. 8. Favorite Lewisfield, who set the early pace, finished third in the stakes for Maryland-bred and/or sired runners. 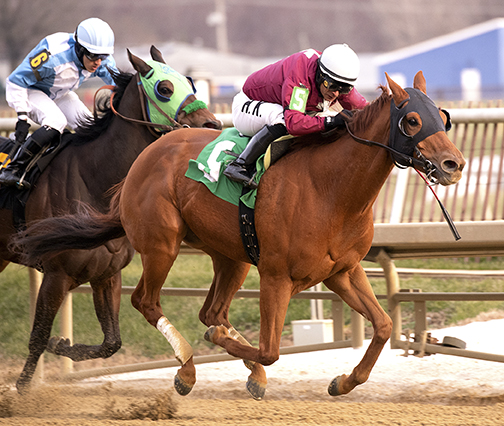 Laki’s final time of 1:07.99 came close to breaking Laurel’s track record of 1:07.95 for six furlongs, set by multiple graded-stakes winner Richter Scale on July 15, 2000. The 5-year-old gelding Laki achieved his third career stakes win and seventh win in 11 starts at Laurel (in four starts elsewhere, all stakes, his best finish is a third).

Trained by Damon Dilodovico, Laki won the seven-furlong Polynesian Stakes at Laurel Park in August and clinched top 3-year-old and up sprint division honors in the Mid-Atlantic Thoroughbred Championship Series (MATCH) following his performance in the De Francis.

In his fast paced Bender Memorial win, the Maryland-bred improved to 7-3-1 in 15 career starts with total earnings of $345,542.

From the first crop of Maryland Million Classic winner Cuba (a son of Not For Love), Laki was bred by Tom Michaels and Lorna Baker out of the Swear by Dixie mare Truthful Dutch. He is his sire’s first stakes winner and currently stands as his chief earning progeny.