Mavilus came from the clouds to win the $40,000 Maryland Million Distaff Starter Handicap by three and a half lengths at Laurel Park on Oct 22.
The 4-year-old daughter of Orientate went off as the 8-5 favorite in the field of 14 on the strength of seven consecutive top-three finishes against similar competition. She broke well in the seven-furlong handicap, but quickly dropped to the back of the pack. After a quarter of a mile she was 13th, 15 3/4 lengths off the early pace, and dropped 16 1/2 lengths out of it as they moved past the half-mile point.
Meanwhile up front, Unrequited Love and Sommer Velvet set solid early fractions, going through a first quarter in :22.52 and a half in :45.86. The pair raced well in front of the others as they entered the stretch, but Sommer Velvet began to give way and Unrequited Love kicked on. In the last eighth, under vigorous urging from Jorge Ruiz, Mavlius began to gobble up ground, going from 12th to second in a quarter-mile. Unrequited Love put up no resistance and Mavilus easily rolled by and drew off as she approached the wire. She covered the distance in 1:25.59. Startwithabang and Sheriff’s Kid also came from well off the pace to finish second and third, respectively. 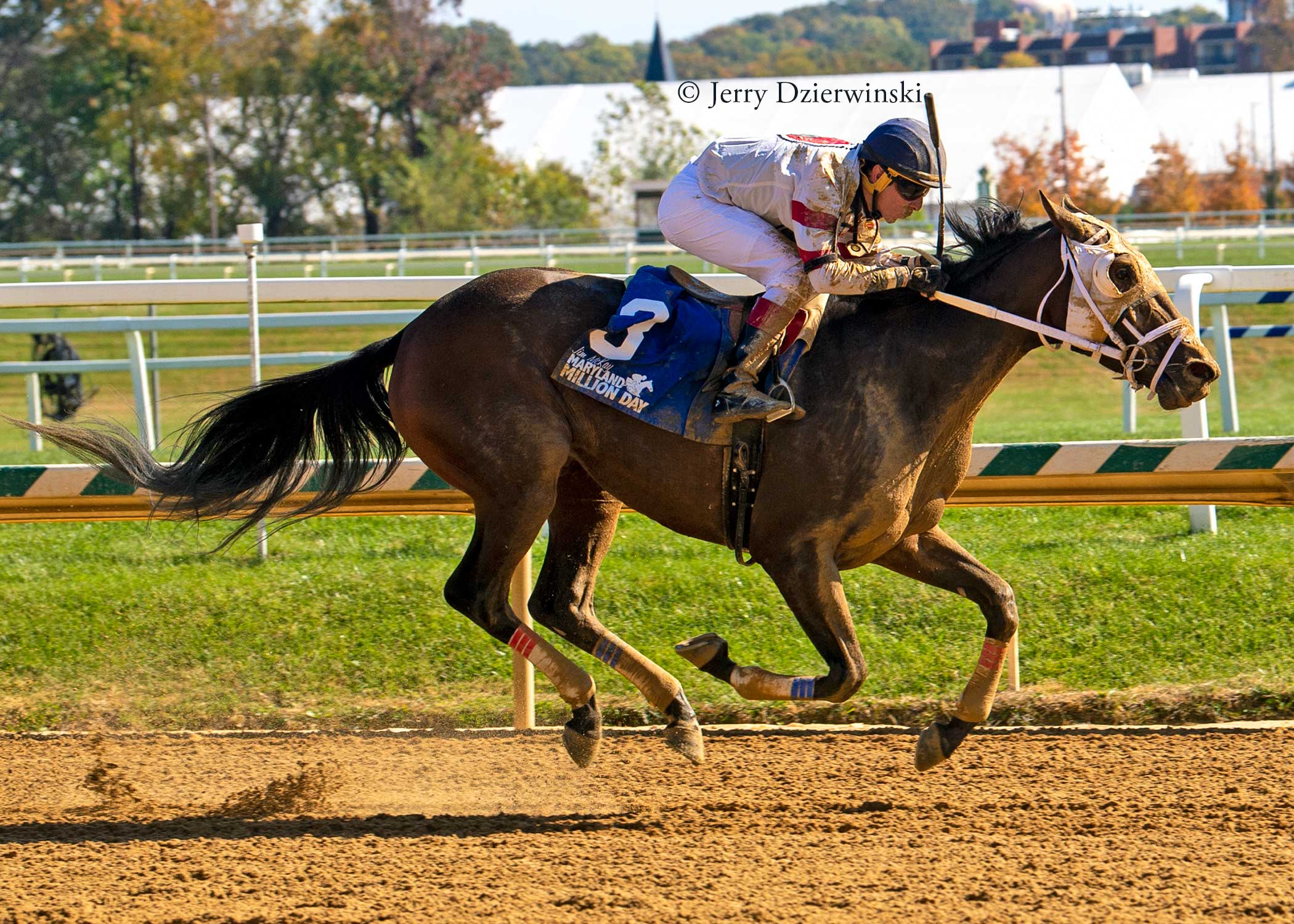 Mavilus has won seven times in her 33-start career, for earnings of $189,433. Originally campaigned by Anthony Pecoraro, she broke her maiden in her first start at Delaware Park in July 2020. She was claimed by Bird Mobberley LLC and trainer John Salzman Jr. for $25,000 in February 2021 at Laurel and won three times from 16 starts that year, earning $70,146. After finishing ninth of 13 in the 2021 edition of the Distaff Starter, she ran for a tag from $10,000 down to $5,000 in her next four starts, making her eligible for this year’s race. In January 2022 she was taken for $5,000 by current owner Michael Scheffres and trainer Carlos Mancilla. Since then, running primarily in starter allowances, she’s won three and been second or third seven times in 11 starts.
Mavilus’s sire Orientate, the Eclipse Award-winning sprinter of 2002, stood at Northview Stallion Station from 2013 until 2017, when he was pensioned. Mavilus, a member of his final crop, is his second Maryland Million winner, following Item in the 2016 Lassie.
The third Maryland Million winner for breeder Kevin Morgan (following 2019 scores by Mr. d’Angelo in the Turf and Yesterdaysplan in the Distaff Starter), Mavilus is the only starter of two foals out of the unraced Rock Slide mare Mavia (Rock Slide). She sold for $5,500 as a yearling to Pecoraro at the 2019 Fasig-Tipton Midlantic fall sale.