Larry Johnson and R.D.M. Racing Stable’s Sky’s Not Falling made up for lost time on Oct. 22 at Laurel Park, taking the $100,000 Maryland Million Turf Sprint in just his second start of the year.
A homebred for Johnson, Sky’s Not Falling broke his maiden on debut at Delaware Park in July 2020 and was stakes-placed four times in his 2-year-old season. As a 3-year-old in 2021, he won twice from nine starts and was stakes-placed twice, including a runner-up finish in last year’s Maryland Million Turf Sprint behind Grateful Bred. He was sidelined by shin splints at the start of this year and did not return to the worktab until mid-August. He returned to the races in the Laurel Dash Stakes at Pimlico on Sept. 24 and finished seventh, in a race designed as a prep for this spot.
Sky’s Not Falling got a new rider for the Turf Sprint. Regular jockey Victor Carrasco was injured in a spill on Friday and was unable to ride. Paco Lopez took over riding duties. 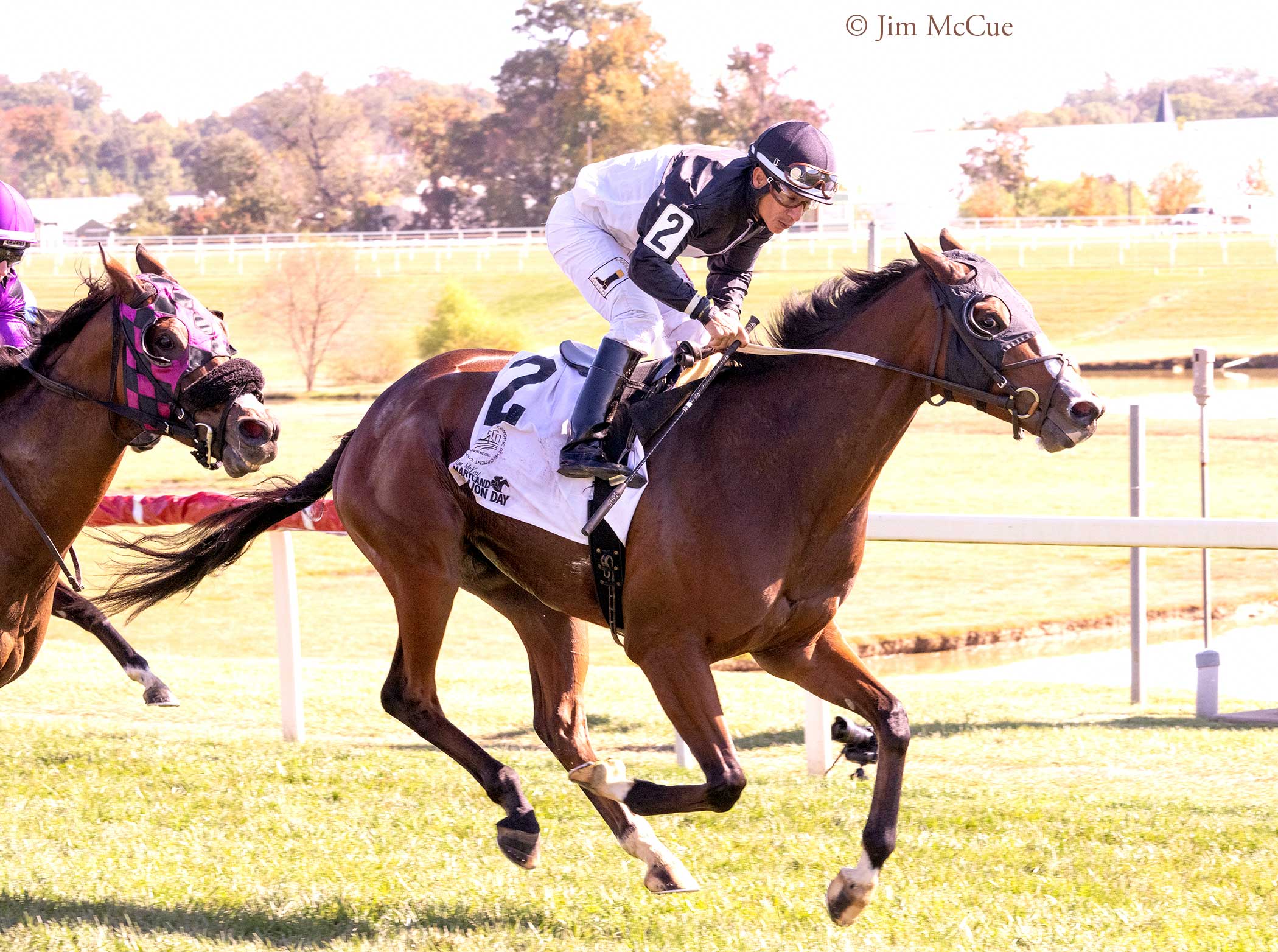 Defending champion Grateful Bred was 3-5 favorite in the eight-horse field, while Sky’s Not Falling went off as the 7-2 second choice. He broke well and was taken off the early pace by Lopez, while Cynergy’s Star and Boss Man J J dueled for the lead. Around the turn, Lopez moved Sky’s Not Falling off the rail and took his shot at the front.
As they came down the long stretch run, Sky’s Not Falling wrestled control of the lead as they moved past the eighth pole. Rock the Boat made a run at him late, but Sky’s Not Falling kept him at bay and won by a half-length, with Showtime Cat another one and three-quarter lengths back in third. Grateful Bred did not fire and finished fifth. The final time for five and a half furlongs over firm turf was 1:02.57.
The Turf Sprint was Trombetta’s 10th Maryland Million win, moving him into a tie for second place all-time with King Leatherbury. It was the second win for the partnership of Johnson and R.D.M. Racing Stables, following My Magician in the 2014 Lassie. Johnson also won the 2010 Lassie with Doing Great. It marked Lopez’s second Maryland Million win and was one of two for him on the day, as he won the Sprint later with Fortheluvofbourbon.
Sky’s Not Falling has now won four times in 17 starts, with earnings of $242,712. He’s from the final crop of Seville, who stood at Heritage Stallions before his passing in 2017. He’s out of the Sky Mesa mare Sky Copper, who has also produced stakes-placed runners Street Copper and Sky Magician, both by Street Magician. She produced a foal by McKinzie in 2022 and was bred back to him for 2023.