A pair of seven-figure mares headlined the Maryland-bred contingent at the star-studded Fasig-Tipton November Sale on Sunday, Nov. 6 in Lexington, Ky.
The Maryland-bred sales topper was Awesome Flower, who sold in foal to Gun Runner for $1,600,000 to Stonestreet Farm. The 13-year-old mare has so far produced two winners from four starters, by far her most notable multimillionaire Cyberknife, a 3-year-old son of Gun Runner. Cyberknife is a winner of three graded stakes this year, including Grade 1s in the Haskell and Arkansas Derby, and finished second against older horses in the Breeders’ Cup Dirt Mile-G1 at Keeneland on Nov. 5.
A daughter of Flower Alley out of the Awesome Again mare Formalities Aside, Awesome Flower was bred by Dr. and Mrs. Thomas Bowman, Milton P. Higgins III and Three Chimneys Farm LLC. Purchased by Arnold Heft for $45,000 at the Fasig-Tipton Midlantic Fall Yearling Sale in 2010, she originally raced in Maryland for Sylvia Heft and trainer Tim Keefe. In the fall of 2012, she was privately purchased by Frank Calabrese. She made one start for her new owner at Gulfstream Park in December 2012 before getting claimed for $30,000 by Kenneth and Sarah Ramsey and trainer Mike Maker. That claim paid massive dividends, as Awesome Flower went on to win six stakes races and earn $518,208 for her new connections. In total, she made 33 starts and won 11 races, for earnings of $556,593.
From the family of Dubai World Cup champion Well Armed, Awesome Flower is a half-sister to graded stakes-placed First Mondays, who is standing at stud at Northview Stallion Station in Chesapeake City, as well as stakes-placed If Not For Her and winner How My Heart Works, dam of 2020 Maryland Million Classic winner Monday Morning Qb. 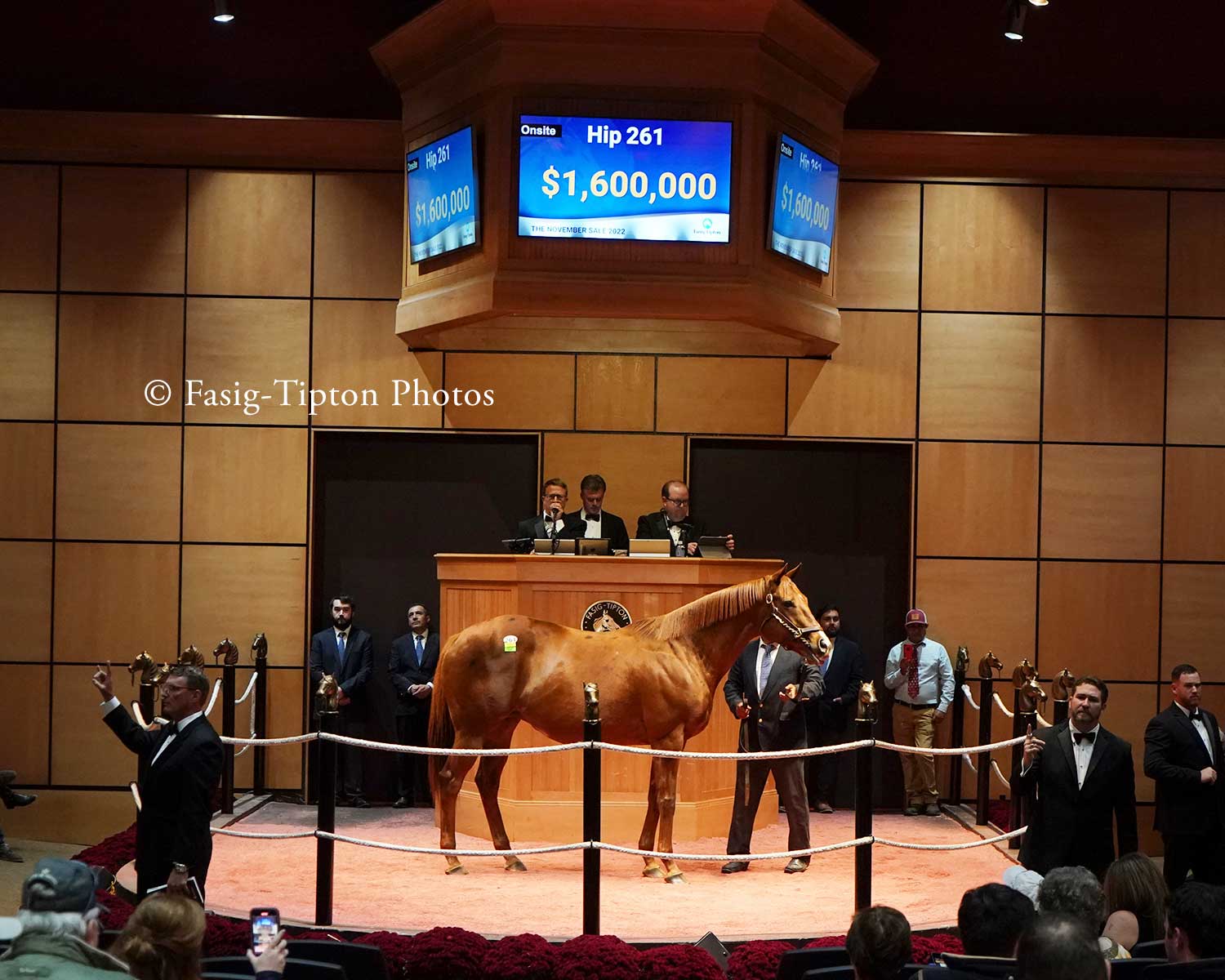 Awesome Flower has a weanling colt by Authentic who sold for $575,000 earlier in the day. Her last three foals to sell – the others yearlings Cyberknife and current 2-year-old Tapit Shoes (by Tapit) – totaled $1,275,000 in sales revenue.
Kentucky Oaks-G1 champion Cathryn Sophia, also in foal to Gun Runner, sold for $1,200,000 to Blandford Bloodstock. Bred by Bob Manfuso, Cathryn Sophia initially sold as a yearling for $30,000 at the 2014 Fasig-Tipton Midlantic Fall sale to Cash is King LLC, who campaigned her throughout her nine-race career. She won six races while never finishing worse than third, earning $1,229,720 in the process. A five-time stakes winner, she also captured the Forward Gal Stakes-G2 and Davona Dale Stakes-G2 at Gulfstream Park in 2016 and was three-times Grade 1-placed.
Cathryn Sophia has produced four foals, three of racing age. Her first foal and only starter, 4-year-old filly Mezcal, is a winner of $111,400. She has a 2-year-old colt by Into Mischief named Coalville and yearling colt by Curlin.
More Than Ready’s 5-year-old daughter Selflessly, a two-time graded stakes winner bred by George Louis Doetsch Jr. carrying her second foal (to the cover of Charlatan), was purchased by Barronstown Stud for $875,000.
Rich Love, a daughter of Not For Love and stakes winner Richetta bred by Bowman & Higgins Stable, and a producer of four winners from four starters, sold for $140,000 to Two Amigas in foal to champion Good Magic.
The Country Life Farm and Make Amends LLC partnership sold a weanling colt by Maclean’s Music out of Make Amends, by Malibu Moon, for $140,000 to Prego Bloodstock.
In total, five Maryland-breds sold for $3,955,000, for a $791,000 average and $875,000 median. The sales numbers represent an increase from last year, when four Maryland-breds sold for a combined $1,225,000.
The full results are available here