Alwaysinahurry broke through for the first stakes win of his 4-year-old season on Friday, Nov. 25, when he won the Howard and Sondra Bender Memorial Stakes for Maryland-bred/Maryland-sired sprinters at Laurel Park.
Making his first start since a third-place performance in the Maryland Million Sprint on Oct. 22, Alwaysinahurry broke well in the field of six and rated mid-pack in the early stages of the seven-furlong contest. Going to the Lead set the pace on the rail, while Tappin Cat sat to his outside. The pair engaged through a first quarter in :23.36 and went the half in :46.20 as favorite Monday Morning Qb joined the fray.
Entering the stretch, Alwaysinahurry moved to challenge the leaders, and struck the front as they hit the top of the stretch. The early leaders quickly faded, but Alwaysinahurry soon encountered a new challenge in the form of One Ten, who made a wide move on the turn and had Alwaysinahurry in his sights. One Ten looked ready to go by, but Alwaysinahurry dug in and fought back gamely. In the last sixteenth, Alwaysinahurry dismissed One Ten’s challenge and crossed the wire one and a half lengths in front. The final time for seven furlongs was 1:23.85. 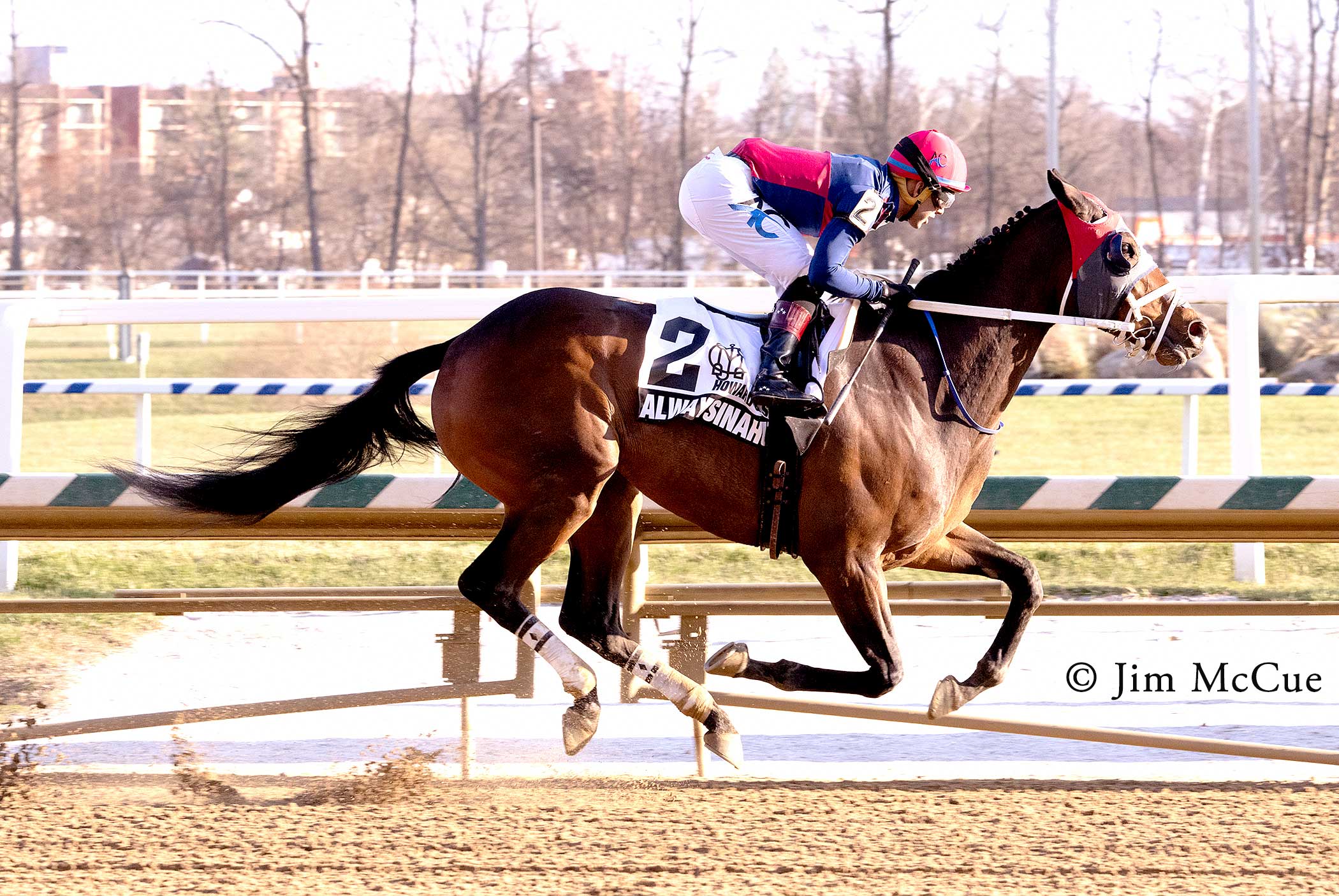 The 4-year-old gelded son of Northview stallion Great Notion trained by Dale Capuano secured his second win of the year from seven starts, his fifth career victory in 19 attempts, and upped his career earnings to $299,232. He became the sixth stakes winner for Great Notion this year, and was the first of two on the card as Fille d’Esprit won the Politely Stakes one race later. Great Notion is currently the leading stallion in the Mid-Atlantic region, with 59 winners and more than $4.2 million in earnings.
Alwaysinahurry was bred by Dr. and Mrs. Thomas Bowman, Quin Bowman and Rebecca Davis. He sold for $70,000 at the Fasig-Tipton Midlantic Fall Yearling Sale in 2019 to Mopo Racing, who has campaigned him throughout his career. As a 2-year-old in 2020, Alwaysinahurry won twice from eight starts and earned $98,272. He finished second in the Maryland Million Nursery that year behind fellow Capuano trainee Kenny Had a Notion.
In the second start of his 3-year-old season, Alwaysinahurry earned his first stakes victory when he won the Concern Stakes at Pimlico on July 4. Following a second-place finish in the Star de Naskra Stakes at Pimlico on Aug. 21, he went to the sidelines, and returned to the races at Delaware Park on June 10 of this year. His other win this year came on Sept. 18, when he upset graded stakes winner Wondrwherecraigis in an allowance sprint at Pimlico.
Alwaysinahurry is the last of 11 foals for his dam Otherwise Perfect, an unraced daughter of Lemon Drop Kid. Otherwise Perfect produced eight winners, including stakes winners Clubman and I Stand Alone, graded stakes-placed Friscan and stakes-placed Stonebriar.