Fille d’Esprit earned her fifth stakes victory of the year on Friday, Nov. 25, when she won the Politely Stakes at Laurel Park by five and three-quarter lengths.
The 6-year-old mare entered the six-furlong event with impressive credentials. In her most recent start, she won the Maryland Million Distaff on Oct. 22 by one and a quarter lengths. Earlier this year, she captured the Seeking the Pearl at Colonial Downs in August, the Susquehanna Valley at Penn National in June and the Conniver at Laurel in March, the latter by eight lengths. She earned her first black-type with a third in the Grade 3 Barbara Fritchie Stakes in February.
Facing a field of four rivals in the Politely, she went off the overwhelming 3-5 favorite in the stakes for Maryland-bred or sired fillies and mares. Breaking from the outside post position, Fille d’Esprit began alertly but was taken back under Xavier Perez and rated off the pace set by Targe and Paisley Singing. As they moved around the far turn after an opening quarter mile in :22.63, Perez asked Fille d’Esprit to run. She responded in kind, effortlessly moving up alongside the leaders and taking control as they hit the top of the stretch. In the lane, Perez roused Fille d’Esprit a little bit, but she quickly opened up and pulled away for an impressive victory over Juror Number Four. The final time for six furlongs was 1:10.77. 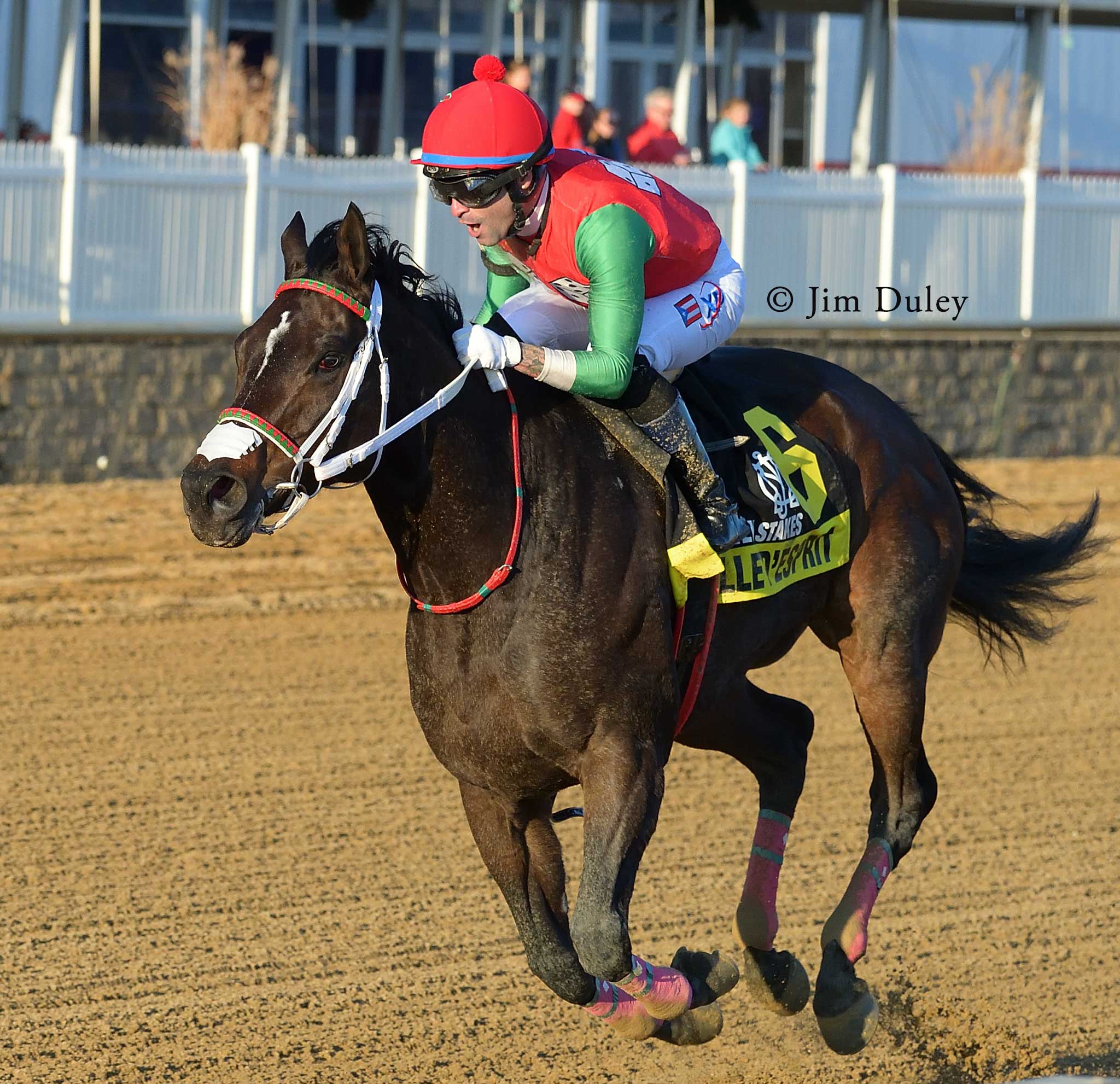 With her latest score, Fille d’Esprit improved her career record to 12-5-2 from 23 starts, for career earnings of $598,381. This season she’s run exclusively in stakes, with five wins and five placings in 12 starts. Originally campaigned by her breeders, Sweet Spirits Stables, LLC, she was claimed for $10,000 by C J I Phoenix Group and No Guts No Glory Farm in August 2020, and has raced for them, under the care of trainer Jerry Robb, ever since.
Fille d’Esprit is by Northview stallion Great Notion, the sire of two stakes winners on the card when Alwaysinahurry captured the Howard and Sondra Bender Memorial Stakes one race earlier. Great Notion is on pace to lead Maryland stallions for the fifth consecutive year, with 59 winners and more than $4.2 million in earnings.
Fille d’Esprit is the first foal out of her dam, Sweet Valor (by No Armistice), who has produced two starters and two winners from three foals of racing age. She also has a yearling filly named Never More Valor, by No Never No More, and a weanling daughter of Blofeld named Cross of Valor. She was bred back to Blofeld for 2023.