Multiple stakes-placed 2-year-old Heldish headlined the Maryland-bred contingent at the Fasig-Tipton Midlantic December Mixed and Horses of Racing Age Sale, held at Timonium on Tuesday, Dec. 6.
Heldish, one of two six-figure Maryland-breds at this year’s sale, sold for $160,000 to Mike Maker. Consigned by GreenMount Farm, the son of Northview Stallion Station’s leading sire Great Notion was bred by R. Larry Johnson and raced by ItsTheJHo LLC. He won his debut by two and a quarter lengths at Laurel Park on July 1 and finished second behind fellow Maryland-bred Simply Super in the Hickory Tree Stakes at Colonial Downs on Aug. 8, then ran second in an allowance at Pimlico on Sept. 10 behind eventual stakes winner Super Chow. In his next two starts, he was runner-up in the Maryland Million Nursery on Oct. 22 and ran third in the James F. Lewis III Stakes on Nov. 12, both at Laurel. In total, he has a career record of 1-3-1 from five starts for earnings of $92,500.
Itsthejho purchased Heldish for $40,000 at last year’s Midlantic Fall Yearling Sale. His dam, Everything Magic (by Street Sense), has produced two winners from two starters and is a half-sister to graded stakes-placed juvenile Hopeful Princess. Heldish is from the family of graded winner Street Magician, multiple stakes winner and graded stakes-placed Strike the Moon and dozens of other stakes performers descending from Johnson’s foundation mare Ran’s Chick. 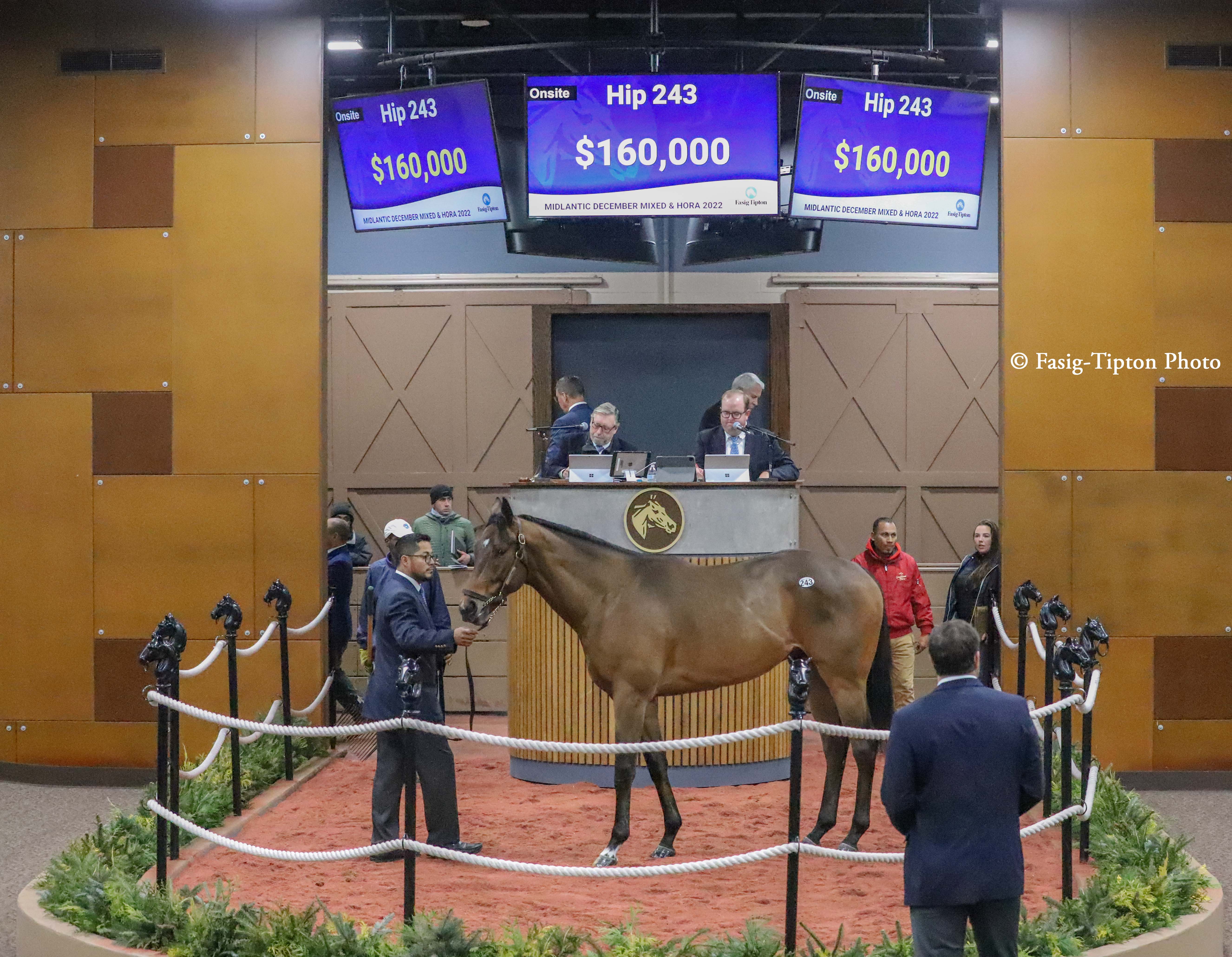 We Dont Need Roads, a two-time winning son of Northview’s first-year sire Hoppertunity, was purchased for $100,000 by Jeff Parthemore. He finished second on debut at Delaware Park on Aug. 11, then broke his maiden next out by three lengths at Delaware on Sept. 8. Unplaced in the Laurel Futurity, he bounced back to win a first-level allowance at Delaware on Nov. 4. Bred by Sycamore Hall Thoroughbreds, he sold for $35,000 to Black Cloud Racing at last year’s Midlantic Fall Yearling Sale. He was consigned by Dreamtime Stables.
We Dont Need Roads is out of Dulcify, a stakes-placed daughter of Candy Ride (Arg). From four foals of racing age, Dulcify has produced four winners, including stakes-placed Lucky Trinity and Sweet Gracie. Her half-sister, stakes winner Hung the Moon, is a stakes producer as the dam of Brill ($235,540, Lady of Shamrock S, 3rd Chandelier S-G1, etc.).
The top weanling of the sale was an unnamed Maryland-bred filly by Global Campaign, who sold for $75,000 to Wellspring Stables LLC. Bred by Country Life Farm & Miss Mystique LLthe weanling was consigned by Bill Reightler, agent for Country Life Farm & Partners. The filly is out of Miss Mystique (by Teuflesberg), who earned $258,283 with a career record of 4-1-3 from 19 starts. Her only other foal, a yearling by Catholic Boy, sold for $34,000 at the Midlantic Fall Yearling Sale earlier this year.
The top broodmare of the sale was Maryland-bred Comfy and Cozy (Curlin), who sold for $60,000 to Marblehead Management. Consigned by Northview Stallion Station, David Wade agent, Comfy and Cozy sold in foal to Union Rags. She’s also produced a yearling by Golden Lad and a weaning by Hard Spun.
A total of 64 Maryland-breds sold for $1,080,600, for an average of $16,884 and a median of $7,750.
Overall, 172 horses sold for a total of $3,233,600, for an average of $18,800 and a median of $10,000.
Complete results are available here.