Fille d’Esprit blossomed in 2022, winning five stakes and placing in five more while racing exclusively in stakes company. She started her 2023 campaign on a promising note, winning the What a Summer Stakes at Laurel Park on Jan. 21 by five and a quarter lengths.
Three of Fille d’Esprit’s wins last year came at Laurel. She won the Conniver (her first career stakes win) in March, the Maryland Million Distaff in October, and Politely in November. However, she was a dull fourth in her final start of the year, Laurel’s Willa On the Move in December. That performance drove up her price in the What a Summer, as she went off the 2-1 second choice in the five-horse field. Willa On the Move winner Swayin to and Fro was the 4-5 favorite. 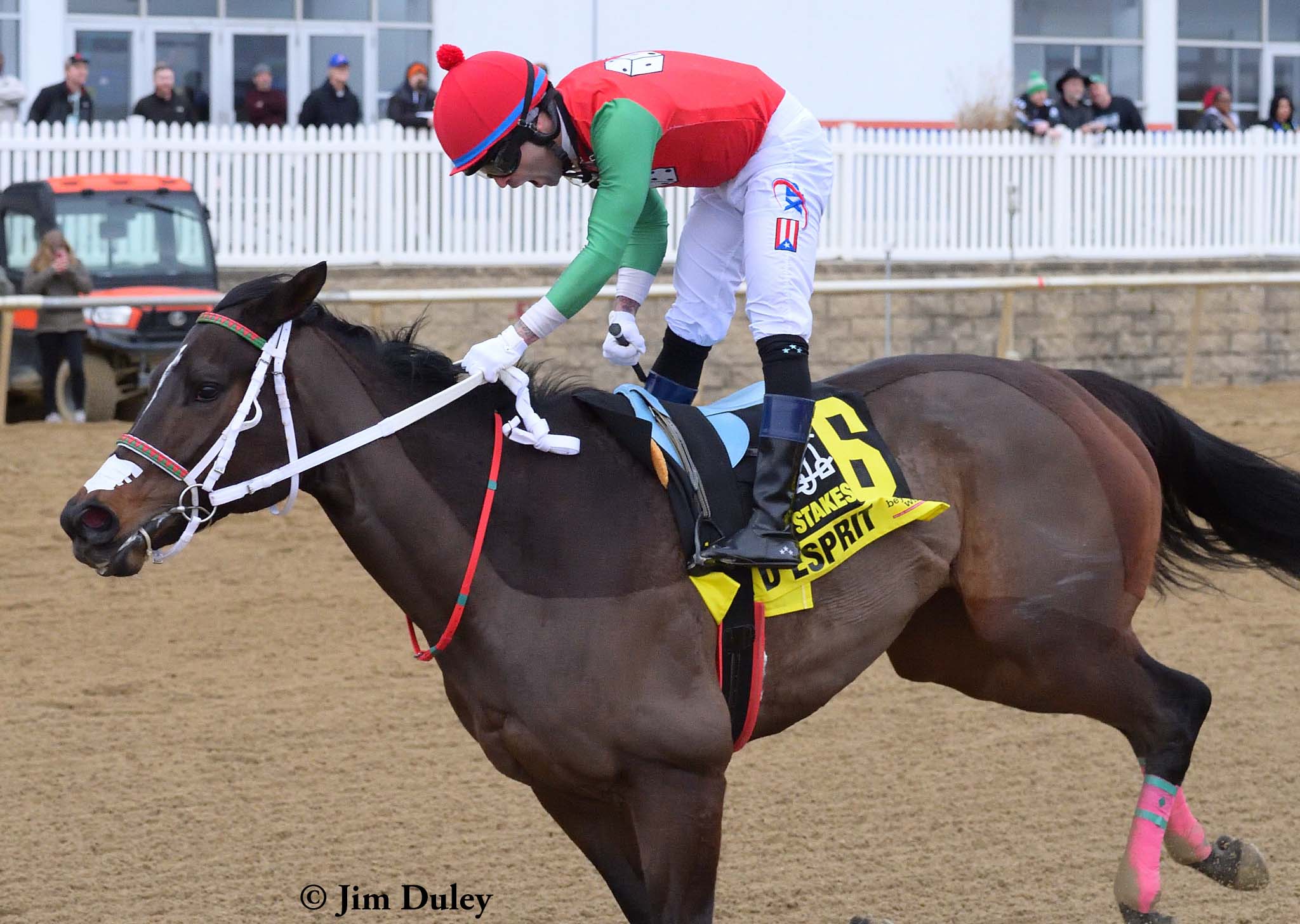 Breaking from the outside post position, Fille d’Esprit began well and drafted off the pace under regular rider Xavier Perez. As they rounded the far turn after a first quarter in :22.52 and the half in :46.45, Perez asked Fille d’Esprit for run, and she moved powerfully towards the lead in the four-path. Swayin to and Fro, disputing the pace from the start, proved no match, and Fille d’Esprit drew off while wrapped up in the final sixteenth, getting six furlongs in 1:11.70.
The win improved Fille d’Esprit’s record to 14-4-2 in 25 starts, for earnings of $685,101. At Laurel, she’s now 12-1-1 from 19 starts. She’s owned by C J I Phoenix Group and No Guts No Glory Farm and trained by Jerry Robb, who claimed her for $10,000 from original owner/breeder Sweet Spirit Stables LLC in August 2020. This was the second stakes win of the day for Robb and No Guts No Glory Farm, following their win, with co-owner Erica Upton, in the Geisha Stakes with Award Wanted.
Fille d’Esprit is by Northview stallion Great Notion, who captured his fifth consecutive leading Maryland stallion title in 2022, with 62 winners and progeny earnings in excess of $4.6 million. The 23-year-old stallion is off to a strong start in 2023, with eight winners and $353,154 in earnings as of Jan. 23.
Fille d’Esprit is the first foal out of her dam, Sweet Valor (No Armistice), whose two foals to start are both winners (from three foals of racing age). Her current 2-year-old is a filly named Never More Valor (by No Never No More); she has a yearling filly named Cross of Valor (by Blofeld) and was bred back to Blofeld for this year.