It was a frigid, late fall day in Baltimore in 1958. On the early morning of Nov. 29, the day of the 22nd running of the Pimlico Special, the Pimlico track was frozen and only three horses were brave enough to face the hottest horse in training, Frank Piarulli and John Brunetti’s 4-year-old colt Vertex. 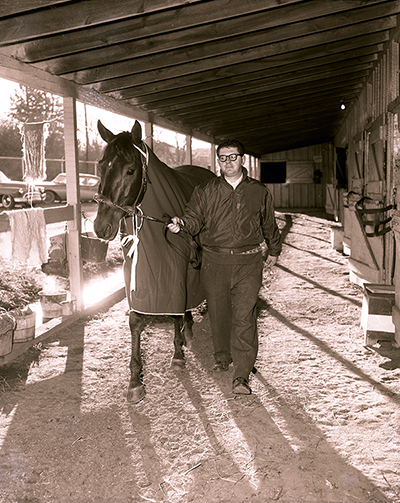 Trainer Joe Piarulli was not keen to run the dark chestnut on a wet track. The best horse his father Frank ever bred and the best he would ever train had battled nagging injuries, including a torn hoof the year before which kept him from the races for more than 10 months. But he was healthy and ready to go. Nearly 55 years later, Piarulli, now 90, recalled the career of Vertex. “He was such an outstanding horse – whenever he was right, I’d just run him. When he did that, he was just in the best shape he could be in.”

Vertex’s final start of the year came in the invitation-only Pimlico Special (which would be the final running of the famed handicap test until its revival 30 years later). The Special was his third race in November, and would be his fourth victory in the span of 31 days. “The race was there, it was a good race,” remembered Piarulli. “When you’d win the Pimlico Special, they’d give you a gold cup too.”

The Maryland-bred, one of the best horses in training for three consecutive years, went postward in the non-wagering exhibition – he would have been the overwhelming favorite. The dirt oval recovered from its frozen state to be listed as muddy after the sun helped thaw it and the clods were broken up with “a Campbell pulverizer.”

The race proved to be no contest, as Vertex turned in his customary no holds barred effort, going to the lead and never relinquishing it as he strolled home to win by 11⁄4 lengths under regular rider and Baltimore native Sam Boulmetis. “He would gallop and just pull away,” said Piarulli.

An account of the race noted that “The winner hadn’t liked the going, and Boulmetis had found it necessary to sting him smartly at the top of the stretch, but he clearly was superior to the others.” At year’s end, the only horses in the nation to rank higher than the Maryland-bred sensation were Bold Ruler, *Gallant Man, Round Table and Swoon’s Son. In the spring of the next year, it was hard to find any to rival him. And from October 1958 to May 1959, when he was finally forced to retire after fracturing a sesamoid in his left foreleg, he boasted the best record of any older horse in training.

“He was an unbelievable animal,” said Piarulli. “You could do anything with him, work with him. . . He got along with every­body. He never did anything wrong. I got him as a 2-year-old. . .He went to Joe Giangiulio’s farm in Philadelphia, in that area. And then as a 2-year-old he came to me to be trained.”

Vertex was foaled at Pistorio Farm in Ellicott City, Md., on April 16, 1954. Frank Piarulli, a New Jersey real estate operator and owner of service stations, bakeries and drive-in restaurants, was friends with Sam Pistorio, who had moved to his Howard County farm in 1952. A builder by profession, Pistorio had purchased 800 acres and used 250 to create the Turf Valley Country Club. Another 150 went for residential development. The rest became Pistorio Farm.

In residence at the farm was the aging stallion The Rhymer, Greentree Stable’s 1942 Widener Handicap winner purchased by Pistorio in 1945 for $10,000. Piarulli sent his Case Ace mare Kanace to The Rhymer because the stallion “sired some good runners considering the class of mares he had.”

The Rhymer had been represented in earlier crops by such stakes winners as Tuscany, Snommis, Singing Beauty and Rare Music. But by far his best was Vertex, who propelled the stallion to the top of the Maryland rankings in 1958 and 1959. In a tragic coincidence, the day before Vertex won the Pimlico Special, The Rhymer was killed in a barn fire at Elmer and Louis Morsberger’s farm in Catonsville. Pistorio had given the brothers the 20-year-old stallion earlier that summer to stand at their farm the next season.

The first stakes winner for the Piarullis, Vertex, then a big, raw-boned youngster, launched his career in New Jersey.

“When he came to me I was based at Monmouth Park,” said Piarulli. “His first race he started was at Atlantic City. I had a boy on him who had never ridden a race in his life. I wanted to win a little money with him and if I put a top rider on him there – but it didn’t make any difference. He went off at like 5-2, paid $8. The stewards, everybody knew he was a great horse and could run.” The chestnut won his first two starts and was fourth in the World’s Playground Stakes in his third and final start at 2.

He continued to get better. “We just had to train him, it was a matter of keeping him sound as much as we could and do what you had to with him,” said Piarulli. “He was a super horse. When he went into a race he was just unbelievable. He won the way he wanted to – he’d just gallop – it wasn’t much of a contest really.”

His record at 3 included a dominating win in the Choice Stakes at Monmouth, just a fifth of a second off the 11⁄8-mile track record, a score in Atlantic City’s Boardwalk Handicap, and a second as the topweight in the Roamer Handicap at Jamaica to Promised Land, who was in receipt of eight pounds. During that race Vertex threw a shoe, which tore up his left front foot and put him on the sidelines. During those months off, Frank Piarulli sold a half-interest in his rising star to John Brunetti.

Piarulli got Vertex back to the races the next September and in four starts from Sept. 9 to Oct. 8, he won just once. But the confidence was building, and he launched the run that would make his career.

“There were two races that really stood out – against the horse that belonged to Calumet Farm (Bardstown),” recalled Piarulli. “The first time we met him, we met him at Garden State and we just beat him. But the second time we met was in New York and it was no contest. He just galloped. And that other horse was an outstanding horse who won something like 20 races, but he couldn’t beat Vertex.”

The Garden State race was the 11⁄4-mile Trenton Handicap, Nov. 5. Vertex won by a head, but it’s what he had to overcome in the race that amazed Piarulli. “The bit had slipped in his mouth – I don’t know if it was a mistake on my part or something – but that bit slipped, and every time they went around a bend, he’d fall back because it was hurting him. But once they straightened up for home, he wound up beating the horse.”

Next out was the Idlewild Handicap at Jamaica. “I made sure that bit didn’t do that again,” added Piarulli. Vertex drew off to win by 5 lengths and finished 11⁄8 miles in 1:491⁄5. It was then on to Pimlico. 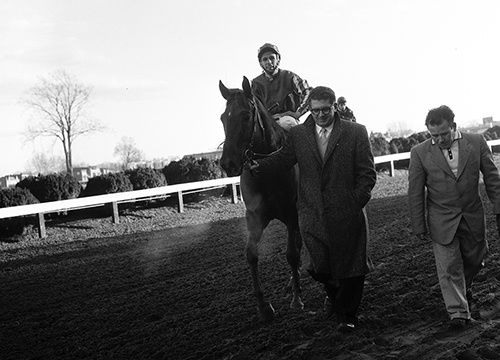 Although the Pimlico Special concluded a stellar season, Vertex was just getting started. Piarulli had him ready much earlier at 5, sending him out March 9 at Gulfstream Park. Vertex finished third, the only time that year he wouldn’t go to the winner’s circle.

Following a win in a “paid workout,” a betless exhibition that Gulfstream Park provided, Vertex went off as the starting highweight and 3-2 favorite in the $100,000 Gulf­stream Park Handicap. Facing 10 others, he fought for the lead the entire 11⁄4 miles, and turned back *Amerigo to win by a neck over a sloppy track. One week later he was in the starting gate at Bowie for the $100,000 John B. Campbell Handicap – his fourth race in 20 days.

The Campbell was magnificent. Leading at every call, he steadily drew off to win by 6 lengths and completed 11⁄16 miles in 1:431⁄5, three-fifths off the track record. And he became only the second horse in history to win two six-figure races in such a short span – the other was Round Table, who won on consecutive weekends, at the same track, in 1957.

Vertex reappeared six weeks later at Jamaica for the Grey Lag Handicap. Carrying 130 pounds, the highest impost of his 24 starts to date, he pulled out a three-quarter-length win. Boulmetis called it “one of the horse’s best races” and added “he felt strong every step of the way,” reported Joe Estes.

Two weeks later Vertex was back in New Jersey. “Gene Mori, who owned Garden State, asked my dad to run him, because he was such a great horse and a lot of New Jersey people were familiar with him,” said Piarulli. “I ran him there and he won the race, but he didn’t come out of the race in good shape. That was his last race.”

Vertex was assigned 131 pounds for the Camden Hand­i­­cap and went off the 2-5 favorite. Again leading at every call, he won by 11⁄4 lengths over Piano Jim, in receipt of 19 pounds. Lame the next day, X-rays were taken, revealing the fracture.

Estes wrote in the 1959 edition of American Race Horses, “Vertex left horsemen wondering what he might have done if he had been sound. . . what he lacked in soundness and good luck was compensated by his class and courage. . . At the end of May, when an injury terminated his career, he had no rival on the morning side of the Rocky Mountains.”

Vertex retired with 17 wins, nine in stakes, from 25 starts over four seasons, earning $453,424, and entered stud at Danada Farm in Lexington, Ky. In his second crop, he sired Kentucky Derby winner Lucky Debonair. He later moved to Brunetti’s Red Oak Farm in Ocala, Fla., where he would remain until his death at 27 in 1981.

Piarulli trained for another 20 years. But he knew during Vertex’s run more than 50 years ago what he had: “He was one of those horses you get once in a lifetime.”R Vertex was inducted in the inaugural class of the Maryland-bred Thoroughbred Hall of Fame in 2013.